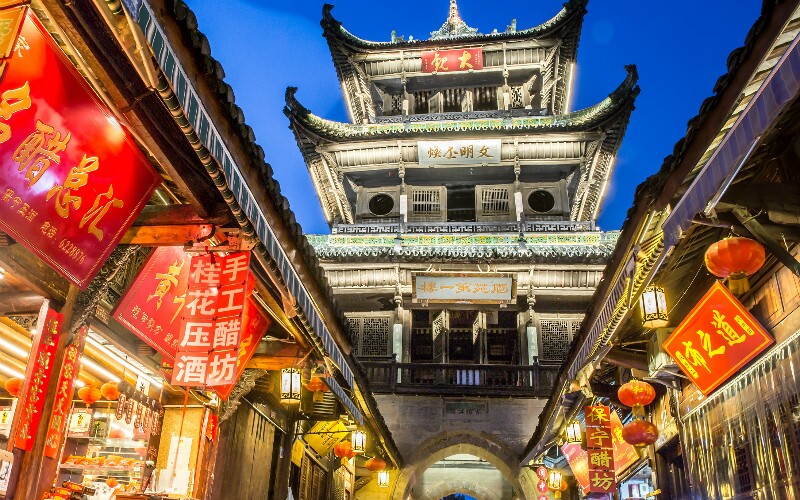 Langzhong enjoys a long history. In the Warring States Period, it was the national capital of the State of Ba. From Han Dynasty to Tang Dynasty, it was the astronomical research centre of China. In Ming Dynasty and Qing Dynasty, Langzhong had been the temporary provincial capital of Sichuan for 19 years at a time. Because of its unique geographical location, Langzhong has been the political, economic, military and cultural center of Sichuan Prvince all along.

Langzhong is one of the birth places of Chinese nation's original culture, and it was found that human beings multiplied and lived there early in the Neolithic period. Other cultures include the culture of Himba, the culture of geomancy, the culture of three kingdoms, the culture of imperial examinations, astronomic culture, religious culture, folk culture, cooking culture and red culture.

The Characteristics of the Scenic Spots

The paper-cut for window decoration there is a wonder of folk buildings. One of the main characteristics of Langzhong's ancient buildings is the dainty and exquisite sculpture and carving with various shapes.

Surrounded by mountains and waters, Langzhong enjoys a reputation as "a fairly land" and the "fortress of Ba City and Shu City". And the long history has granted Langzhong magnificent culture and more than 200 places of interest, which are still shinning brilliantly till now.

Zhang Fei Temple: As a resplendent pearl on the travelling route of three kingdoms'culture, the Zhang Fei Temple can never be missed. Zhang Fei was one of the five valiant generals of Liu Bei, the emperor of Shu-han kingdom in three kingdoms period (220-280 A.D.). After Liu Bei attacked and seized Sichuan, he appointed Zhang Fei to guard Langzhong. During the seven years when Zhang Fei guarded Langzhong, he maintained peace and security in the territory and developed farming and sericulture. However, he was murdered by his two subordinates in 221 A.D. Later, he was buried in Langzhong. Esteeming his loyalty and bravery, the people there built a temple in memory of him.

Other famous scenic spots include:

What is especially worth mentioning is the special food there, which is known to all, far and near: the Baoning vinegar, Zhang Fei Beef, Baoning sweet steamed buns, Baoning wine, preserved duck eggs, noodles cooked with Chinese sauerkraut and tofu pudding, cold beef noodles with sesame sauce, noodles cooked with chopped entrails of sheep and beef, northern-Sichuan bean jelly…

The Baoning vinegar is brewed from rice, maize, high-quality spring and more than 70 elements of Chinese traditional medicine. Having Baoning vinegar can kill the bacteria in humans' bodies, protect people from catching a cold, whet the appetite, invigorate the spleen, clearing away the heart-fire, benefit the lung and reduce blood press.

Zhang Fei Beef tastes palatable, neither salty nor light, neither soft nor hard. Outside the beef is ink-black while inside the beef is red; this is why it is called Zhang Fei Beef, for it is like the image of Zhangfei, a general of Shu-han state in the three kingdoms period, who had a black face but was loyal to his lord. In 1998, the beef won a prize in China's Ministry of Commerce and got a bronze prize in the first Chinese Food Expo.

Baoning sweet steamed buns have neither the soda taste of Chinese-styled buns nor the acescency of western-styled bread. When eaten hotly, the buns taste fragrant, sweet and soft, and when eaten coldly, they taste crisp, sweet and refreshing. And the buns once got a bronze prize in the Panama International Expo in 1912.