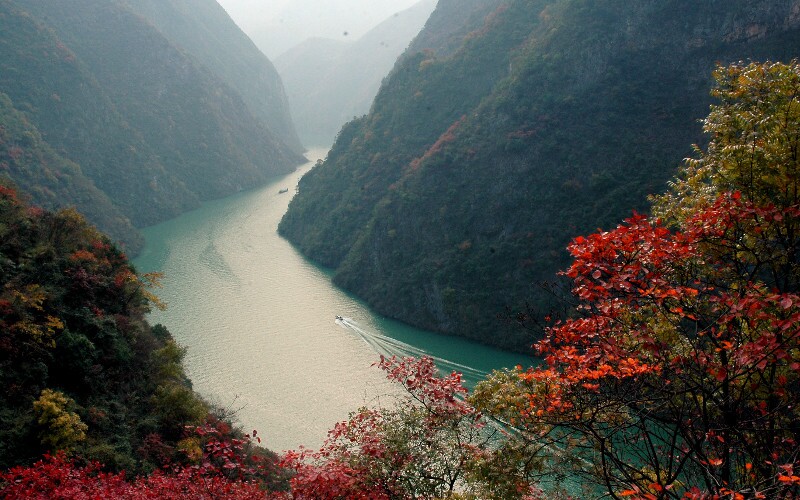 The Lesser Three Gorges are three valleys of the Daning River in Wushan County. They are called Longmen (Dragon Gate) Gorge, Bawu (Misty) Gorge, and Dicui (Emerald) Gorge. They are a destination of some Yangtze River cruises, and you can book a trip that will take you there. Now that the Three Gorges Dam is built, large cruise ships can go in. The gorges are in a forest with wild animals, and there are sheer cliffs and steep hillsides.

Before the construction of the new Three Gorges Dam, people used to say that the scenery in the Lesser Three Gorges on the Daning River was better than that in the Three Gorges on the Yangtze. Before, only small motor boats could go in. It was known for rapids with clear green water. Now large cruise ships can go in. However, the area is still a highlight on a Yangtze River tour.

The Daning is a tributary of the Yangtze. In the past, merchandise and passengers were ferried up and down the river in small boats. The area was a coal mining area, and coal was one of the goods transported.

Before the construction of the dam, people on the boats used long poles to move and control their boats, pushing hard against the river bottom and the cliffs. People would pull the boats with ropes from the shore walking along ancient paths cut into the rocks. The river gorges were known as a serene area without a lot of crowds.

There was an ancient city called Wushan on the northern bank of the Yangtze near where the Daning and Yangtze merged. That is destroyed, and a new town was built above the water level on the hill.

Traveling on the Yangtze to the east of the Lesser Three Gorges is Shibaozhai Temple that looks like a pyramidal-shaped pagoda, and further east is the Fengdu Ghost Temple. About 60 kilometers directly south of Fengdu is the Wulong Karst area with good hiking among spectacular natural karst scenery, natural bridges and big caves and pits. The Wulong Karst area is a natural preserve area with many endangered animals and plants. You can travel to Wulong Karst overland or take a boat on the Wu River that is another tributary of the Yangtze.