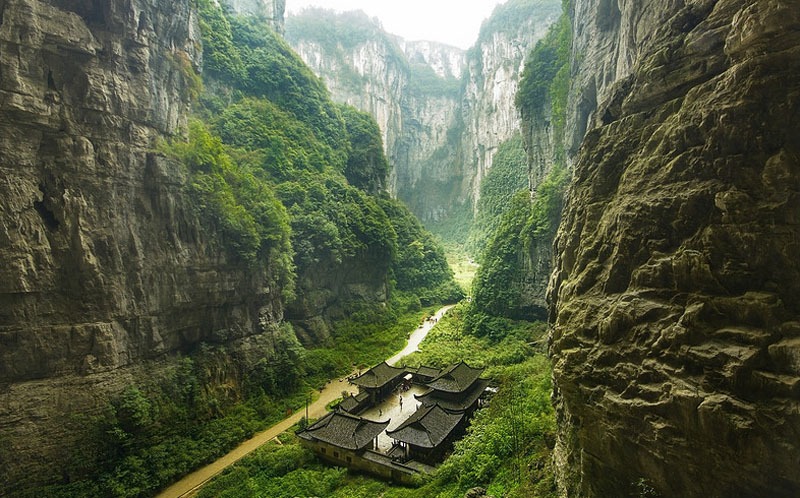 Wulong with its stunning natural scenery and hiking highlights is listed on UNESCO World Heritage List. It has become one of the major attractions around Chongqing for people interested in primitive scenic areas, gorges, wildlife, and caves.  Wulong, along with Libo and Shilin karst, are the three regions named on the World Heritage List’s South China Karst.

Weathered karst hills, cliffs， rocks, deep gorges and stone bridges are the main attractions in Wulong Karst Region. The rugged scenery is beautiful and unusual like that around Guilin in Guangxi Province.

For those who have seen the desert scenery in the American southwest, the above-ground karst formations are much like the sandstone mesas, bridges, and towers. But the subterranean karst features of caves, pits and underground streams are perhaps even more interesting.

The main parts of the Wulong Karst are Furong Cave, the Three Natural Stone Bridges and the Houping Tiankeng (Houping Collapsed Doline). The three natural bridges are the most popular.

The three main areas are about 15 kilometers apart, and you can expect some good hiking and walking around in the area so bring proper clothes.  Since its inclusion in the World Heritage List in 2007 Wulong has experienced a jump in popularity, so many new roads, hotels and restaurants have been built.

An Important Filming Place for Transformers 4 Age Of Extinction

Wulong Karst landscape is an important filming place for Transformers 4 Age of Extinction.

Wulong Karst Region is about 205 kilometers from Chongqing. Local tour companies offer one-day and two-day trips to the area. The one-day trip is a bit tight for time, as it is a long drive (3.5 hours) from Chongqing. Travelers who like natural scenery may find the trip to Wulong worthwhile. Contact China Highlights to tailor make a trip to Wulong