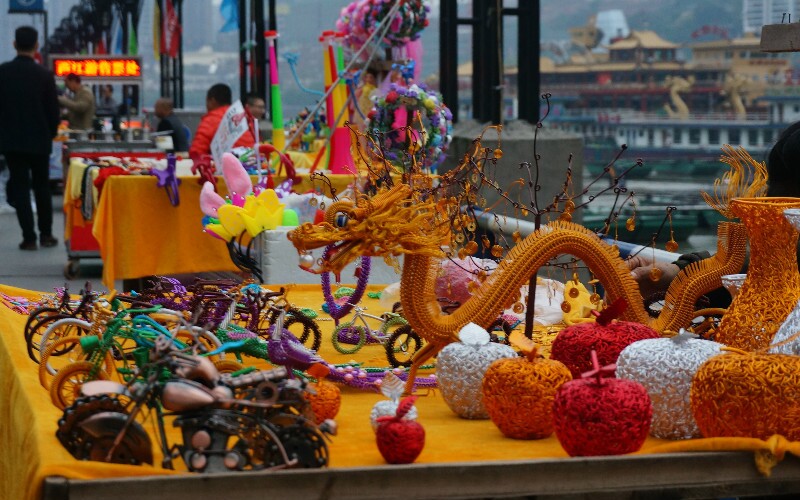 Shu embroidery (Shu 蜀 is the shortened form of Sichuan), also called "Chuan embroidery", is one of the four famous embroidery styles in China, others being the Su embroidery (苏绣) of Jiangsu Province, the Xiang embroidery(湘绣) of Hunan Province and the Yue embroidery(粤绣) of Guangdong Province. It has been enjoying high reputation as "a treasure of Sichuan" ever since the Han Dynasty.

Shu embroidery is renowned for its superb workmanship, smooth and bright in quality, with strong expression and artistic effects. Its features are said as "fine and smooth needlework, simple and elegant colors, graceful and easy lines and the traditional Chinese paintings "style".

In 2006, it was listed in the national intangible cultural heritages.

Jiangjin swelled candy rice, produced in Jiangjin District, is one of the famous specialties of Chongqing. It is made of glutinous rice, walnuts, peanuts, sesame, sugar, animal and vegetable oils, caramel and rose sugar through more than 10 procedures. The white crystalline products are sweet and crisp, with rich nutrition. Jiangjin swelled candy rice has a long history and is popular in over 200 cities, such as Beijing, Guangzhou, Shenzhen, Shanghai and Kunming at home, and cities in America and New Zealand.

Made from mustard root, a large, radish-like vegetable indigenous to Fuling, a district of Chongqing municipality in southwest China, the traditional dish's history can be traced back more than 100 years. Nowadays, whether in a convenience store or a supermarket, Fuling-made pickles are often one of the most common items on the shelves. Approved as a geographical indication by the State Administration of Industry and Commerce in 2000, the processed vegetable is now a pillar industry in the district. Besides, its production procedures were listed as national intangible cultural heritage in 2008, and it was praised at a 2009 international seminar as an example of how a geographic product can help advance a rural economy. Fuling pickles are now exported to more than 50 countries and regions, including Southeast Asia, Europe and the United States.

Whenever arriving at Chongqing, travelers shall not miss Jiefangbei in Yuzhong District. Here run at least 20 super commercial centers, as well as bookstores, theaters, bars and restaurants. In addition, there is a biggest snack bar 300 meters from the Jiefangbei. Visitors can have the chance to taste all kinds of snacks while buying some souvenir.

Guanyinqiao Walking Street, one of the famous commercial streets in China and the biggest commercial circle in Southwest China, is located in Jiangbei District(江北区), with a length of 400 meters. It integrates shopping, leisure, food, entertainment and fitness.

For Furniture and the Household

For Computers and Electronics