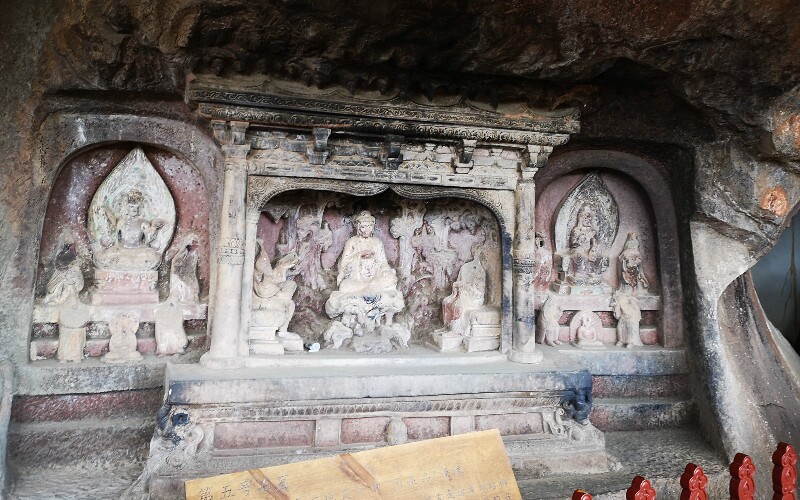 On Precious Stone Mountain (Shibaoshan in Chinese), there is a pass called Lion Pass where there are historically important and well preserved rock carvings of a Nanzhao king with his family, a person who is probably not a Han Chinese with a dog, and a Persian. These carvings were only recently discovered and are well preserved, and they are considered historically important. This group of rock carvings at Lion Pass is one of the three most important groups of carvings that have been found on Precious Stone Mountain. The Lion Pass frescoes all show Persian, Indian and Tibetan influences. The three interesting groups of images at Lion Pass help us to understand the history of the Nanzhao Empire and the development of China’s religions better.

In the first grotto, there are the statues of the King of the Nanzhao Kingdom, other people and children. It isn’t clear who the people actually are, but people assume that the children are his children, and that a woman is his wife, and that there are courtiers or maybe concubines. People like to think that this is a family portrait. Other people think that the fresco shows several concubines and their children. The sun and moon are carved on the left and right sides of the grotto. An interesting feature superimposed on the images of the people is some sort of wave-like pattern or ripples.

The second grotto is about 1.8 meters high and about a meter and a half wide. There is a carving of someone with a straight nose who is wearing a hat and a pair of boots and things in his hands. There is also a carving of a dog. Since Han Chinese usually do not have straight noses, perhaps this was an Indian or a person of another nationality. Buddha was an Indian, so maybe it is a depiction of him.

The third important image is in a grotto at the bottom of Lion Pass. The man represented there is a Persian. Its face has been damaged, but you can still tell that the statue had deep eyes and a straight nose. It has a pair of boots.

The frescoes show the influence of foreigners on the Nanzhao Kingdom’s religion and economy. India, Persia, and Byzantium imported Tang Dynasty and Nanzhao silk and other products. High quality silk cloth was highly prized by the wealthy in Europe and Byzantium. The Nanzhao made high quality silk products, and the silk and other goods were transported to the west via the Tea-Horse Road that ran through the Nanzhao Empire. Constantinople was at the end of the silk trade routes. The trade routes helped to make the cities in Persia and Byzantium that lay on the western terminus of the land trade routes wealthy. The Nanzhao rulers became wealthy through control of the trade as well, so they were able to fund their armies and build their large temple complexes and buildings. It is this trade that may partly explain why there were Persians and other Westerners in the Nanzhao Kingdom.

The Lion Pass carvings are some of the finest on the mountain, and they were only recently discovered. The images were carved well over 1,000 years ago and were forgotten for centuries, but they help us to understand the history of the Nanzhao Empire and of China. Officials are attempting to preserve the frescoes, and flash photography is forbidden.

Near Lion Pass, there are two other important groups of grottoes with carved images. The highlight for historic frescoes is the grottoes at Stone Bell Temple, and the carvings at Shadeng Village are also considered important.

The Stone Bell Temple Grottos are called by several names in Chinese: the Jianchuan Grottos, the Shizhongshan Grottoes, and the Shibaoshan Grottoes. The artwork is considered among the best ancient art work that has been found in southern China. The carvings and frescoes include images of historical figures and depict the transmission of Buddhism into China. Some of the images have strikingly Indian-looking features. And the frescoes and statues show influence from Tibet, India, Burma, and Persia. The depiction of Nanzhao rulers meeting Persians is interesting. The structures and artwork in the site are exceptionally well preserved.
The other historically important site is Shadeng Village. The stone carvings in the first site are divided into two floors that have statues of Buddha or buddhas. There is an inscription stating the year 841 in terms of the reign in years of a Tang Emperor. The other three sites there all have Buddha frescoes.

Shaxi Township in the valley at the foot of the mountain is interesting since it was once a stopping place for caravans on the Southern Silk Road between Dali and Lijiang. It is a Bai village that is being restored by the local government and workers with the World Memorial Fund for Architecture, an international fund for the protection of world heritage sites. In 2001, the Sideng Market area of Shaxi Township was added to the World Monuments Watch List of 100 Most Endangered Sites because it is said to be the only surviving example of a market town on China's old caravan roads. Since then, the local government and foreign institutions have funded the reconstruction of the village. The restoration work that is carried out by foreigners has won major awards, including a UNESCO Award of Distinction for cultural heritage preservation.

Precious Stone Mountain is a mountain above Shaxi Valley and Shaxi Township. Shaxi Township is about 4 hours away from both Dali and Lijiang. Travel isn’t difficult. A road connects Lijiang and Dali, and the valley is west of the road. A side road that enters the valley intersects with the main road at the little town of Diannan. The distance from Diannan to Shaxi is about 25 kilometers. There is also bus service from the town of Jinchuan which is about 10 kilometers north of Diannan on the main road. Travel from Dali to Shaxi by bus takes about 3 and a half or 4 hours. Travel from Lijiang to Shaxi by bus takes about three hours. Travel from Kunming takes about 9 hours.

To see the sights on Precious Stone Mountain, you can hike two hours from Shaxi Township and hike along the various paths. You can also rent bikes. Tour vans are also available, as well as private taxis. There is a parking lot in front of Shizhong Temple, and a road between it and Xuankong Temple. But to really enjoy the dozens of sites and the natural scenery on the mountains, including seeing the sites on the peaks and the mountain views, hiking is the best way to travel. You can walk on paths trod by native villagers for centuries.
There are cruise boats from Jianchuan and from Dali to enjoy the scenes in the river valley and the countryside.