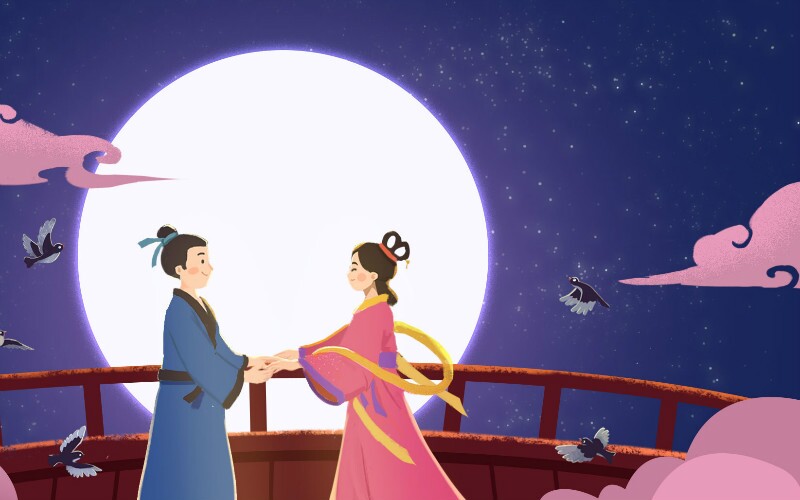 The Qixi Festival (Double Seventh Festival) is one of Chinese traditional festivals, and also known as the Chinese Valentine's Day. It's based on a romantic legend about a weaver girl and an ox herd.

The date is based on the Chinese lunar calendar, so it's about 21 to 51 days after the Gregorian date , i.e. in the period July 28 to August 28.

The History and Traditions of Qixi Day

The festival has been celebrated since the Han Dynasty (206 BC – 220 AD). On May 20, 2015, the Double Seventh Festival was added to the National Intangible Cultural Heritage list by the State Council of China. Many of the traditional customs are disappearing, or no longer observed. You are more likely to find these practiced in rural areas:

How Is the Qixi Festival Celebrated

Double Seven Festival (Qixi) is the most romantic of traditional Chinese festivals, and since China's globalization it's become known as "Chinese Valentine's Day".

Now people usually celebrate Chinese Valentine's Day by giving flowers, chocolates, and other presents to their sweethearts, instead of doing the traditional customs.

Though in Chinese cities, Western Valentine's Day is now more popular than Qixi with young people, the romantic legend of Niulang and Zhinü has taken deep root in the hearts of Chinese people. It probably always will be told from one generation to the next...

The Legend of Qixi Festival

Qixi Festival originated from the legend of the cowherd and the weaver girl (Niulang and Zhinü).

An oxherd Niulang with the help of his ox (the demoted cattle god) married a fairy, Zhinü, who became a weaver girl. Zhinü's mother, a goddess, returned Zhinü to heaven. Niulang pursued using the ox's hide. The goddess separated them by a river of stars (the Milky Way), but magpies were allowed to form a bridge for them to meet once a year (Qixi).

Want to know if she/he is compatible with you? Use our zodiac love compatibility calculator. Take the test and see...