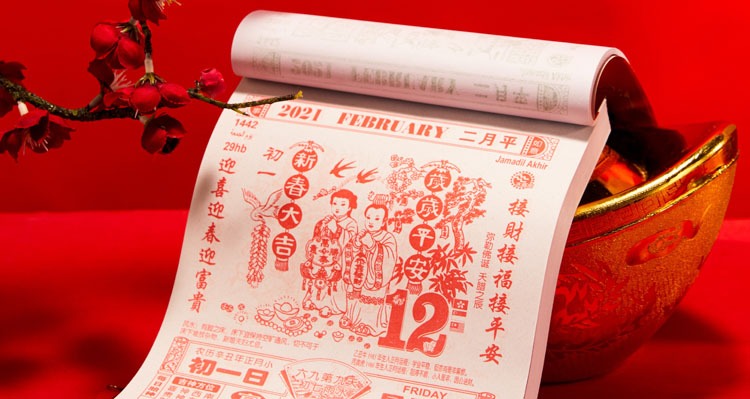 The Chinese calendar has 12 or 13 lunar months per year, and is about 20 to 50 days behind the Gregorian calendar. It’s used to determine the dates of traditional Chinese festivals, like Chinese New Year and Mid-Autumn. It’s also used for Chinese zodiac astrology, and many Chinese still celebrate their Chinese calendar birthdays.

What is Chinese Lunar Calendar and How it Works?

The Chinese calendar is also called the lunar calendar, yin calendar or Xia calendar in China. The Chinese calendar is based on the orbits of the moon and earth. When the moon moves into a line with the earth and the sun, it comes the first day of the lunar month. When the moon is full, it comes the middle of the month. So there are 29 or 30 days in a month. There are 12 or 13 months in a lunar year. For 12 months, there will be 354 or 355 days in a year. To compensate the other 10 days with the Gregorian calendar, there is a leap month for about 2 or 3 lunar years.

In ancient China, the Chinese calendar was used to choose the dates for farming, weddings, and building and moving into new houses. Nowadays, most Chinese people use the Gregorian calendar for their daily life arrangements. But most Chinese still care about lunar dates because traditional festivals are based on the lunar calendar.

Ancient Chinese people used the 12 heavenly systems and 10 earthly branches to name each hour of a day. The Western hour-minute-second system was brought into China in the Qing Dynasty (1644–1912). On a Chinese calendar, all dates use a regular two characters.

The length of a Chinese calendar month is not fixed from year to year. There are 29 days in a short month, which is also called a ‘small month’ in Chinese, while there are 30 days in a long month, called a ‘big month’. In this way, a 12-month lunar year (with six 29-day months and six 30-day months) has only 354 days.

To keep the lunar calendar in synch with solar cycles (which thereby compensates for lost days compared to the Gregorian calendar), there is a leap month every two or three lunar years.

As a lunar month is on average 0.92 days shorter than a "solar month", the lunar calendar is just under a day per month slower than the solar calendar.

To prevent the lunar calendar from becoming more than half a month of sync with the solar calendar, an extra "leap month" is added in the Chinese calendar every 32 or 33 months. So every second or third Chinese calendar year has 13 months and 383–385 days.

The last Chinese calendar leap month was in 2020. There were two fourth lunar months: month 4 and then "intercalary month 4" - the leap month.

The next leap month will be in 2023, when a second lunar month 2 will be observed.

Ancient Chinese people named each lunar month according to what they or nature traditionally did in that month. See below.

A Chinese calendar is based on the movement of the moon. When the moon moves into a line with the earth and the sun, the new lunar month begins. When the moon is full, it is the middle of the month. The circle is about 29 days. The lunar month has 29 or 30 days for a month. Gregorian calendar is calculated by the movement of sun, which has 30 or 31 days for a month. There is 21 to 51 days behind the corresponding Gregorian calendar date (intercalary months excepted).

How People Use Chinese Calendar

Chinese people use the lunar calendar to define the Chinese traditional festivals, 24 solar terms and choose a lucky day for wedding, building or moving into new house and so on.

If you want to know the date of a traditional Chinese Festival, then you must know its lunar calendar date before looking it up for a particular year.

The Chinese zodiac year is (popularly) based on the lunar calendar. A zodiac year is from the first day to the last day of a lunar year, starting/ending at some point in January/February of the Gregorian calendar. For example, 2022 will be the year of Tiger, which is from Feb. 01, 2022 to Jan. 21, 2023.

There are twelve animals in the Chinese zodiac: Rat, Ox, Tiger, Rabbit, Dragon, Snake, Horse, Sheep, Monkey, Rooster, Dog, and Pig. The twelve animals are always in this order in the cycle and each one represents a year. If you want to find out your zodiac animal, then check your birthday according to a Chinese calendar, especially if you were born in January/Febraury.

In ancient China, the royal family used the Chinese gender calendar to predict the gender of their babies in order to give birth to more boys, keep power, and preserve the family succession.

Many Chinese parents have used the same methods to predict their babies’ genders by a calculation using the woman's birth date and her baby's due date according to the lunar calendar. Her lunar age when she got pregnant and the lunar date of conception yield a prediction as to whether the baby will be a boy or a girl.

Nowadays, most Chinese parents do not use this method as they don’t care too much about the gender of the babies (and some doubt whether it works).

Chinese people use the lunar calendar to choose a good date for important events such as weddings or commencement of building a house. Some dates on a Chinese calendar are considered not good for weddings or moving house, while there are other days that are recommended for doing certain things.

The 3rd and 17th days of each lunar month are considered unlucky days.

Auspicious days are chosen by some fortunetellers, particularly in countryside areas of China. When choosing the date for getting married, the bride and groom each submit their time, date, month, and year of birth to a fortune teller who calculates the best date for getting married. This is called the matching of astrological birth data known as 生辰八字 (shengchenbazi).

Chinese wedding date is based on lunar date

In the traditional Chinese solar calendar (called the yang calendar), a year was divided into 24 parts, each of 15 or 16 days, called the 24 solar terms, which were defined by the sun’s position relative to the earth.

In ancient China, people used the 24 solar terms to define the four seasons and determine the right time to grow crops and harvest them. For example, the first solar term is called Li Chun, which means ‘Beginning of Spring’. It is the time for planting rice in south China. Read more on The 24 Solar Terms.

Naming the Years and the 60-Year Cycle

Chinese use the 10 Heavenly Stems and 12 Earthly Branches to name the years.

When a new lunar year comes, the heavenly stem and earthly branch each move on to the next one and combine to form the year’s name — always an odd (yang) stem with an odd (yang) branch or even (yin) stem with even (yin) branch. And so, the 10 heavenly stems and 12 earthly branches combine in a 60-year cycle (the 30 yang combinations interposed with the 30 yin combinations).

In ancient China, people believed that all things in the world were composed of five elements, which were called Metal, Wood, Water, Fire, and Earth. Each element was associated with a 12-year zodiac cycle, producing another 60-year cycle to parallel the Heavenly Stems and Earthly Branches year system.

Many Chinese use their birth date to find out the element they belong to as well as their zodiac sign to predict their luck in marriage, career development, or business success. See more on Five Elements Theory.

The History of the Chinese Lunar Calendar

Existing possibly for 4,000 years in some form, the uncertain early history of the Chinese lunar calendar can be traced back to questionable Zhou Dynasty writings about the Xia Dynasty (21st century BC – 16th century BC). So, the Chinese calendar is also called the Xia calendar.

However, the Chinese lunar calendar was not definitely known to have been developed until the Spring and Autumn Period (771–476) of the Zhou era, whose preserved Confucian classics recorded its use.

The succeeding dynasties continued to use the lunar calendar and made some small changes from time to time. The lunar calendar was called the Taichu calendar during Han Dynasty (206 BC – 220 AD) and Huangji Calendar in Tang Dynasty (618–907). Other Asian countries with cultural links to China, such as the Koreas, Vietnam, and Japan used the Huangji Calendar of the Tang Dynasty until modern times.

Your China Tour and the Chinese Calendar

The Chinese calendar affects festivals, and hence the busiest times for travel in China. These are times to avoid traveling in China unless you want to take part in the festivities.