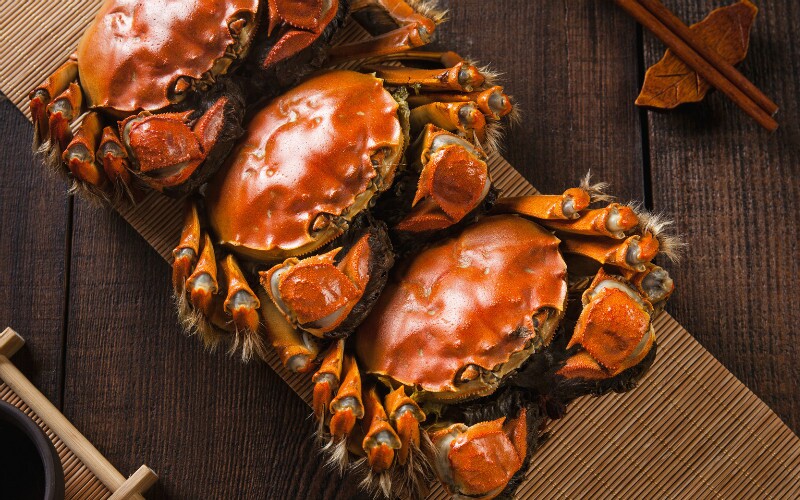 The Mid-Autumn Festival began in the early Tang Dynasty (618–907) and became prevalent in Song Dynasty (969–1279). Until the Ming and Qing dynasties (1368–1911) it was on a par with Chinese New Year as one of the top traditional festivals in China.

The four most well-known customs now are worshiping the moon, eating mooncakes, flying lanterns, and eating a reunion dinner. However, some customs have vanished, or are rapidly disappearing, like these six:

1. A Moonlit Crab Crawl — to Bring Wealth and Fortune

Crabs with candles on their backs doing the "moonlit crab crawl".

Every Mid-Autumn Festival, there was once a custom called 'crab crawl moon' along Tianjin's coast. On the evening of the Moon Festival, people put small candles or oil twists on crabs' backs. Then let them loose in the yard to observe their movements.

Mothers would tell their children to drive the escaping crabs back into the yard, to reverse the trend of bad luck. Finally, after a hard crawl, those crabs that brought the hope of becoming richer to the family would be placed in a steamer, and became the family's dinner.

Mooncake is an indispensable food during the Mid-Autumn Festival. It is customarily offered between friends or on gathering while celebrating the festival. Typical mooncakes consist of a thin, tender pastry skin enveloping a sweet, dense filling, and may contain one or more whole salted egg yolks in their center as a symbol of the moon.

Mooncakes used to be made at home, but very few people make them at home nowadays. Mooncakes on the market are various, some are low-cost for home consumption; others are expensive gift-packaged mooncakes for presenting to friends, guests, etc. With their hectic lives, nowadays people prefer to buy well-packaged cakes from the markets and shops instead of making them themselves.

Childless women go to other people's fields to "steal" pumpkins and beans.

On Mid-Autumn night, melon and bean growers normally not only did not mind the "stealing", but regarded it as a joy. With the development of society, and the two-child policy now in place in China, the phenomenon of sex discrimination has been improved. Nowadays, the custom of touching pumpkins and beans under the moonlight is not so popular as it used to be.

In the Ming and Qing dynasties, there was a popular custom of "fire lanterns" on Mid-Autumn Festival's night. Different from the Lantern Festival, people lit "pagoda lanterns". This custom used to be very popular in South China.

Burning pagodas on Mid-Autumn night was once a popular custom.

A tower structure was built with bricks and tiles, then wood and bamboo was placed inside and burned at night. In the Qing Dynasty (1644–1911), villagers in Suzhou used tiles to build a seven-story pagoda in the wild. They worshiped the King of the Inferno and lit lamps round the burning pagoda. It was traditionally believed that burning these towers could bring luck for their lives and their harvests. The brighter and stronger the fire was, the better.

In Guangzhou, there were also similar activities. Children would carve a shaddock (pomelo) skin into various characters and plants, then put a colored lantern inside it. These were called shaddock lights.

5. Worshipping the Moon — for a Happy Life

Now abundant entertainments and social networking software have people's attention. People tend to stay inside watching television or using their mobile phones. The custom of worshiping the moon is far from as popular as it used to be.People used to worship the moon after the Mid-Autumn Festival dinner. Families gathered in their front yards or on their roofs, and then put mooncakes, fruits, incense, and candlesticks on an altar (or table). The younger generation would follow their elders to express their respect to the moon and hopes for a better life.

6. Eating a Reunion Dinner at Home — to Celebrate the Harvest

In the past, the whole family would start preparing the reunion dinner in the morning, and traditional dishes included duck and lotus root. It was when (rural) family members got together to celebrate the harvest.

Though people still come together for a reunion dinner on Mid-Autumn Festival, the dining place has changed. Many choose to eat in restaurants rather than make dishes themselves at home. Restaurant food can never measure up to mother's home-cooked dishes!