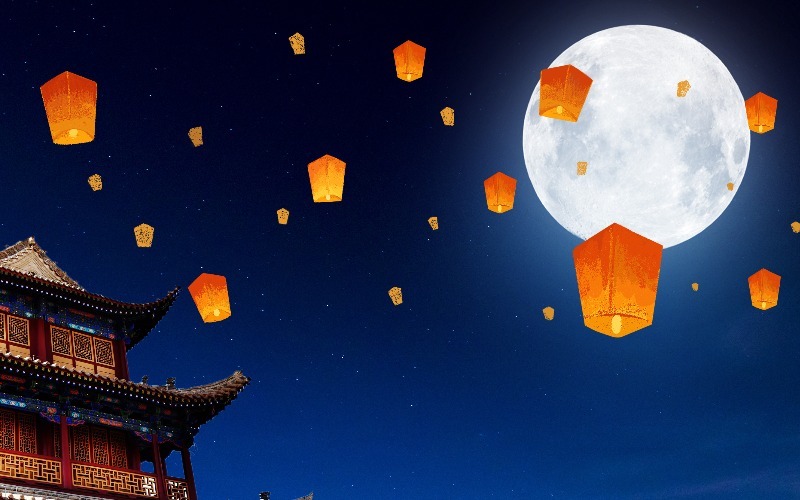 Mid-Autumn Festival, Zhongqiu Jie (中秋节) in Chinese, is also called the Moon Festival or the Mooncake Festival. It is the second most important festival in China after Chinese New Year. It is also celebrated by many other Asian countries, such as Singapore, Malaysia, and the Philippines.

In China, Mid-Autumn Festival is a celebration of the rice harvest and many fruits. Ceremonies are held both to give thanks for the harvest and to encourage the harvest-giving light to return again in the coming year.

It is also a reunion time for families, a little like Thanksgiving. Chinese people celebrate it by gathering for dinners, worshiping the moon, lighting paper lanterns, eating mooncakes, etc.

Mid-Autumn Festival traditionally falls on the 15th day of the eighth month of the Chinese lunar calendar, which is in September or early October on the Gregorian calendar. As, traditionally, the four seasons each have three lunar months, day 15 of month 8 is "the middle of autumn", hence the festival's lunar date. For more, see How the Date of Mid-Autumn Festival Is Determined.

Why Mid-Autumn Festival is Celebrated?

Mid-Autumn Festival has a history of over 3,000 years. It was derived from the custom of worshiping the moon in autumn to thank it for the harvest.

In the process of cultural/historical developments, Mid-Autumn Festival has been infused with more meanings, including families gathering together and praying for good health and happiness.

In modern times, people mainly celebrate Mid-Autumn Festival as a time for family reunions. It is said the moon on this day is the brightest and roundest, which has come to mean family reunion. Because of the central theme of family reunion, sometimes the festival evokes comparison to Thanksgiving in the U.S.

You might want to read more on Mid-Autumn Festival Origins or 10 Interesting Mid-Autumn Facts.

As the second most important festival in China, Mid-Autumn Festival (Zhongqiu Jie) is celebrated in many traditional ways. Here are some of the most popular traditional celebrations.

1. Enjoying a Dinner with Family

The roundness of the moon represents the reunion of the family in Chinese minds. Families will have dinner together on the evening of Mid-Autumn Festival.

The public holiday (usually 3 days) is mainly for Chinese people working in different places to have enough time to reunite. Those staying too far away from their parents' home usually get together with friends.

Mooncakes are usually eaten after dinner while admiring the moon. Click to know Mooncakes — Symbols, Flavors, Regional Varieties, and How to Eat Mooncakes.

The full moon is the symbol of family reunions in Chinese culture. It is said, sentimentally, that "the moon on the night of Mid-Autumn Festival is the brightest and the most beautiful".

Chinese people usually set a table outside their houses and sit together to admire the full moon while enjoying tasty mooncakes. Parents with little kids often tell the legend of Chang'e Flying to the Moon. As a game, kids try their best to find the shape of Chang'e on the moon.

There are many Chinese poems praising the beauties of the moon and expressing people's longing for their friends and families at Mid-Autumn.

According to the legend of Mid-Autumn Festival, a fairy maiden named Chang'e lives on the moon with a cute rabbit. On the night of the Mid-Autumn Festival, people set a table under the moon with mooncakes, snacks, fruits, and a pair of candles lit on it. Some believe that by worshiping the moon, Chang'e (the moon goddess) may fulfill their wishes.

Lanterns are a notable part of Mid-Autumn Festival. People make lanterns, carry lanterns to do moon gazing, hang lanterns in trees or houses, release sky lanterns, or visit public lantern displays, hence it is even be known as a lantern festival (not to be confused with the Lantern Festival on the full moon after Chinese New Year).

Lanterns have long been associated with the festival since the Tang Dynasty (618–907), possibly because of their traditional symbolization of luck, light, and familial togetherness.

Mid-Autumn lanterns have many shapes and can resemble animals, plants, or flowers. A tradition is to write riddles on lanterns so that people can enjoy solving them with friends or family.

In modern times, besides traditional activities, many Chinese people send WeChat red envelopes and/or go traveling during the 3-day public holiday to celebrate the festival.

Mid-Autumn Festival in other Asian Nations

In many Asian communities besides China, Mid-Autumn Festival is widely celebrated. Many interesting activities with unique local features are held.

In Singapore, Malaysia, and the Philippines — three countries with many ethnic Chinese citizens — the celebrations are more Chinese, such as lighting lanterns and dragon dances. The date is also the same as in China, but there is no public holiday.

There are many legends about Mid-Autumn Festival. The most popular stories are about Chang'e and the Jade Rabbit.

The Story of Chang E — Chinese Goddess of the Moon

The origin of the Mid-Autumn Festival is associated with the popular legend of Chang'e (嫦娥), the goddess of the moon…

Hou Yi, the husband of Chang'e, was rewarded with an elixir of immortality by the Queen Mother when he shot down nine of the ten suns and saved people from their smoldering heat. He did not drink it straight away because he did not want to gain immortality without his wife. So, he asked Chang'e to keep it safe for him.

Unexpectedly one mid-autumn day, while Houyi was out hunting, an evil person tried to force Chang'e to hand over the elixir. Chang'e swallowed the elixir however and flew higher and higher. She then chose the moon as her immortal abode, to be close to her beloved husband and look down on him on Earth. Hou Yi was very sad and made sacrifices to Chang'e with incense, cakes, and fruits.

Along with the legend, the custom of worshipping the moon on Mid-Autumn day has been passed down from generation to generation.

Click to know another version of the story you didn't know.

The Story of the Jade Rabbit

Legend has it that there is a rabbit on the moon, white as jade, so it is called 'jade rabbit'. In Chinese folklore, the jade rabbit is a companion of Chang'e. It constantly pounds the elixir of immortality. As time passed, the jade rabbit became synonymous with the moon in Chinese culture. Get to know the Top 5 Interesting Things about the Jade Rabbit.

See more details on our page about stories of the Mid-Autumn Festival including one more story about Wu Gang Chopping the Cherry Bay.

Mooncakes and Other Mid-Autumn Festival Foods

Celebrating the harvest is one of the most traditional meanings of Mid-Autumn Festival, thus harvest foods are favored during the festive period.

Mooncakes are the must-eat Mid-Autumn food in China. They are a traditional Chinese pastry. Chinese people see the roundness of mooncakes as a symbol of reunion and happiness.

Other foods eaten during the festival are harvest foods, such as crabs, pumpkins, pomelos, and grapes. People enjoy them at their freshest, most nutritious time, and enjoy their auspicious meanings that are particularly associated with round foods.

Read more on Mid-Autumn Festival Foods and Their Meanings.

Other popular sayings are usually related to the moon or reunion. For example: