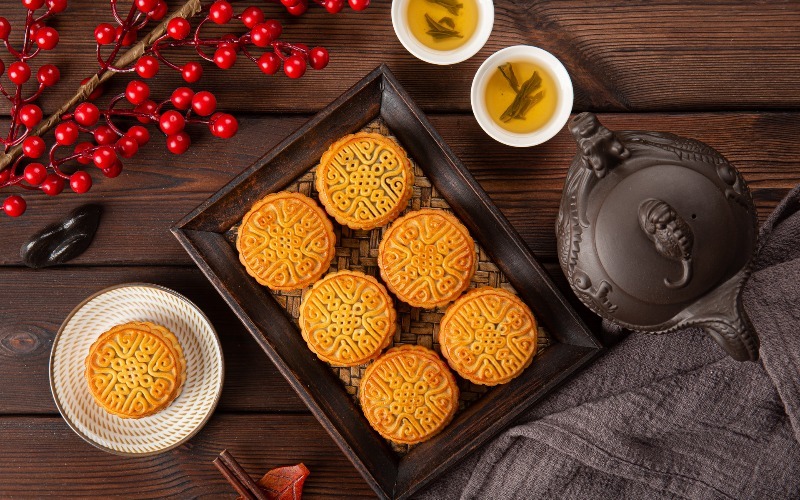 The Mid-Autumn Festival falls on the 15th day of China’s 8th lunar month, traditionally China's harvest time. Every home prepares various foods to celebrate the festival. The most popular Mid-Autumn Festival foods include mooncakes, pumpkin, river snails, duck, and hairy crabs. Each of them has a symbolic meaning.

Mooncake remains the most popular and important food eaten during Mid-Autumn Festival. Its round shape, like the full moon, symbolizes family reunion. On the night of the festival, all families share mooncakes when they admire the moon.

Mooncakes used to be made at home, but very few people make them at home nowadays. They are only manufactured and available in bulk around this time of year, so don’t miss this once-a-year treat.

Each region has its own version with different types of crusts and fillings. Get to know more about Mooncakes — Symbols, Flavors, Regional Varieties, and How to Eat Mooncakes.

Many places in China have the custom of eating duck during the Mid-Autumn festival. It is not only because of the health benefits of duck but also an old folk tale.

In the middle of the 14th century, the Han people decided to fight against the brutal Mongolians who were called Dazi (鞑子 Dázǐ), which sounds like ‘duck’ (鸭子 yāzǐ) in a local Northern dialect. So, ‘eat ducks’ was a code phrase used for a secret mission against the Mongolian Yuan Dynasty that happened to occur at Mid-Autumn Festival 1368, when the Yuan were overthrown.

Since then, eating duck at Mid-Autumn Festival has become a custom in many places. Popular duck dishes are braised duck with taro, sour plum duck, and roasted braised duck.

Fall is the best time to eat hairy crabs. So, it is a special seasonal delicacy for the Mid-Autumn festival, a highlight of Mid-Autumn Festival reunion dinners, especially around Shanghai.

‘Taro’ in a local southern dialect sounds like ‘the coming of good fortune’. Eating taro during Mid-Autumn Festival is believed to dispel bad luck and bring good luck and wealth. The tradition began during the Qing Dynasty (1644–1911).

Lotus root is an auspicious food due to its name and texture. Its Chinese name, 莲藕, means ‘togetherness’ (连 lián) and a ‘pair’ (偶ǒu). Its delicate fibrous threads symbolize the strong bonds of families.

It can be deep-fried, stir-fried, or stuffed with meats in two slices like a sandwich.

The tradition of eating pumpkins during the festival is followed by people living in the ‘South of the Yangtze River’ area. Why eat pumpkins at Mid-Autumn Festival? The origin isn’t exactly clear…

Some believe that it was due to poor families making do with pumpkin (cakes) during Mid-Autumn Festival in ancient times, as they couldn't afford mooncakes. Others believed that eating pumpkin can bring good health, which is related to a legend:

An interesting legend has it that an old couple were seriously sick for lack of food. One day their daughter brought a pumpkin home and cooked it to serve to her dying parents. Surprisingly, her sick parents recovered after eating it.

River snails are usually cooked with medicinal herbs to dispel their unpleasant odor.

8. Osmanthus Wine — For a Happy Life

Drinking wine fermented with osmanthus flowers has a long history in China. Chinese people began to drink such wine over 2,000 years ago. This wine may be a tradition because the Mid-Autumn festival occurs when osmanthus flowers are in full bloom. Drinking the wine signifies family reunions and happy life.

10. Pomegranates — A Symbol of Fertility

Fall is the season for pomegranates. This beautiful red fruit with hundreds of seeds inside is a symbol of fertility and abundance in Chinese culture. Eating pomegranates at the mooncake festival is believed to attract luck and fertility for the family.

Just like pomegranates, watermelons are essential for Mid-Autumn due to their seeds, which symbolize fertility, and their round shape, representing a family’s reunion.

‘Pear’ (梨 lí) is a homophone for ‘separate’ (离 lí) in Chinese. It is usually considered an unlucky food, and Chinese people avoid eating it during festivals, except for at Mid-Autumn Festival. Eating pears at that festival means to ‘eat off the separation’, invoking a forever reunion.