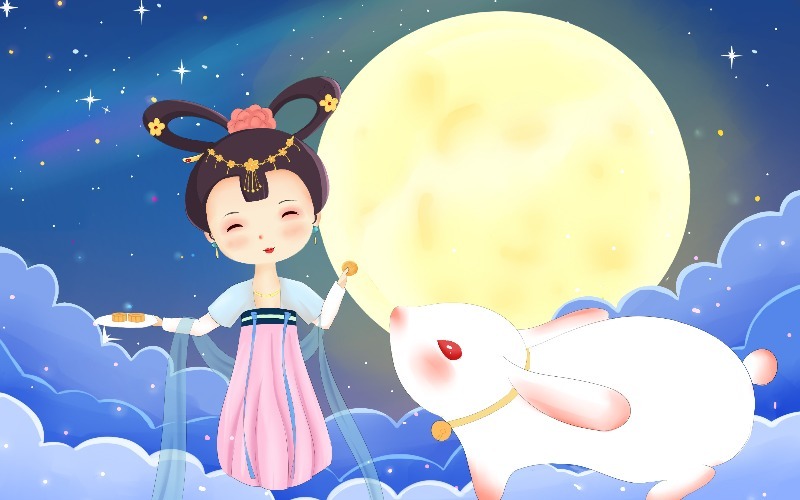 The Story of Chang’e and Houyi

How did Chang’e rise up and land on the Moon? What’s the story of Chang’e, Hou Yi, and Mid-Autumn Festival? There are different versions of the legend. Here are two popular ones:

Chang'e and Houyi the Archer (Version 1)

Legend has it that Chang’e was a beautiful and kind woman, and her husband Hou Yi (后羿, Hòu Yì /ho ee/) was a brilliant archer.

During a time, thousands of years ago, when there were 10 suns, the Earth could not endure the smoldering heat. To save the earth, 'Lord Archer' Hou Yi shot down nine of the 10 suns, leaving behind just one.

Hou Yi was respected as the Earth’s hero and received an elixir of immortality from the Queen Mother of the West as a reward for saving the Earth and its people.

However, the elixir was only enough for one person, and Hou Yi didn’t want to gain immortality without his beloved wife. So, he did not consume it straight away, but let Chang'e keep it with her.

But one day, one of Hou Yi’s students named Pang Meng tried to steal the elixir when Hou Yi wasn’t home. In order to protect the elixir from the evil person, Chang’e drank the elixir of immortality. Then she flew to the moon and became the Moon Godness, leaving her husband behind.

Hou Yi was heartbroken when he was told what had happened to Chang'e. He shouted to the sky and surprisingly discovered the moon was extremely bright that night. He caught sight of a swaying figure that was exactly like Chang'e. Then he displayed the fruits and cakes that Chang'e had enjoyed to convey to Chang’e that he missed her.

Moved by their true love, the Mother of the Moon allowed Chang'e to reunite with Hou Yi every year on the full moon of the eighth lunar month.

Since then, on lunar month 8 day 15 every year, which has become Mid-Autumn Festival, people look forward to their reunion (and their own family reunions). Worshipping the moon and eating mooncakes have become traditions of Mid-Autumn Festival.

Chang'e and Houyi the Archer (Version 2)

In another popular version of the legend, Chang'e and her husband Hou Yi were immortals living in heaven.

One day, the ten sons of the Jade Emperor transformed into ten suns, causing the earth to scorch.

The Jade Emperor asked Hou Yi to stop his 10 sons ruining the earth. So, Hou Yi shot down nine of the sons, leaving just one. The Jade Emperor was so sad and angry at his nine sons’ deaths that he punished Hou Yi and Chang’e by making them live as mere mortals on earth.

Distressed by his wife's grief over becoming an ordinary mortal, Hou Yi journeyed to meet the Queen Mother of the West and requested a vial of her elixir. The Queen Mother warned Hou Yi that the elixir must be shared between him and his wife or else they would not become immortal together.

Upon arriving home, Hou Yi stored the vial in a case and warned Chang'e not to open the case, before going off on urgent business. Unable to wait for her return to heaven, Chang’e swallowed the entire vial of elixir. Because of the overdose, Chang'e kept on floating until she landed on the moon, instead of just floating up to heaven in the clouds.

Get to know more stories about Mid-Autumn Festival including the Jade Rabbit.