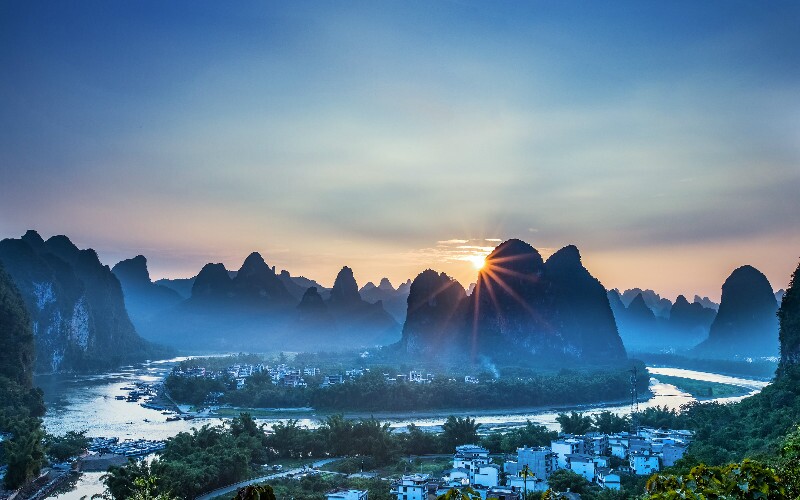 Guangxi Travel Guide - How to Plan a Trip to Guangxi

With a total area of about 230,000 square kilometers (89,000 square miles), Guangxi is blessed with great topography. Limestone covers half of its total area. With its subtropical climate, Guangxi is suitable for people to travel any time of the year. See Guilin Weather, Nanning Weather and Beihai Weather.

Coastal Landscapes in the South

Guangxi has the ocean to the south, and the most famous Guangxi seaside destinations are located on the Gulf of Tonkin (the Beibu Gulf), such as Beihai, Qinzhou and Fangchenggang.

Things like plenty of sunshine, blue sea and beautiful islands are what we hope for from coastal holiday areas, and Guangxi won't disappoint. With Beihai City being on an estuary of the Beibu Gulf, Guangxi provides tourists with wonderful marine ecology and exploration opportunities, coral, seaside culture, marine sports and island cruises.

Having a moderate climate, the coastal cities are best for travelers in Guangxi any time of the year, especially during the period from November to February, when the weather in the north approaches freezing.

Karst Landscapes in the North

High above sea level, Northern Guangxi features karst topography, notably numerous mesas, sheer white cliffs and grottoes. Guilin is the representative city of North Guangxi, and is a popular tourist city for people from all over the world.

The picturesque karst landscapes along the Li River down from Guilin to Yangshuo are the best, and a cruise on the Li River is an unforgettable experience. Other karst attractions include Reed Flute Cave, Crown Cave, Elephant Truck Hill, Moon Hill and many many more weird and wonderful caves and hills.

Yangshuo Town has the largest density of expats in Guilin. Its idyllic location on the Li River and its holiday atmosphere are a great attraction. West Street is famous for its density of Western tourists.

With a total population of 50 million, Guangxi is multiracial province which is home to 18 million minority citizens, and the Zhuang Minority is the largest minority in China. Other minority groups include Yao, Miao, Tong, Maonan, Yi and Shui. Different minorities have different cultures, and to explore the unique characteristics of each minority group will surely bring you unexpectedly pleasant surprises.

Located between the tropical and subtropical regions, Guangxi has different weather in different cities. Generally speaking, Guangxi has hot and humid summers with lots of rain. The average July temperature is 29 °C (84 °F). Winter is mild and short with an average temperature of 12 °C (53 °F).

Spring, summer and autumn in Guangxi are characterized by plenty of sunshine, moderately high temperature and abundant rainfall, during when Guangxi is best for tourists in almost all the cities.

The best time to visit Guilin is the period from April to August, when the temperature is mild and rainfall is appropriate, and the Li River enjoys the most wonderful look during that time. When winter comes, Guilin becomes cold, yet tourists can still travel to Beihai, the city located within the tropical region, to enjoy a warm winter there.

Day 1: Arrive in Guilin, check in to a hotel, and have something to eat. If there is enough time, visit Seven Star Park. Stay in a local hotel for the night.

Day 2: Get up early to join a Li River Cruise bound for Yangshuo, and to enjoy the wonderful scenery along the river, including the most famous Elephant Trunk Hill. In Yangshuo, you can visit old-style villages, such as Fuli Village, and it is a good choice to rent a bicycle and hike up Moon Hill. Stay in Yangshuo for the night.

Day 3: Back to Guilin City in the morning. Visit the Reed Flute Cave and Brocade Hill that afternoon. Take a train to Nanning in the evening, and stay in a local hotel in Nanning.

Day 4: Visit Guangxi Provincial Museum in the morning. In the afternoon, go to Yiling Cave. Return to Nanning and spend one hour strolling in Bailong Park, Renmin Park or Nanhu Park. Stay a second night in Nanning.

Day 5: In the morning, take a coach to Detian Waterfall. In the afternoon, take a bus to the coastal city of Beihai. Spend nightfall there to watch the beautiful sunset on Silver Beach, and then find a sea-food restaurant to try some tasty seafood in Beihai. Stay in Beihai overnight.

Day 6: Take a tour to Weizhou Island for a half day or more, if you like.

If you like this itinerary send us a message to make an inquiry or see other classic tours that include Guangxi – search using Guilin or another city name.