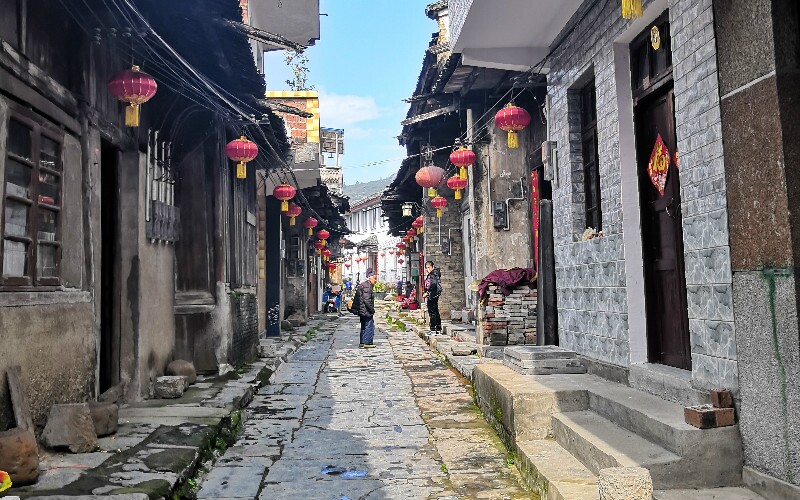 Planning to visit China? Love exploring historical sites and off the beaten track places? Why not visit the well preserved, ancient village of Daxu for a great example of traditional Chinese architecture and culture?

Top Things to See and Do

Located approximately 20 kilometers southeast of Guilin, near the bank of the Li River, Daxu is noted for its well preserved ancient buildings, worn bluestone streets and traditional culture.

Though a quaint, off the beaten path village, Daxu offers many interesting sites to be explored. From ancient temples to stone streets to a historic market, Daxu is a paradise for lovers of history and antiquities.

The old street in Daxu

Probably the most popular attraction in Daxu is its ancient street. Stretching about 2.5 kilometers in length, the street is noted for its bluestone pavement made smooth from a thousand years worth of carts, shoes and weather.

Regarded for its well preserved architecture, the Daxu village features many significant buildings constructed during the Ming and Qing Dynasties from wood and stone and decorated with beautiful carvings.

Some of these historical structures include the Hanhuang Temple and the Gaozu Temple that are well worth a visit. The Longevity Temple is an attractive site featuring a stone turtle and two pillars with huge dragon carvings at its entrance.

A must see is the beautiful Wanshou Bridge, or Longevity Bridge. Constructed during the Ming Dynasty between 1368 and 1644, the bridge is a charming stone arch from where visitors can see the scenic views of the Li River, Millstone Hill and Snail Hill.

The thirteen docks still surviving from the prosperous trade business of the Ming Dynasty are another interesting attraction. Some of these docks remain in use and serve as the object of many visitors' photographs.

Discovered as late as the 1990's, these seven tombs were found to be mysteriously arranged to coincide with the pattern of the Big Dipper constellation. Many interesting burial artifacts were excavated from the tombs.

Formerly one of the most important markets in the area during the Ming Dynasty, the market in Daxu still thrives even if smaller today.

Visitors can enjoy browsing stalls that sell a variety of goods from traditional handicrafts like straw sandals and accessories to ceramics and souvenirs as well as Chinese medicines, foods and delicacies like quail eggs, fruit and dumpling snacks.

See the traditional Chinese architecture at Daxu Old Town, and pick juicy strawberries on a farm nearby. You can stroll along country roads lined with beautiful farms and experience the Chinese rural lifestyle. Enjoy this fun activity and your juicy strawberries.

The history of Daxu dates back to over 2,000 years ago when it was founded during the era of the Qin Dynasty that ruled in China between the years of 221 and 207 BC. Centuries later during the Ming Dynasty, Daxu thrived as a leading trade and commercial hub due to its close proximity to the Li River. The thirteen docks that can still be seen in Daxu today are the remnants of this former golden age.

As industry, technology and tourism grew and spread elsewhere in China over the next several hundred years, the ancient village of Daxu somehow managed to make time stand still and has maintained its antique architecture and traditional way of life.

Follow a local expert who grew up in this ancient town to discover more hidden gems of the town. He can lead you to knock on the door of the older generation, to discover something more about the history of Daxu.

You will then have a chance to visit a local crafts workshop and see how local people make Chinese lanterns, paint the monkey mask or lion head. And also you will hear from local family about their life and work.

Here is a sample itinerary for your reference: