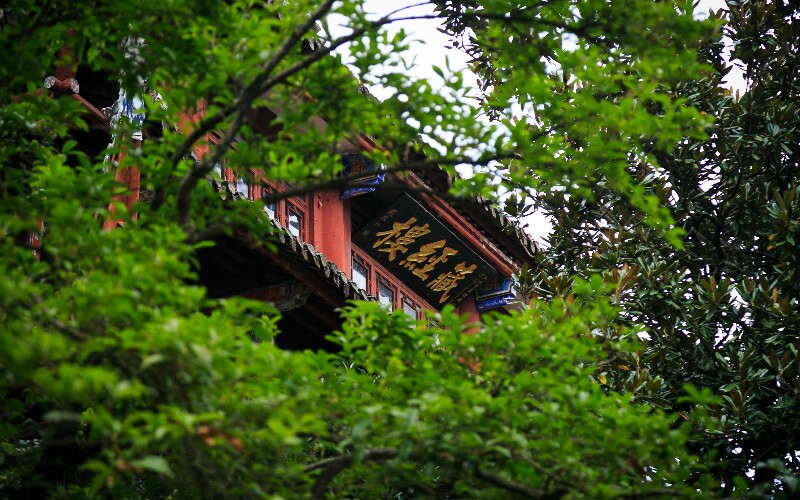 Qianling Park is named after Qianling Mountain, the most prestigious mountain in southern Guizhou Province. The park is home to green mountains, clear water, tranquil forests and old temples.

Qianling Mountain is lush with over a thousand kinds of tree and flower, and a thousand kinds of herb. Flocks of birds occasionally stop by. Streams gurgle down into a valley. On top of the mountain, there is a pavilion with a panoramic view over the whole city.

There is a 'holy fountain' originating in the mountain, with water so clean that local people regard it as coming from heaven. The water actually comes from rocks half-way up the mountain and makes its way down to a fountain in Shanqiao village, 600 meters southwest of Qianling Lake.

The streams from the fountain source and the mist surrounding the forest make this one of the best scenic spots in Guiyang.

Qianling Lake lies like a green pearl at the foot of the mountain. Among the trees at the lake's edge stands a memorial to martyrs who died during the war of liberation of Guizhou. The trees and pavilions clustered round the lake create a peaceful and dignified atmosphere for visitors.

Forget about peace and dignity if you walk up 'Macaque Avenue' with a banana in your hand. It won't be long before your peace is disturbed, your dignity ruffled and your banana burgled.

More than 500 macaques (a variety of monkey found chiefly in Asia), energetic and unnerving, gregarious and greedy, live at liberty on the mountain. It's an interesting adventure to amble up 'their' hill en route to the zoo.

Yes, there's even a 'zoo'; a big word for a relatively small collection of animals. Some visitors may be dismayed at the zoo conditions, but children will enjoy a visit regardless.

Hongfu Temple is located below 'Macaque Avenue'. First built in 1672, it's one of the most famous Buddhist temples in Guizhou.

Up in the sharp cliffs on the way to the temple, stone inscriptions can be seen here and there. Among them, the most notable is the 6.2-meter-high and 3.7-meter-wide Chinese character for 'tiger', sculpted by Zhao Dechang in the year 1860.

Kylin Cave is also part-way up the mountain. In December 1936, generals Zhang Xueliang and Yang Hucheng kidnapped Nationalist commander Chiang Kai-shek in Xi'an and forced him to unite with Chinese communists to oppose the Japanese invasion. This was a key turning point in communist fortunes in China.

Later, during the War of Resistance against Japan, Zhang Xueliang and Yang Hucheng were in turn captured by Chiang Kai-shek at Kylin Cave and imprisoned there for a while.

We provide one of the best tailor-made tour services in China and can include Qianling Park and any other attractions you want to see in your Guizhou tour.

With our expert and experienced tour guides and comfortable private transport, all you need to do is enjoy the tour!