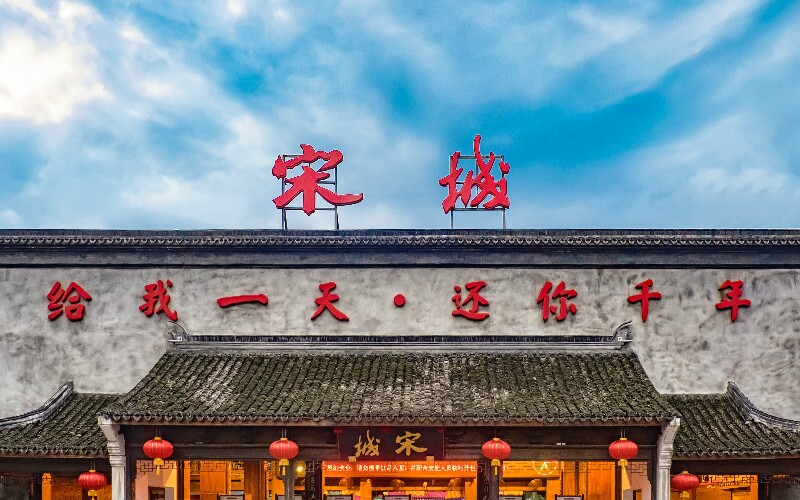 It comprises three areas: the Culture Performance Area, the Hi-Tech Experience Area, and the Recreational Area.

The Culture Performance Area includes some theaters, streets, Buddha caves, and some shops where you can learn about what Hangzhou was like in the Southern Song Dynasty. The Hi-Tech Experience Area provides many special experiences. The Recreational Area has many recreational programs for children.

The Song River flows through the town. The 1 kilometer (0.6 mile) long Song River is suitable for boating. Its banks are lined with archaistic hostels, pavilions, pagodas, bars, and teahouses, and it’s more beautiful during the night.

The attractive performances in theaters, squares, and old streets are the highlights in the area.

With a 26-meter (85 feet) tall mountain as its background, Culture Street is where large-scale celebratory activities, such as the Torch Festival and the Water-Splashing Festival, are held. As the fire on the mountain is lit during festivals, the locals bow to it to pray for happiness and peace.

As the most magnificent square in Song Dynasty Town, Rostrum Square is a wonderful place for visitors to experience the lifestyle of the Song Dynasty, where you can dress in typical Song-style clothes and even an emperor’s robe.

Shijing Street is lined with stores, pavilions, terraces, and towers. Many performances, such as throwing an embroidered ball to choose a husband, and puppet shows are available.

Fairy Hill and Buddha Caves: Hangzhou was once the Buddhist center of the Northern Song Dynasty, during which a number of Buddhist temples were built successively. You can explore Buddhist caves, see a statue of Sakyamuni, and visit the Temple of the God of Wealth, the Memorial Hall of the Matchmaker, and the Kwan Yin Pavilion.

This area offers recreational programs with hi-tech features, such as the Live Riverside Scene of Pure Brightness, Frightening Spooky House, the Phantom of the Jungle, the Song Residence, and Cricket Fighting.

Hangzhou in the Song Dynasty

Meijiawu Tea Plantation is about 4.5 kilometers (2.8 miles) away, which is 10 minutes’ drive from Song Dynasty Town. Meijiawu is a good place to experience Chinese tea culture.

West Lake is the highlight in Hangzhou. It is about 24 minutes’ drive from Song Dynasty Town.

Tour Song Dynasty Town with Us See what Hangzhou was like during the Southern Song Dynasty.

Explore Song Dynasty Town with us, and your local guide will be happy to share the history and stories of the Song Dynasty with you. We will arrange your accommodation, transportation, and anything else according to your requirements. Feel free to make an inquiry and tailor-make your hassle-free tour with us.