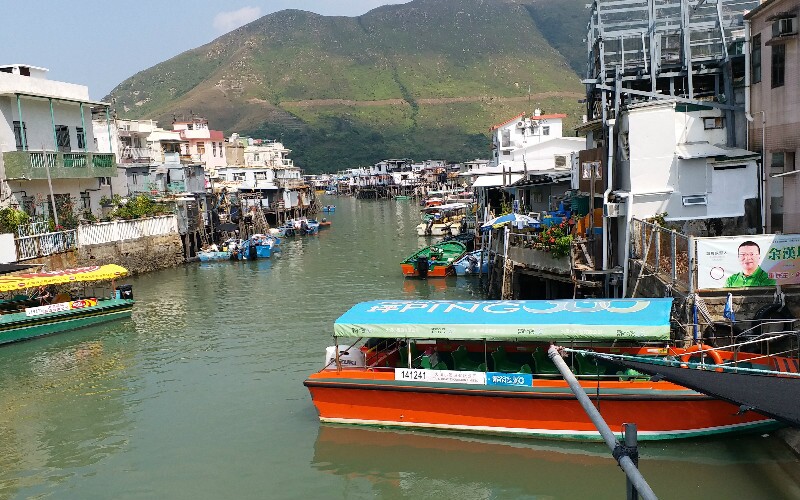 Discover the History of Hong Kong in a Day

Seeing more of the history of Hong Kong isn't that difficult if you are willing to spend a bit more time on research. Here is a suggested itinerary of a one day journey for discovering the local history.

Tai O fishing village is probably the most unique attraction in Hong Kong. It was first developed as a fishing harbour and a saltern (an area where salt was made) by the Tanka people, a group of folk fishermen living in Hong Kong for centuries.

Nowadays, the fishermen are still living in their squatter huts and stilt houses on the water. These historic dwellings create a special landscape, attracting local people and tourists to come and see. Walking around the huts gives a better understanding on how the fishermen live, such as how they make fish nets and catch fish. You can also take a boat trip along the river to get a different perspective on the traditional living environment of the boat dwellers.

There is a main street called Tai O Market Street. Many different kinds of seafood and seafood products can be found. The most famous is salted fish. In the past, lots of fish could not be sold at once, therefore fishermen used salt to preserve the remaining fish, and this gradually became a special fish product in Tai O. They put the salted fishes in the sun for five to six days. There are also lots of shrimp pastes displayed on bamboo baskets as they are sun-dried.

In Tai O there are a few temples with a rich history. Yeung Hau Temple is the most famous one.

Yeung Hau was a great general in the Southern Song Dynasty who led refugees to Lantau Island, and he finally died there. In the mind of Tai O fishermen, he became a god to protect them from all kinds of calamities and bless a good harvest for them. As a result, the fishermen in Tai O highly respect Yeung Hau. Therefore the mighty bell, the whale bone, and the old dragon boat inside the temple are dedicated to him for his gracefulness. After visiting these old temples, you can know a bit more about the history and culture of the local religion and the relationship between the fishermen and these deities. Dr. Sun once mentioned that Hong Kong provided him his revolutionary ideas. Walking through this historical trail will definitely let you know not only the history of Dr. Sun in Hong Kong but also how much Hong Kong contributed to the 1911 Revolution.

Dr. Sun Yat-sen was a significant person in Chinese history. He was the leader in the 1911 revolution against the Qing Dynasty and then founded the Republic of China (1912–1949). People respected Dr. Sun as “Father of the Nation”. Sun Yat-sen Historical Trail was established in 1996 for the celebration of the 130th birthday anniversary of Dr. Sun.

There are total 15 locations that are related to the life of Dr. Sun and the revolutions. It needs around two hours to finish walking the whole trail. Also visit Hong Kong's Sun Yat-sen Museum for an overview of the like of "China's father". Man Mo temple was one of the oldest temples dedicated to the God of the Literature (Man) and the God of the Military (Mo), built in 1847 by the Chinese businessmen. They were prayed to by students in the past for having good results in the Civil Examination. Nowadays, during important festivals such as the Chinese Lunar New Year, many parents bring their children to pray for good studies.

Before the opening for trade, most Chinese people lived in today’s Central and Sheung Wan areas, and the temple became a meeting place for the business conferences.

In the past, Chinese people believed that gods or the deities had undisputed power . Therefore whenever they had any affairs to discuss or arguments among the Chinese community, they would come to the temple and get them solved by the Chinese gods. In their mind, if someone was being dishonest in front of the gods, he or she would be punished by the deities so arguments could be solved justly there. At that time, those who where involved in a dispute would cut the head off a chicken and burn a yellow paper to make a vow to the gods. This kind of practice was admitted by the government and was legitimate. Therefore, Man Mo Temple can be considered as an old court for the Chinese people. At night, go to Temple Street Night Market. It was named after Tin Hau Temple next to the middle playground. In 1975, The Hong Kong Urban Council marked off an area for the hawkers to sell.

It was mainly a local street that people went to after work for entertainment, but now it has turned into a popular tourist spot. Though it is commercialised, you can still find many old-time features, including fortune-telling, Chinese opera street performance, cabarets, mah-jong shops, and pawnshops. Many stalls sell special souvenirs such as cheongsams, Chinese oil paintings, and handcrafts.

Temple Street Night Market shows the grassroots culture of the local people. It is a collective memory for Hong Kong people because it is where Hong Kong people spend much time with their families.

Dondi miss the chance to try the local food in the traditional food stalls (Tai Pai Dong). It is a kind of old restaurant where people sit around a round table outdoors. Nowadays, there are not many Tai Pai Dong left, so having a dinner in the night market is a special way to experience the local food culture.

Contact us to create a tailored tour, or read more about our popular products: