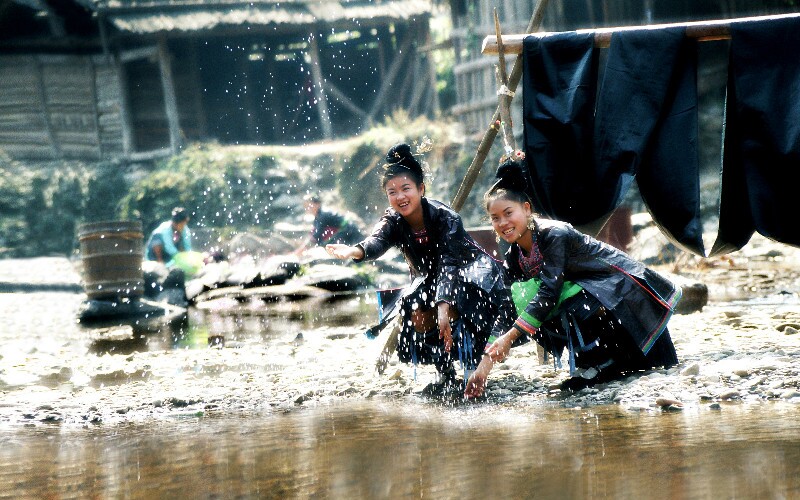 Yintan is one of the best-known Dong villages in Guizhou Province, south-central China. The traditional Dong customs that have endured for many centuries, the unique village-center drum tower, and the various annual festivals, bring many tourists to this secluded little village. The beauty of majestic mountain heights and thick yew tree forests is yet another attraction maintaining Yintan's popularity among travelers.

Yintan is surrounded by mountains on three sides and approached by a path on the fourth. A river runs through the village, winding around ancient trees and wooden houses that stand on stilts. Such houses are scattered along the sides of the hills and rise into the green leaves of the trees. All in all, it's an impressive and picturesque sight that one is sure to remember for years to come. Villagers carry on ancient cloth-weaving and fabric-dyeing skills passed down to them from their ancestors. Almost every house has an indigo-dyeing barrel, and covering almost every back are clothes manufactured from first to last by local women themselves.

Visitors are welcomed with a traditional ceremony for honoring guests and numerous local festivals offer a glimpse into Dong ethnic lifestyle. Dong New Year (in mid January) and the Guzang Festival, during which thanks are given for a plentiful harvest and Dong religious practices are followed, are two of the most important festivals. Singing, playing the lusheng (local bamboo musical instrument), dancing, daily wearing of ethnic-style clothing, and dining on traditional foods all contribute to the cultural life in Yintan. The drum tower is the main architectural feature of nearby Zengchong village; it's the oldest drum tower in China. Its 13 hexagonal-shaped stories and frontal gate structure hold special symbolic value for the Dong. Near this tower, villagers gather to greet guests, pray to ancestors, discuss village matters, and perform various ceremonies.

How to Get There and When to Go

Yintan village is 252 km (157 miles) south of Kaili and 20 km (12 miles) north of Congjiang. The best way to travel is by bus from Kaili to Congjiang and then a second bus from Congjiang to the village.

The climate is relatively mild all year long, but the monsoon rains fall between April and June, December through February is relatively chilly, and June and July are usually hot and humid. Thus spring and fall are the best times to visit, as far as weather is concerned. You may, however, wish to visit in February to experience the Early Festival convened in Kaili; with bullfighting, horse racing, ethnic musical performances, and much more besides.

What Else Is There to Do in the Area? The dong people are celebrating the Dong New Year.

Consider stopping at Caohai Lake to view the many wetland birds that retreat there; seeing some of the numerous Dong-built covered bridges in the province known as "wind-and-rain bridges"; and checking out the ancient ruins of Kongmingtang.

A Final Word to Tourists

Guizhou Province is home to a great number and variety of ethnic minorities, including the Dong people. There is much to be gained from learning about the culture of other nationalities, which often differs substantially from what we are most accustomed to. It is good for every tourist to be a cross-cultural learner, as well as simply to enjoy the many new things he or she encounters, while on a journey to a far-away land.

kaili Kaili Travel Guide - How to Plan a Trip to Kaili