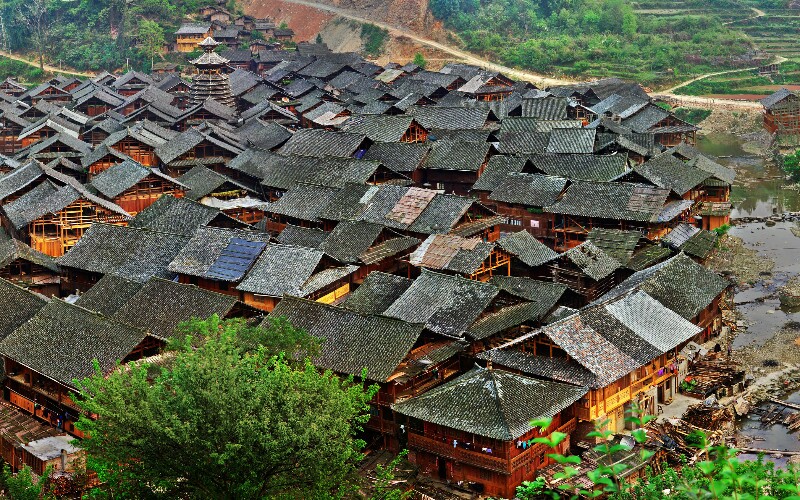 Design of the Tower

Zengchong drum tower was built in the most common style for such towers, featuring a beautiful octagonal pagoda.

Legend goes that it was built in homage to the 'cedar king'. The outline of the tower does indeed resemble a cedar tree.

In fact, the tower is built entirely of China fir and like most Dong architecture, holds together via mortise and tenon, without a single nail.

Eaves are painted with colorful pictures of dragons, phoenixes, fish and shrimps. Underneath are intricate sculptures.

The interior of the tower features four large pillars, with benches between the pillars surrounding a central fire place.

Meetings at the Tower

Most community events in the village of Zengchong take place at the tower, whether musical festivals or village gatherings to discuss important issues. In the past, elders would convene meetings here to settle disputes.

The tower is also used as a place of worship for Dong people. During worship celebrations, often at New Year, villagers tie a straw knot and hang it at the village entrance, to indicate admission is open to residents only.

Hanging high in the rafters of the 25-meter-tall tower is a great drum, 3 meters long and 50 cm in diameter. The drum can serve either to welcome or warn the villagers.

Like almost everyone in Zengchong, Shi has lived his entire life here and is a member of the Dong ethnic minority. He was a child when he learned what various drumbeats signified. "Three repeated beats - ba-bump, ba-bump, ba-bump - that's when we gather to sing," he said. "Six beats - ta-ta-ta-ta-ta-ta - that means an enemy is coming."

The village is unusual among Dong villages for its cobbled lanes, ponds dotted around for fire-prevention, and its couple of very old stone houses.

There are no fast-food restaurants, no mini-marts, not even a traffic light; the village feels like it has one foot in the 17th century. Men still drive donkey carts through the cobblestone streets while women arrive from the nearby green hills hauling bundles of kindling on their backs.

Small signs of modernity are already evident. Nowadays, satellite dishes sprout from the roofs of weather-beaten huts, delivering programs such as "The Voice of China" to flat-screen TVs inside. Toddlers drive battery-powered toy cars through the narrow streets.

But the sightseer trade has yet to arrive with any gusto. There are no souvenir shops in Zengchong, no hawkers pushing postcards or T-shirts or factory-made "ethnic clothes."

Like all other Dong villages, however, Zengchong is undergoing a massive overhaul of material and spiritual culture. It'd be interesting to observe the current blend of old and new in the village. The old may not last many more generations.

Zengchong drum tower is open all day, except during worship services. There is a small admission charge to the tower.

The most convenient way to reach Zengchong is to take a fast train from Guilin or Guiyang and stop at Congjiang, then hire a taxi to the village. The taxi would take about two hours each way and cost around 400 or 500 yuan for the day.

You can ask to add a visit to Zengchong Drum Tower to one of our existing Guizhou tours. Alternatively we can tailor-make a day-trip for you from Guiyang or Guilin.