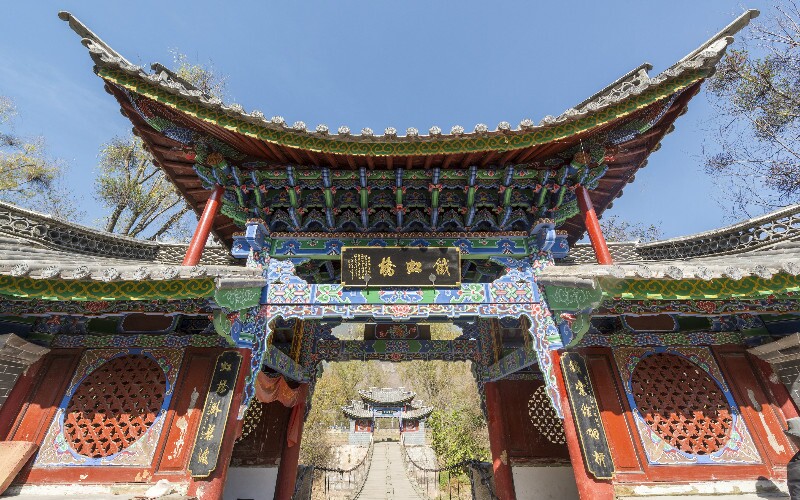 At the base of the mountain flanking the First Bay of the Yangtze, stands a small town called Stone Drum Town. This town derives its name from a white marble carved monument in the shape of a drum, (diameter 15 m, thickness 0.7 m). This monument memorializes the victory and subsequent spread of power of Baizhuang, the Tusi of Mu Family of Lijiang, during the Jiajing years of the Ming Dynasty. This historically relevant stone monument was erected during one of the earliest periods in Lijiang.

To the right of the monument is a lovely willow forest at its bank; while on the left flows the Chongjiang River. Spanning this river is the 17m long Tiehong Bridge, constructed of boards paved over iron chains, and with similar iron chains serving as fences on both sides. Stone Drum Town is a historically important town on the ancient trade route for tea and horses between inland provinces and Tibet. The town still features a flourishing trade fair, currently held every three days.

Stone Drum Town is a bustling ethnic community, with Naxi, Zang, Bai, Yi, Miao, and Hui people all inhabiting the town. The Naxi are the main minority group, and their unique culture is well represented through their traditional lifestyle and centuries-old fashion of dressing. The women in Stone Drum Town do a special style of make-up. They usually wear blue hats and long gowns with white ribbons binding their waists.  Moreover, traces of the town's glorious past as a vibrant trade bazaar are everywhere. The natural scenery is also stunning and vibrant, especially around the First Bend of the Yangtze River, and the scenery of the Jinshajiang River. The town has the premiere vantage point to view the First Bend of the Yangtze River.

For centuries, the Stone Drum Town had been a coveted locale for ambitious politicians and statesmen. According to historical documents, during the Three Kingdoms Period, the brilliant strategist of Shu State, Zhugeliang, led his troop across the Jinshajiang River to the town after he had conquered the Nanzhong. A famous Sui general -Shi Wansui, then established a fortress here when he was ordered to subdue today's Yunnan region. These ancient records add a sense of culture to this tranquil town, and evoke a feeling of its rich historical past.

The First Bend of the Yangtze River: Rushing southwards from the Qinghai-Tibet Plateau, the Yangtze is blocked by the Hailuo Cliff at Stone Drum Town, which makes it turn roughly to the northeast, forming an unusual river bay in a "V" shape.

Iron rainbow Bridge: This iron chain bridge was constructed during the Qing Dynasty. The bridge takes the shape of a rainbow stretching over the waves below, thus giving it the distinctive name.  A 17 meters-long iron chain was used to form the base, with wooden planks paved above. Iron chains were also applied to create the guardrails.

Stone Drum Town Culture Hall: It is housed in a flowers- dotted garden. The historical staff of the Red Army arduously crossing the Yangtze River is depicted here. Another site of note is the Stone Drum Tablet, from which the name of the tower is derived.

Stone Drum Town Primary School: The school itself is not intrinsically interesting, but it is the best place to view the town and the surrounding areas due to its elevation.

Generally speaking, the area is undeveloped and as a result, the choices for lodging are quite rudimentary. Most travelers choose to stay in hotels in nearby Lijiang or Dali.

Note: Although a trip on your own from either Lijiang or Tiger Leaping Gorge to the Stone Drum Town is certainly possible; it's considered safer, more reliable and much more hassle-free if arranged through a travel agency.