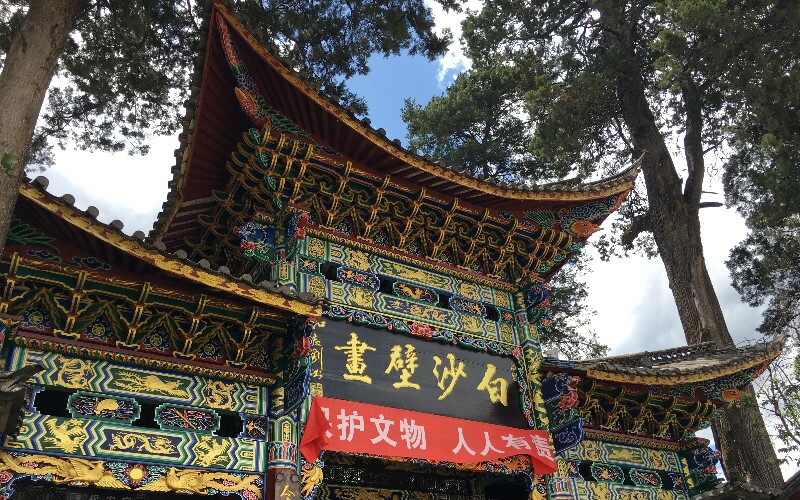 The Mural in Baisha Village

Baisha Old Town is one of the oldest towns in Lijiang. It is the earliest settlement of the Naxi people and is the birthplace of "Tusi", chief of the Mu clan. In the town there are many ancient buildings built during the Ming Dynasty, including Dabaoji Palace, Liuli Temple, and Wenchang Palace. The well-known Baisha Frescoes are located in Dabaoji Palace. Because of the white sand on the ground, the town was named "Baisha", which means "white sand". In the Naxi language, it is called "bengshi". The architectural complex is made up of two parts, folk residence and cultural sites. The folk residence is called "pengshizhi" which in the local language means "Baisha Streets". The streets all go from south to north. In the center of the old town there is a square where three thoroughfares intersect. Houses and small stores stand on the both sides of these streets. A crystal clear stream winds around all the houses flowing through the small town from north to south. Baisha Old Town is the cradle of the Mu clan. There the Mu family became experienced in city planning.  Early in the Tang Dynasty when the king of Nanzhao State named the Yulong Snow Mountain North-Yue, the ancestors of Mu clan began to build Baisha Streets and North-Yue Temple in Baisha Old Town. In the Song Dynasty the prosperous little town became the economic, political and cultural center of Lijiang. In the Ming and Qing Dynasties the Mu family gradually moved to Dayan town.  The central district of the town is characterized by temple groups called "Mudu" and a big square symbolizes the political rights of the Mu family. Among the surviving ancient architectural groups, the Fuguo Temple, Dabaoji Palace, Liuli Palace, and Dading Pavilion were built during the reign of Tusi. During this time, the Mu people began to channel water from Yulong Snow Mountain into the town. At the end of Baisha Old Street, there is a huge group of temples built during the Yongle Period, in the Ming Dynasty. It consists of three yards including the gate of the temples, the dooryard, Sutra Collection Pavilion, the cloister, Liuli Temple, and Dabaoji Palace. Dabaoji Palace is the backyard. The total area of the palace is about 73 square meters. There are 28 fresco groups located in the palace. Among these frescos the painting about Sakyamuni explaining the sutra passages to his disciples is the most famous one. These mural paintings, with their fine and smooth lines, bright colors, vivid pattern, balanced and harmonious composition are a wonderful display of more than 100 figures depicting religious tales and activities from Taoism, Buddhism, and Tibetan Buddhism. These frescoes are not only treasures of the history of Chinese painting, but also important cultural relics as well. The fresco group is a collaboration of artists from Han and Tibet nationalities. They represent superb artistic skills, as seen by the flowing lines and well-defined colors. They are a rare treasure. Dading Pavilion, dating back to Wanli period, the Ming Dynasty (1572 AD) is about 10 meters away from Dabaoji Palace. The 16 mural paintings preserved in Dading Pavilion were finished in the Qing Dynasty. Different from those in Dabaoji Palace, the beautiful shapes, in bright colors and precise lines form a sharp contrast. They too are a national treasure.

The 44 pieces of Baisha frescos were drawn in the early Ming Dynasty. Most of the paintings are about religious stories of Taoism, Buddhism, and Tibetan Buddhism. The murals embodies the artistic characteristics of the Naxi, Tibetan, Han and Bai ethnic groups. Among them the paintings about Kwan-yin and Sakyamuni are the most famous ones. Now Baisha Frescos, also known as Lijing Frescos have become precious data for the study of China's history of arts and religions.