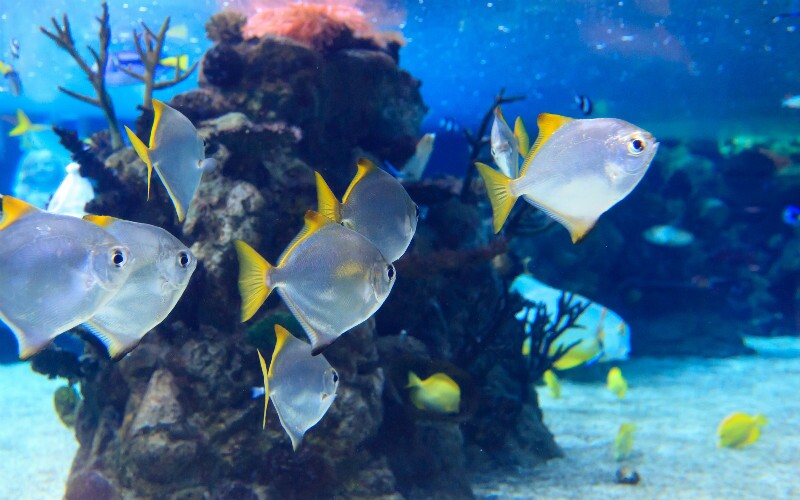 The Macau Marine Museum has an aquarium, exhibition halls, a tea cafe, and a library with books and journals. Commander António Martins Soares, the Macau Harbor Master, proposed the museum in 1986. The museum was opened in an old house at the Largo do Pagode da Barra in 1987. Because more space was needed, a new building was built near the old house, and it opened in 1990. The new museum building is next to the Temple of A-ma. If you are interested in the maritime history of Macau or in ancient Chinese ship construction methods and overseas exploration, the Macau Maritime Museum is a place to visit.The building has four main theme halls: the Maritime Ethnology Exhibition, the Maritime History Exhibition, the Maritime Technology Exhibition, and the Aquarium Gallery.

The Maritime Ethnology Exhibition is below ground. This area is for instructing about the traditions and techniques of Macau fishermen. The exhibits have models of fishing vessels, demonstrate various fishing techniques, instruct on the customs and religions of the people, and display fishing implements. Videos show fishermen at work and their fishing techniques. There is a small theater that shows a film about the goddess A-ma.

The Maritime History Exhibition instructs on various aspects of Portuguese and Chinese maritime history during the fifteenth, sixteenth, and seventeenth centuries. There is a realistic model of a "Nau do Trato,” that was a kind of merchant frigate that was used for the lucrative but dangerous trade voyages between Macau and Japan.

Macau and its harbor during the seventeenth century are depicted by a three-dimensional model. The model shows the harbor, walls and fortifications. The model has an illumination system, and important places are lit up to show their location. Videos and electronics show the routes taken by the explorers.

The Maritime Technology Exhibition is on the top floor of the museum. There is a display about the Guia Lighthouse. The Guia Lighthouse was the first lighthouse built in southern China, and it is still used. There is an exhibition of nautical instruments used during the eighteenth, nineteenth, and twentieth centuries. There are octants, telescopes, straight edges, mariner’s compasses, sextants, and other nautical instruments.

The Aquarium Gallery has four aquariums. Each one represents a particular sub-aquatic environment with different species of fish. The first aquarium represents a riverbed and has fresh water. The second shows harbor fish. The third has coral reef fish; and the fourth has deep water fish. In this gallery, there is also a seashells collection of shells from around the world.

Address: 1 Largo do Pagode da Barra, Macau. It is next to the A-Ma Temple.