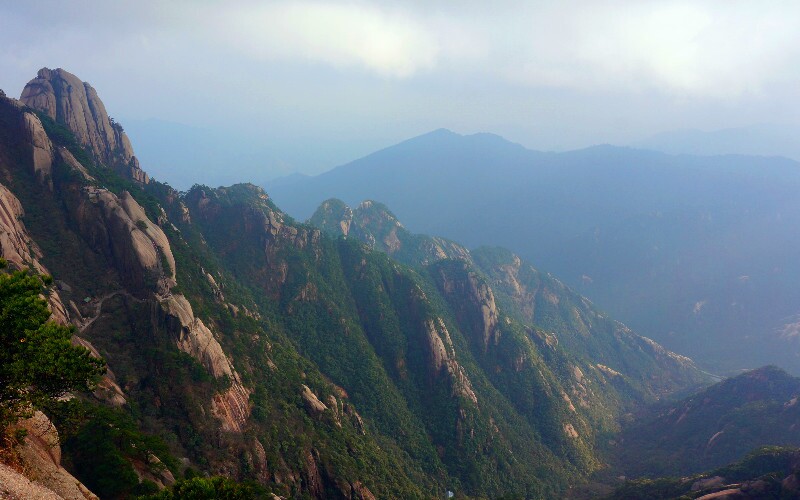 This scenic mountain range is famous in China for its scenery and beauty and for its its history. It was a famed religious mountain in the past, and in modern times it is famous for its historical role in the lives of China's leaders. Now it is an excellent place to hike and sightsee in southeast China.

Mount Lu has been listed since 1996 as a UNESCO World Heritage Site. It is dotted with old temples and structures. A major plus for most tourists is that the park isn't yet as built up as other national parks in China, so you can enjoy some rugged scenery and hiking with less crowds. Just one of Mount Lu's many waterfalls

Inspiring scenery: Numerous writers, poets, artists and calligraphers visited the mountains for inspiration. Over 900 cliff inscriptions and more than 300 tablets or steles with poems and couplets are testimonies to it's special place in ancient scholars' hearts. Mount Lu is therefore renowned as a cradle of Chinese landscape painting and literature.

Religious center: This was an important religious mountain in the dynastic eras. It also became a retreat center for foreign Christian missionaries in the 19th and 20th centuries who built buildings that are still used.

Academic center: Bailudong Academy (White Deer Cave Academy) is located on its slopes. It is one of the four most famous ancient academies in China. It was built in 940.

The Wulao ('Five Old') Peaks at the southeast side of Mount Lu are famous. They rise to 1,436 meters. The peak is named after the fact that the summit of the peak, cut across by a mountain pass, is split into five separate peaks. Seen from the base of the mountain, the five peaks look like five old men sitting on the ground. The Wulao Peaks are the best venue on Mount Lu to watch the sunrise and sunset.

The five peaks have a different countenance when seen from different points of view. Some angles find fishermen fishing, while from others, they look like old monks sitting cross-legged. Of the five peaks, the second peak stands out the most because of its oddly-shaped rocks. The third peak is the most dangerous. The fourth peak is the most beautiful, and the fifth is open and relatively expansive.

At the foot of the Wulao Peaks lies the most famous sight on Mount Lu called the Three Step Waterfall. The waterfall spills over three natural terraces formed by glaciers en route to the pool below. It has a drop of 155 meters. It is considered one of the highlights of the mountain as is evidenced by the local saying that any visit to Mount Lu is incomplete without seeing the Three Step Waterfall.

Donglin Temple, located at the west foot of the mountain, was built by a monk called Hunyuan who founded the Jingtuzong sect of Buddhism during the Eastern Jin Dynasty. It is one of the oldest temples on the mountain with a history of over 1,600 years.

All the buildings of Donglin Temple follow a vertical center axis. Along the axis are the Temple Gate, the main hall, the Maitreya Hall and the Shenyun Hall. Flanking the main hall are halls for 500 Buddist arhats. Behind Sanxiao Hall is the Scripture Tower and Congming Spring. Viewed from a distance, the temple buildings in their green shades look majestic.

Check out our Natural Scenery Tours and China Hiking Tours, or contact us for a customized tour.

nanchang Nanchang Travel Guide - How to Plan a Trip to Nanchang