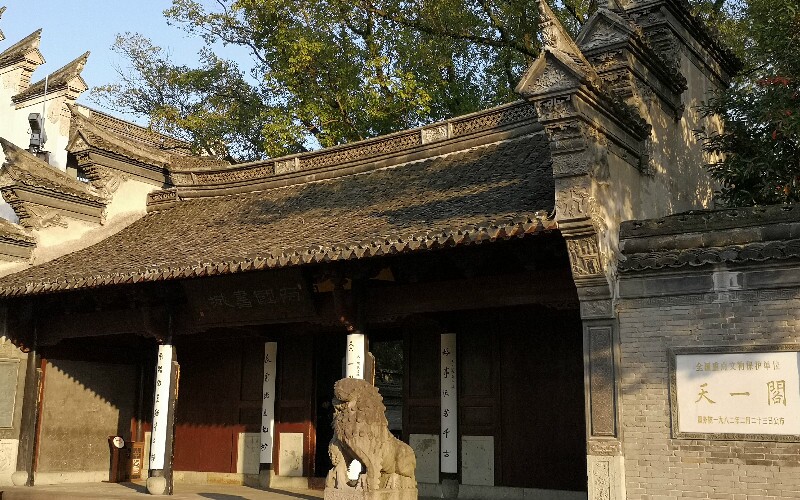 Tianyi Pavilion is a Chinese National Heritage Site that involves in its totality not only a pavilion, but a library, museum, garden, and several decorative halls that celebrate China's culture. It is the oldest library in Asia, and one of the three largest family libraries in the world.

This pavilion has become an icon symbolic of the city of Ningbo in which it is located and a frequently visited tourist destination. It has a long and glorious history and a serene, peaceful position on the shores of Moon Lake.

Part of the Heritage Site complex, the Tianyi Pavilion Library, founded in 1561 by Fan Qin, is the oldest library in all of Asia and among the oldest in the world. It has been referred to as "the Book City of South China" for its vast depository of ancient Chinese books, including tens of thousands of rare copies, both woodcuts and manuscripts.

In the 4th year of Kangxi’s reign in the Qing Dynasty (the year 1665), Fan Wenguang, the great grandson of Fan Qin, additionally built pond pavilion, planted trees around the pavilion and constructed artificial hills arranging rocks into piles shaped like lifelike and exquisite animals such as “nine lions and one elephant”, which is characteristic of gardening in the Yangtze River Delta.

Emperor Qianlong, after visiting the library, issued orders for detailed blueprints of the building and bookcases to be drawn up which he would then use as the basis for constructing the royal libraries Wenyuan Chamber and Wenjin Chamber among others. Thus the influence of both the books and the architecture of Tianyi Pavilion Library were quite widespread.

While once housing over 70,000 antique volumes, the British raid on the library after the Opium War removed numerous important works of a historical and geographical nature, and subsequently local thieves joined in to deplete the library's stores even further down to 20,000 by 1940. However, the collection is now up to a 30,000 book count since certain Ming era volumes have been recovered.

In 1994, Ningbo Museum and Cultural Protection Bureau merged together, and Tianyi Pavilion Museum was established. Now the museum has been expanded into three areas: book culture, exhibitions, and gardening leisure.

The Garden, Museum, and Other Features

About 1665, the founder's great grandson constructed a pavilion by the pond, surrounded the pavilion with trees, and arranged rocks into man-made hills shaped like various types of animals. This greatly beautified the grounds and made Tianyi a place of art as well as of learning.

The Tianyi Pavilion Museum was established in 1994 to exhibit the history and culture of Ningbo and of the Tianyi Pavilion itself. Some of its branches include: the Calligraphy and Painting Hall, the Local Chronicles Hall, Chens' Ancestral Hall, and Qings' Ancestral Hall. Also to be found in the complex is a statue of founder Fan Qin, Zunjing Hall, the Qin Family Drama Stage, and much more.

Location and When to Visit

Ningbo is a seaport about halfway up China's coast and is part of Zhejiang Province. It is located 127 km (76 mi) east of Hangzhou and its distance from Shanghai is 253 km (152 mi) by land, going south around Hangzhou Bay, though much shorter if one flies in a straight line across the water. It is easy to reach Ningbo by bus, train, or air, and Tianyi Pavilion is conveniently located downtown next to Moon Lake (in Chinese, Yue Hu).

As July and August are quite hot and December through February are somewhat chilly, it is generally best to visit Ningbo in the spring or fall. One should also note that June, August, and September are months of heavy rain. As far as events, there is a springtime (March 22nd) Fenghua Peach Flower Festival to attend and an autumn Ningbo International Fashion Fair (October 23rd to 26th) that some will want to plan on attending.

More to Do In and Around Ningbo

Anyone visiting Ningbo should not miss to try some of their famous local seafood dishes known as "Yongbang," for this city has a unique culinary tradition that is extremely delicious. One should also stroll through the expansive Tianyi Square which was designed by famous Chinese architect Qingyun Ma, stop by the Mahayana Buddhist Baoguo Temple 15 km (9 mi) north of town, and see the tower on the top of Zhaobao Mountain only 20 km (12 mi) to the northeast.