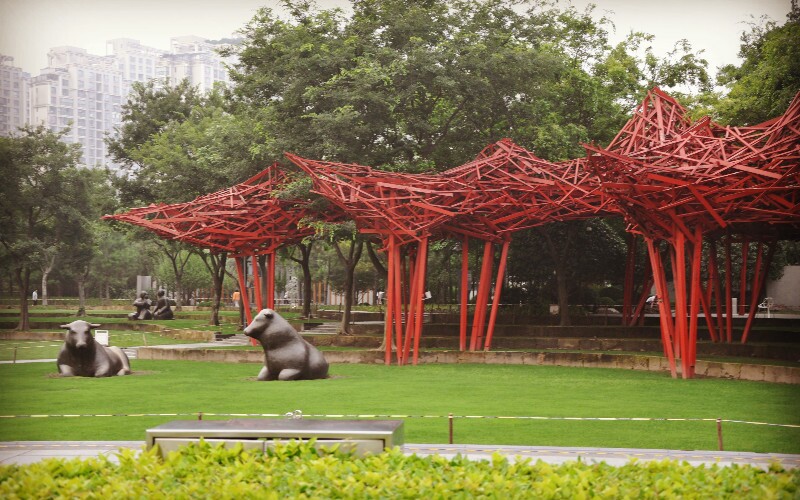 There are three main halls that date from about 1880. The complex was reconstructed after a devastating fire in the early 1972. Two large new buildings have been added that are about 13 meters tall on both sides of the main gate. These new buildings cost almost a million USD to build. The Ming Dynasty-era copper bell is now housed in the main hall. Another large bell that was cast in 1999 is also in the complex.

There is a large tripod shrine in a court area where people burn sticks or paper and try to throw coins for good luck. The shrine is tall, so they try to throw the coins into its windows or onto it. Kids seem to like this game. Old women repeatedly bow as they burn papers or sticks.

Visitors will see figures other than Buddha at the temple.These are statues of historical figures and ancient gods of China's major indigenous religion called Daoismin the temple. The tall modern buildings rising around it that you can see from inside the complex detract from the religious atmosphere.

The name of the temple in pinyin is Jing'an Si. This means tranquil and peaceful temple. It is said that the site became a temple site in 1216. The temple was moved from another place at that time. The temple site became a plastics factory during the cultural revolution, and the buildings were burned down in 1972. In the 1990, following reconstruction in the 1980s, the temple complex was reopened. The site is nationally protected.

Getting there: If you are in Shanghai, getting there is easy since it is downtown next to a subway station. Subway Line 2 goes there. Get off at the Jing'an Temple Station stop and exit by Exit 1.

Price: Entry price is about 20 RMB. On the 1st and 15th day of each lunar month, entry is free. The 1st day of the lunar month is the new moon, and the 15th day is the full moon which is considered the holiest or most auspicious time.