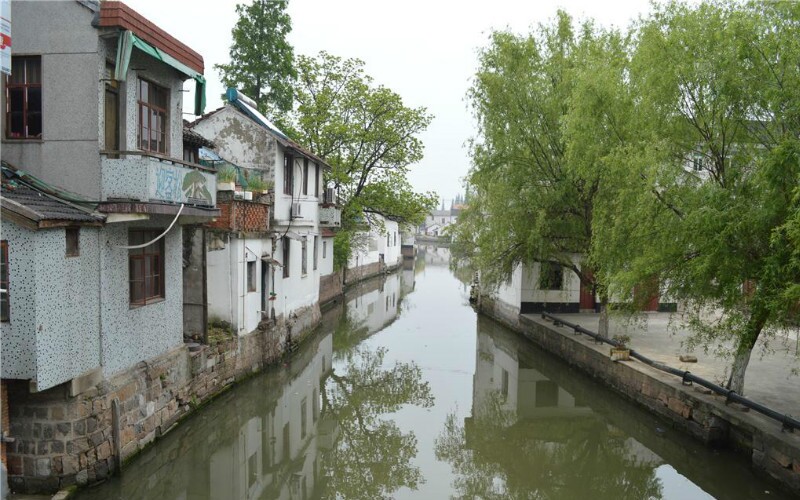 The Jinze Township of Shanghai Municipality is a resort area beside the Dianshan Lake park area. There are 7 old bridges. The oldest bridge dates to the Song Empire.

In this old agricultural area, people built bridges over the canals over the centuries. It is said that there were originally 42 old bridges, but now there are 7 remaining bridges. Most of them are stone bridges. It is interesting that the bridges originally dated from the Song, Yuan, Ming and Qing eras.

Jinze Township 金泽镇 is a resort area that was recently built in a traditional agricultural area called Qingpu District (青浦区). The highlights of Jinze Township are its old architecture. There are old buildings, and there are 7 bridges that have a history of at least 700 years. They date from the last four Chinese empires of the Song (960-1279), Yuan (1279-1368), Ming (1368-1644) and Qing (1644-1912) eras. The bridges are not big, but they are interesting to see. They are preserved as an old bridge display and are a part of the resort area around Lake Dianshan that is the only freshwater lake in the Shanghai area.

Puji Bridge and Wangan Bridge both have a history back to the Song era. It is thought that the Puji Bridge is the oldest one around Shanghai. It is said that it was built in 1267. There is a single arch. Wangan Bridge was originally built at about the same time or perhaps earlier. It has a pavilion at the center of the bridge, so it's also called Pavilion Bridge.

Yingxiang Bridge was originally built in the Yuan Dynasty Zhiyuan Period. It was built when the Mongols ruled the area. It is a thin bridge composed of six pillars and five arches. It is a bridge that is now composed of bricks, stones, and wood.

Ruyi Bridge was built in the Qing Dynasty. It is the best preserved bridge. It is 50 meters south of Animal Freeing Bridge.

The area around Jinze Township and Dianshan Lake is a resort and park area. Zhujianjiao Ancient Town 朱家角古镇, Eastern Oasis 东方绿洲, the Sun Island Holiday Village 太阳岛度假村 are places you can go.

China Highlights can help you customize a tour to visit Jinze Town and other highlights in Shanghai.