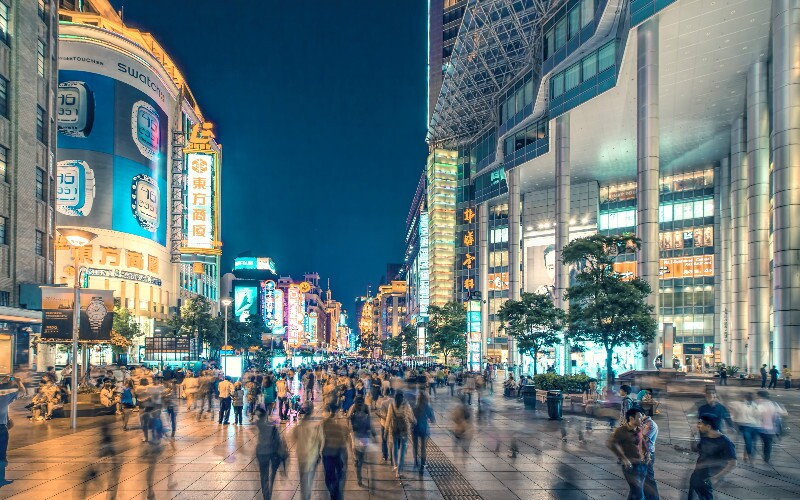 Nanjing Road enjoys a history of over 100 years and used to be called “Parker Lane”. It was named Nanjing Road officially in 1865 and turned into a pedestrianized road in 1999. According to statistics, there are over 1,700,000 visitors to Nanjing Road every day.

The Characteristics of Nanjing Road the Stores along Nanjing Road Shopping must be the theme of East Nanjing Road, on which there are lots of old stores, famous stores and large commercial buildings. If you don’t have enough time and want to raise shopping efficiency, China Highlights recommends you visit the essential stretch of Nanjing Road, which lies between Huanghe Road and Henan Zhong Road.

Many famous stores converge on this section, like the Number 1 Department Store, Hualian Department Store, the New World Comprehensive Consumption Circle, Itokin and so on. You can enter the New World Comprehensive Consumption Circle directly from People's Square station of Subway Line 1 and Subway Line 2. And, after going across the passenger footbridge over Xizang Zhong Road, you will see the Number 1 Department Store and Nanjing Road Pedestrian way, where there is no crowded traffic but it is prosperous and elegant. You will feel pretty pleased when doing your shopping, relaxing and tasting delicious food there.

At the eastern end of the pedestrian area lies the subway station of Nanjing East Road, from where you can take Subway Line 2 to get to Lujiazui in Pudong (the Oriental Pearl Tower and Jinmao Tower are located there). Or, you can retrace to another topgrade "business area" on Nanjing West Road — Meilong Town, CITIC Pacific and Heng Long Square (it costs only 3 RMB if you take Subway Line 2 from Lujiazui to Nanjing Xi Road).