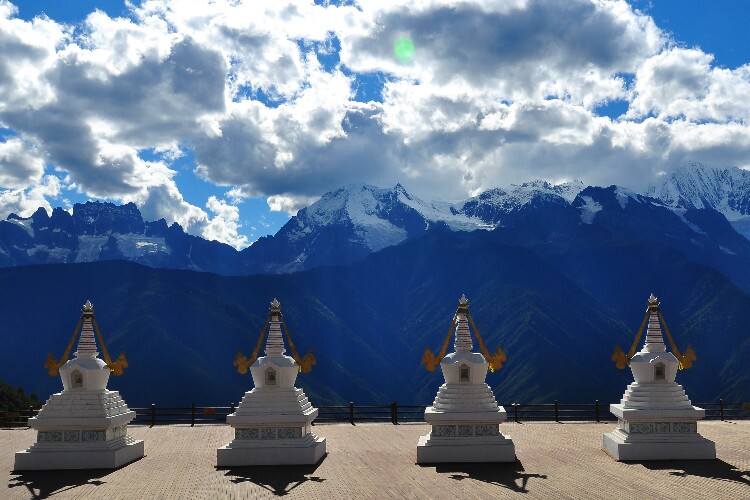 Feilai Temple is along the Yunnan-Tibet Highway. It is 10 kilometers away from the downtown area of Deqin County. Situated to the east of Meri Snow Mountain, Feilai Temple is the best position to enjoy the view of Meili Snow Mountain. It was originally built in the 42nd year of Ming Wanli’s reign (1614 AD), with a history of almost 385 years.

Facing the north-west, the temple was established according to its terrain. It has an advantage of a commanding position overlooking the mountain and the village. Towering old pines, mottled shadows, twisting streams and droning waves pop up along the way. The temple has an area of about 1,500 square meters. The buildings are distinctively scattered, with halls and houses echoing with one another.

In the temple, it is warm in winter and cool in summer. It is a holy land for summer vacations, weariness relief, meditation and soul cultivation. It is also a pleasant place for men of letters to recite poems, write antithetical couplets and to paint.

There is a legendary story about Feilai Temple. Originally, the temple was to be built in a place two kilometers away from the present site. All the materials had been prepared.

But the night before the project started, the major construction materials, such as the columns, disappeared suddenly. The monk in charge sent people to look for them. When they arrived at the present site, they found that the columns had been put in place according to their specifications, without any posterior beams and columns, as the hall.

There is a cold clean spring in front of Feilai Temple, which is said to be good for retaining beauty and longevity. The monk in charge is said to have lived a long life due to his frequent drinking from the spring. As a result, people who climb up the mountain all rush to have a drink of the water, and they even take away several bottles of the spring water with them when they leave.

The architectural features of Feilai Temple are very distinctive. The most impressive feature lies in the sculpture art of Haichao Hall, which is the main construction of Feilai Temple. The construction structure of the hall is of a single eave hanging on the top and seven pieces of wood supporting the beam. With a horizontal distance of 3 Jian, the beam is of a clear and regular structure. It is made of a large round piece of wood.

The head is simple, and the peripheral columns are standing on the Sumeru Throne; the waist is engraved with characters, flowers and other embossed designs. Under the eave, wood carvings are soft, beautiful and unique. In front of the hall, partition doors are numerous, and the windows are of exquisite patterns and experienced craftsmanship.

The main hall of Feilai Temple is hewed into a flat base on its terrain. Taking advantage of its terrain, it forms a mountain wall, which is still very firm and splendid now. The craftsmen carved the main sculpture of the hall out of the mountain and rocks: the Sculpture of the Haichao Dragon King Sending His Daughter to get Married.

On the left of the sculpture are the Eighteen Arhats with various expressions and gestures. While on the right are the exquisitely and vividly carved characters of the Pilgrimage to the West (one of the four famous classical masterpieces in China, telling the story of the pilgrimage to the West and the 81 adventurous experiences of Tang Priest, Sun Wukong, Zhu Bajie and Sha Wujing).

The best time to visit the temple is from January to May between winter and spring. The period between October and December is suggested if you wish to see Meri Snow Mountain from Feilai Temple; The sunrise time at the Feilai Temple is at about 6 am around the summer solstice, and at about 8 am during the winter solstice. Only between the lunar mid-July and September can you have the opportunity of shooting the scenery of the moon hanging over the Meri Snow Mountain at sunrise.

There are a lot of hotels near Feilai Temple. They are different in standards and types, and also have wide price ranges. They are suitable for all kinds of tourists. The travel advisor of China Highlights will arrange the best local accommodation for you.

Take a scheduled bus from Deqin County to Mingyong Village. The bus leaves from the bus station at about 4:30 pm, and passes through Feilai Temple on the way. You can also rent a car from Deqin County. It takes around 20 minutes.