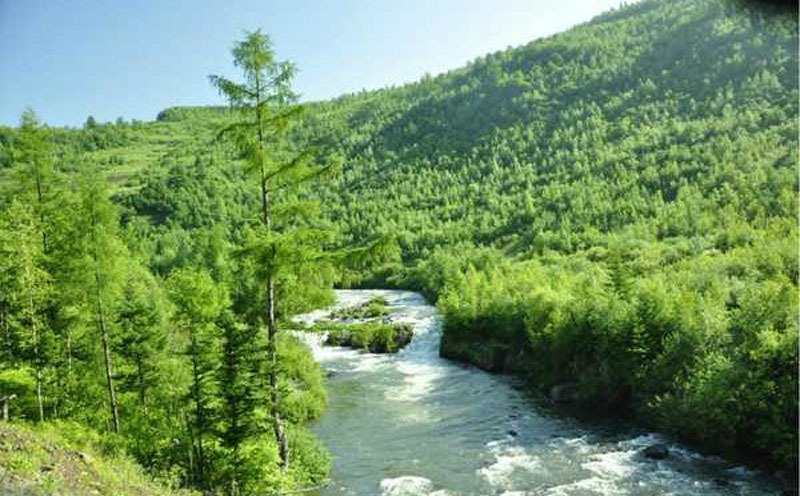 Tonghua Travel Guide - How to Plan a Trip to Tonghua

Nestling among hills at the southwestern foot of the Changbai Mountains in south eastern Jilin Province, Tonghua is an uneven city with enchanting landscapes. As one of the open-border cities in China, it meets Baishan City in the east, adjoins Liaoning Province in the west, connects Jilin City and Liaoyuan City in the north, and faces Democratic People's Republic of Korea (DPRK) with the Yalu River in-between. Tonghua City enjoys rich resources of tourism, both special natural landscapes with green mountains and clear rivers and fantastic culture scenic spots so as to win the renown of "Jiangnan in Northeast China". Influenced by its climate and geographical features, Tonghua is also an ideal place for skiers in the winter. Nowadays two large ski resorts have been constructed, Qian Ye Lake (千叶湖) (the Ice and Snow World) and Jinchang Ski Resort (金厂滑雪场). As for food, Tonghua local dinning culture is fashioned by that of the Korean nationality; Korean snacks and dishes stick out all over the city. In addition, the local fish dish remains a constantly good choice for every traveler as well, for Tonghua is abundant in fresh food fishes.

Tonghua City is extremely rich in nature resources of tourism. For example, Duck Park Water-eroded Cave (鸭园溶洞) in the suburbs offers a mystery for every visitor; Jiangnan Ski Resort provides with an aerial ropeway and world-class ski run; Sanjiaolongwan Lake inside the Huinan County, one of the administered counties of Tonghua City, shaped naturally by the eruption of an ancient volcano, gives a special scene of a circle of huge stones piercing the sky; Luotong Forest, Yinggebu Reservoir, Sanxiajian Forest Park and many other attractions spread all across the city offering different and exciting experiences.

Besides, there are renowned historical sites in and around Tonghua City. For example, Ji'an ancient city, the capital of Koguryo (the former Kingdom in the Korea today), is filled with enormous relics with over 1500-year history. Among them, the General's Tomb, a huge limestone tomb, is praised as "the Oriental Pyramid", and other tombs like Donggou Ancient Tombs, Wukui Tomb and Changchun No.1 Tomb supply many frescos as evidences to display the economic, political and cultural prosperity of Koguryo Kingdom. What's more, the Stele of Great King Haotaiwang, some old walls, beacon towers and relics of ancient battle fields inside the Sanjiaolong National Forest Park, and in particular the Pavilion of Jade Emperor inside Yuhuangshan Park are all popular tourist attractions.

Known as the cradle of skiing, Jinchang ski resort in Tonghua is the first ski center established in China. With comprehensive facilities, the center has held seven national ski competitions; besides, Tonghua Ginseng Tour, Wanwanchuan Tourism and Resort Zone, Wukuishan Park, and Mopan Lake Park are all great tourist destinations.

Tonghua City, located in the southwest of Jilin Province, features the temperate humid monsoon climate. The high seasons for Tonghua are summer and winter, also the best time to travel Tonghua.

Tonghua is of typical north China scenery with snow everywhere. The Qianye Lake (the Ice and Snow World) and Jinshan Ski Resort are both comprehensive tourist destinations integrating eating, drinking, entertaining and living. However, due to the extreme coldness and dryness, visitors should pay attention to protect themselves. When skiing, visitors would better wear snow goggles to avoid being injured by the sunlight reflected by the snow.

About 6,000 years ago Tonghua witnessed human beings started to live there. It is the cradle of both Koguryo and Manchu cultures, China's northeast ethnic minority groups. Koguryo Kingdom (37 BC – 668 AD) had Tonghua as its capital for 425 years, so a large number of precious relics and cultural sites have been retained and preserved; among more than 300 various cultural sites, four are Historical and Cultural Sites under State-level Protection and 15 Historical and Cultural Sites under Provincial Protection. What is more, Wanfa historical site is one of the top ten archaeological discoveries in China.

There are diverse nationalities in Tonghua City, together creating a unique regional culture and folk customs. For example, Tonghua Manchu paper cutting is one of China's three major ethnic paper cuttings; three artists are included in the "the top ten Chinese folk paper-cut masters" list.

Tonghua have a glorious revolutionary tradition. During the Anti-Japanese War (1937–1945), the national hero Yang Jingyu (杨靖宇) once fought dauntlessly there. And during the Liberation War (1945–1949, a revolutionary civil war in Chinese history), here is the main battlefield of the "Four Times for Protecting Linjiang" (四保临江, Linjiang is a city in Jilin Province). What is more, Tonghua is the cradle of the Chinese Air Force, because the first aviation school in China was founded there.

Tonghua Longwan Wild Azalea Flowers Tourism Festival began to work in 2005, serving as one of the local festival activities. Wild azalea flowers are abundant in Tonghua because of its geographical features, and they mainly grow in Dalongwan (大龙湾), Sanjiaolongwan Lake (三角龙湾湖畔) and Wuseshan Valley (五色山花谷).

In the Changbai Mountain area, Tonghua is rich in wild life and plants. There are abandant ginsengs, mushrooms, fungus, edible wild herbs and medicinal herbs in Tonghua..

Tonghua is also known as "the land of wine". The wine is brewed with wild grapes in Changbai Mountain, featuring pure taste and bright color. The wine is special and high in value because some medial herbs like ginseng are added in.

Travelers who would like to purchase these local specialties can go to the business street near the railway station and the business district of Xinhua Street (新华街). Besides, there are also many other popular local products such as bog bilberry, rhododendron aureum, papaver alpinum and Shen Mingkun stone carving. Tonghua Manchu paper cutting is one of China's three major ethnic paper cuttings; three artists are included in the "the top ten Chinese folk paper-cut masters" list.

The most unique entertainment in Tonghua must be skiing. As a land of ski, Tonghua is one of the ideal places for skiers. There are two large ski resorts near the urban area: one is Jinchang ski resort 15 kilometers southwest from Tonghua City and another Qianye Lake (the Ice and Snow World).

Tonghua local food features the flavor of special characteristics of both Korea and Manchu nationalities due to its unique geographical position, located at the south western foot of the Changbai Mountains in south eastern Jilin Province and serving as one of the three open-border cities to Democratic People's Republic of Korea in China. Meanwhile it is the permanent residence for Manchu nationality.

If you want to taste the snacks, the gourmet street, the Minzhu Road (民主路) inside Tonghua City, is highly suggested; in addition, around some attractions you can also enjoy these special snacks. For example, you can have a taste of the Korean cold noodles and barbecue in the Yalu River border tourism area.