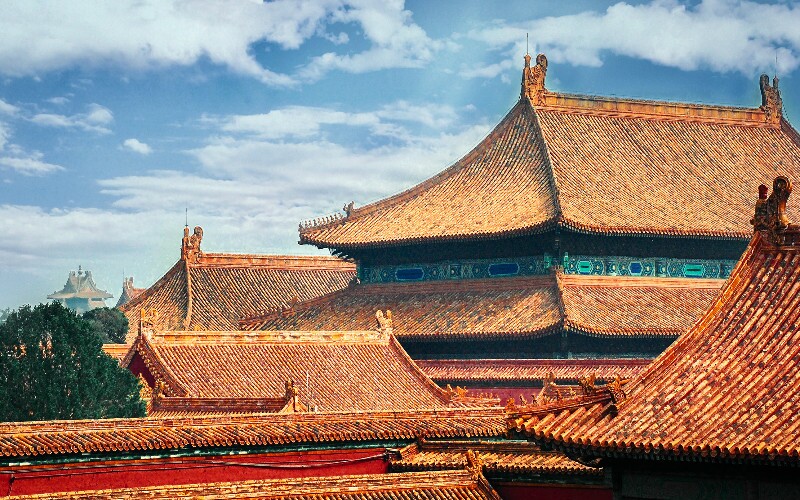 Prince Teng's Pavilion was built by Li Yuanying (Emperor Li Shiming's brother) in 653, during his reign in Hongdu (the present Nanchang) as a governor in the Tang Dynasty, where the ancient literati and officials used to regale their honored guests with feasts and recite poemsI. Its reputation was to a great extent attributed to Wang Bo's poem Preface to Prince Teng's Pavilion.

Prince Teng's Pavilion has gone through rises and falls since its inception. It was burned to the ground during the confused fighting among warlords in 1926, and the present pavilion was reconstructed in 1985. The 57.5-meter-tall pavilion has nine stories. Magnificent and elegant, it is decorated with green glazed tiles, gilded double-eaves, carved lattices, and vermilion pillars, with a garden, rockeries and a lotus pond outside the pavilion. The archaic-style halls are well-decorated, and were used for appreciating ancient music, dancing, and operas.

Standing on the top of the pavilion offers visitors a panoramic view of Nanchang, including the nearby antique commercial streets, the roaring Ganjiang River, and the faraway verdant mountains. On a sunny day in autumn you'll have a chance to appreciate the wonderful scene of "a lonely wild duck flies with the sunset clouds; the autumn river mirrors the color of the sky" (excerpt from Wang Bo's Poem - Preface to Prince Teng's Pavilion).

Yellow Crane Tower was built by the king of the State of Wu out of military necessity in 223, and destroyed in a fire in the 10th year of Emperor Guangxu's reign (1884) in the Qing Dynasty, during which it served as a sightseeing spot for literati.

Many noted poets, such as Cui Hao, Li Bai, and Lu You visited the tower and wrote poems about it, and the most famous poem (also called Yellow Crane Tower) was written by Cui Hao, which reads:

The stage on yellow crane was gone amid clouds white.

To what avail is Yellow Crane Tower left here?

Once gone, the yellow crane will ne'er on earth alight;

Only white clouds still float in vain from year to year.

By sunlit river trees can be count'd one by one;

Where is native land beyond the setting sun?

The mist-veiled waves of River Han make me homesick.

Li Bai, the most famous poet in the history of China, felt ashamed to write a poem about the tower after reading it, because he thought Cui's poem was beyond comparison, and Yellow Crane Tower has become famous throughout China ever since.

The present tower was built on the 1,000-meter-tall Snake Mountain in 1981. It's a 5-story landmark of Wuhan, 50.4 meters tall, and crowned by a pyramid-roof with upswept eaves.

The decorative style inside the tower varies from one story to another. The first story is a spacious hall with a 10-meter-tall caisson ceiling. On the hall wall of the second story are carved the inscriptions of "Records of Yellow Crane Tower", with a fresco on each side. The portraits of famous poets, such as Cui Hao and Li Bai, and their poems are carved on the hall of the third story. Modern calligraphy and paintings are exhibited on the fourth story, and the frescos decorate the fifth story, highlighted by the one themed Great Yangtze River Scenery.

Known as the Troop-Reviewing Tower in the Three Kingdoms Period, Bailingcheng Tower in the Southern and Northern Dynasties, and the South Tower in the early Tang Dynasty, Yueyang Tower was built on the east bank of Dongting Lake in 221, witnessing the Yangtze River rushing to the sea for over 1,700 years.

Yueyang Tower is wooden building of 21.5 meters tall, roofed by yellow glazed tiles, with a tablet inscribed "Yueyang Tower" hanging in the front. It's celebrated in China for the sake of Fan Zhongyan's (the Vice Prime Minister of the Song Dynasty's) poem — Records of Yueyang Tower.

The three-story tower is richly decorated inside. A carved screen of "Records of Yueyang Tower" is placed on the first story. The calligraphy and paintings are exhibited on the second story. The poem, Climbing Yueyang Tower by Du Fu, is carved on the screen of the third story.

Standing at the top of the tower you can appreciate magnificent views of Dongting Lake and the Yangtze.

Penglai Pavilion was built on Danya Mountain top, in the 6th year of Jiayou Period (1061) in the Northern Song Dynasty, where the sea scenery is extremely beautiful. Penglai was the very place where Emperor Qinshihuang sent his men to set sail to on a voyage in search of elixirs, and it's also the birthplace of the legend of the Eight Immortals Crossing the Sea, adding much cultural connotation to the pavilion.

Penglai Pavilion architectural complex is composed of Triple Purity Hall, Lvzu Hall, Su Shi's Memorial Hall, Goddess of Heaven Hall, Dragon King Palace, and Maitreya Hall. The two-story Penglai Pavilion is wooden and 15 meters tall, over which a plaque reading "Penglai Pavilion" hangs. On the second story is a veranda, which is the best place for appreciating the view.

The Immortal Bridge below the pavilion is delicately carved, and it's where the eight immortals began to cross the sea, according to ancient Chinese myths.