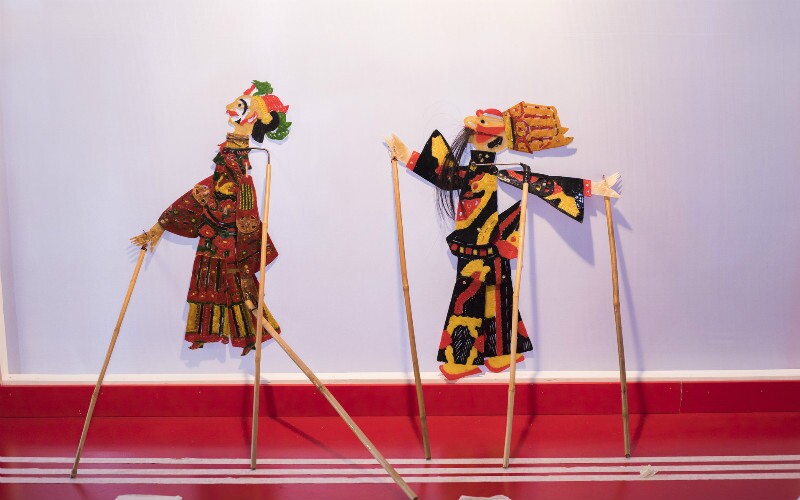 The face-changing performance is part of Sichuan's ancient opera style.

The ancient Chinese people worked for long hours each day. To relax and enrich their social lives, numerous games were invented. Many of them had a long history of over 1,000 years.

Chuiwan was one of the ball games in ancient China, which was prevalent in the Song Dynasty (960–1279). Literally, "chui" means "hit" while "wan" means "ball" in Chinese.

Chuiwan resembled golf. In a large field, players were divided into two groups, with two to ten people in each. Everyone had three opportunities to hit the ball into holes with a rod. Only when three hits into the hole were achieved did the player win.

Dating back to the Warring States (475–221 BC), cuju was an ancient Chinese football game with a long history of over 2,000 years.The ball was made of leather on the outside and filled with rice bran inside.

As a fun and relaxing game, cuju was used in the military to train soldiers. Its rules were similar to football — about twelve people were in each group, the use of hands was not allowed, only the feet and head could be used, and the ball should be hit into the opposite goal. The board game Go is a classic Chinese strategy game.

There were many kinds of board games in ancient China. The most popular ones were Chinese chess (象棋, xiàngqí) and Go (围棋, wéiqí). They were both strategy board games for two players.

Played on a board that was nine lines wide and ten lines long, Chinese chess had two colors: red and black. Each side had a general, advisors, elephants, horses, chariots, cannons, and soldiers. The object was to capture the enemy's general.

Go is complex. The standard board has a 19x19 grid with 361 crosses, where either white or black stones are placed by two players taking turns. The aim is to surround a larger total area of the board than the opponent.

In ancient China, it was a form of entertainment for both men and women, the young and the old, and the rich and the poor. There were five branches of traditional Chinese opera, including the Beijing Opera, Yueju, Huangmei Opera, Pingju, and Yu Opera respectively. A Chinese woman playing the guzheng has long been a popular accompaniment to meals in China.

Music played an important role in people's social lives in ancient China. Thus traditional musical instruments were popular in ancient China, but mainly among the rich class as they had leisure time to enjoy the music while the poor had to work to make a living.

The guzheng was one of the most prevalent musical instruments. It had 16–25 strings with movable bridges. It was played with the right hand plucking the strings while the left hand pressed to produce vibrations and change the pitch.

Other musical instruments, such as the dizi, xiao, and yangqin, were also popular in ancient China. Cricket fighting, which was often held in autumn, originated from the Tang Dynasty (618–907) and was prevalent in the Song Dynasty (960–1279). The battle was held in a ceramic can. At the same time, their owners would use a grass stalk to stimulate them to fight.

Generally speaking, the battle would last for several minutes. For some stronger ones, it could last even longer. To win in such a battle, the owner preferred to choose a strong cricket with a big headand legs, and good coloring. They would feed them with a special diet to keep them in fighting shape. Kites were invented by a farmer in ancient China, in the Eastern Zhou Dynasty (770–221BC). Originally, kites were used to send messages in the military and it wasn't until the Song Dynasty (960–1279) that they became people's favorite outdoor activity.

Paper or silk were major materials for making a kite with bamboo being used to craft its skeleton. While playing, one flyer stood downwind with the kite and the other flyer ran while plucking the string. To fly a kite successfully, wind was necessary.