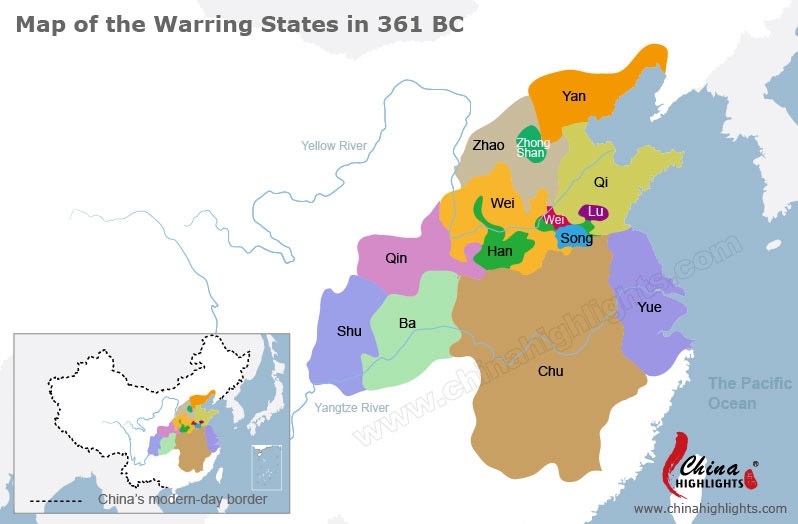 2. The Warring States Period began because…

The independence of vassal states was caused by the Zhou Dynasty’s system of enfeoffment: in order to strengthen the Zhou king’s power, nobles who contributed to the dynasty were awarded land.

3. The Warring States Period was dominated by 7 warring states.

4. Wei and Chu were the strongest at first.

Here are power rankings of the seven states during the Warring States Period:

5. The rise of Qin was due to legalism.

In 361 BC, a legalist called Shang Yang, who was born in the Wei state, went to Qin, and his legalist reform proposal was adopted by Duke Xiao of Qin (ruled 362–338 BC).

Shang Yang espoused rule according to a defined set of strict rules and a clear political philosophy. By 338 BC, although Shang Yang was eventually killed, his reforms made Qin the most powerful and ruthless state, both in military and economic terms.

Thanks to Shang Yang's reforms, Qin had become the most powerful and ruthless state, and possessed the power to unify the Warring States.

Ying Zheng, later to become the first emperor of the Qin Dynasty, started to "rule" the Qin state in 246 BC when he was 13. His ruling court mobilized Qin for conquests, and Ying Zheng was in full control by the time preparations were made in 230 BC.

In 221 BC, Qin had finally conquered and unified the six states, kicking off the first unified feudal dynasty in Chinese history.

In 230 BC, King Zheng started his conquest of the Warring States. He adopted his chancellor Li Si's idea that the whole conquest should be carried out in order of difficulty.

8. The name ‘Warring States’ came from an ancient work — Zhanguoce.

The Battle of Changping was fought between the states of Qin and Zhao.

Qin adopted the strategy of retreating by feigning defeat, luring Zhao out of its position, and then dividing and encircling the Zhao army, cutting off its supply route and finally annihilating it, winning that war.

The Battle of Changping was the earliest, largest, and most thorough large-scale annihilation battle in ancient Chinese military history. This battle accelerated the process of unifying the six states of Qin.

This was a military reform carried out by King Wuling of Zhao (reigned 325–299 BC) to strengthen his military power.

The borders of Zhao were often invaded by nomadic people from the north on horseback. Mounted warriors could move quickly and were more flexible than the chariots and spears used in the Central Plains.

King Wuling of Zhao also adopted the characteristic military clothing of nomads — short clothes with narrow sleeves, which were more convenient for fighting compared to the wide sleeves and long clothes of the Central Plains people.

So, he established a cavalry and required his soldiers to wear short coats, belts, and boots. After the military reform, Zhao became the most powerful state except for Qin at that time.

11. The Warring States produced some of China’s great philosophers.

In order to gain a dominant position in the struggle, the various vassal states recruited talents and carried out reforms. The free social environment produced a number of philosophers, such as Mencius, Xunzi, Mozi, and Han Feizi, with their different ideas and thoughts, which had an important influence on Chinese culture.

12. The philosophy of rule of law was highly valued.

The philosophy of rule of law first emerged in the Spring and Autumn Period. Later, in the Warring States Period, it was developed and supported and became a strong school of thought.

The states of Wei, Chu, and Qin all adopted legalist ideas and carried out reforms. Qin's unification of the six states owes a great deal to legalism and later it became the philosophy for governing state affairs in the Qin Dynasty.

These methods were invented by Bian Que, a highly skilled doctor. His four principles of diagnosis — look, listen, question, and feel the pulse — are still widely used today. They are the basis for traditional Chinese medicine.

14. The prototype Great Wall was built in the Warring States Period.

The northern borders of Qin, Zhao and Yan were constantly harassed by Mongols and other tribes in the north, so long walls were built. Later when Qin unified the six states, these long walls were connected. That was the prototype Great Wall.

The timeline of the Warring States Period could be divided into seven stages:

See our Xi'an tours, which can be extended to Wuhan and Luoyang. Or contact us for a unique tailored itinerary.