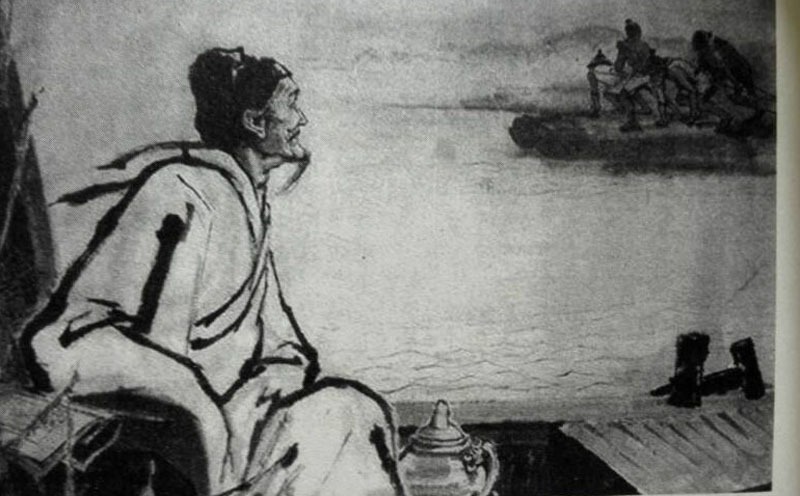 Du Fu (杜甫,712-770) was a famoius Realist poet who lived during the Tang Dynasty Era (618-907). That era is generally thought to be the era of the best ancient poetry. The poems were simple and about common topics people experience and can relate to.

He is thought of as one of the greatest realist poets of China. His poems reflect the hard realities of war, people dying next to rich rulers, and primitive rural life. It is thought that he lived in a simple hut near the end of his life where he wrote many of his best realist poems.

He served as an official in the Tang Dynasty’s court and then lived in Chengdu in a thatched hut, and he wrote more than a thousand poems that are still appreciated by modern Chinese people.

Dufu liked to write in a structured form of poetry that was called Lu Shi (律詩) or regulated poetry. The style has balancing couplets. He also liked to write about realistic things. His style of poetry is called Realist. Here is a famous couplet as an example:

Behind redden doors stink wine and meat;
But upon the road die frozen men.

Du Fu was born near Luoyang in 712. When he was a kid, he loved to read. “I read ten thousand volumes until they were worn out,” he said. He was educated to pass the Imperial Examination. He studied and memorized the Confucian classics of philosophy, history and poetry.

Perhaps one of the reasons people like his poems is because he wrote about the people and places he visited. In the 730s, he traveled to Jiangsu. In 735, he failed the Imperial Examination.

In the autumn of 744, he met Li Bai and became friends. They wrote poems about each other. Li Bai may have had a big influence on him. Like himself, Li Bai failed the Imperial Examinations.

However, Li Bai was appointed into the prestigious Hanlin Academy by the emperor himself. His example may have encouraged Du Fu to try to get into an official position in the same way by direct appointment because two years later he moved to Chang'an. After failing to pass the test a second time, he started to directly petition for an office in 751. In 755, he succeeded, and he received an appointment as Registrar of the Right Commandant's Office of the Crown Prince's Palace.

The An Lushan Rebellion began in 755, and in 756, the emperor was forced to flee the capital and abdicate. Dufu was captured by rebels and taken to Changan. Then he escaped Changan. He was appointed to the Office of Reminder in 757. This office gave him access to the emperor. Then he was demoted.

In 760, he arrived in Chengdu in Sichuan and lived for five years. He lived in a "thatched hut" (today’s Dufu’s Thatched Cottage in Chengdu) and in this time in comparative solitude away from Changan, he said he lived happily and peacefully. Then he sailed down the Yangtze River with his family, and wrote hundreds of poems. He died in 770.

He had a lot in common with Li Bai. Both traveled widely and wrote about ancient locations and natural places. Both were officials in the Tang Empire, but neither passed the Imperial Examinations for entry into court offices. Both of them also experienced the An Lu Shan Rebellion that started in 755.