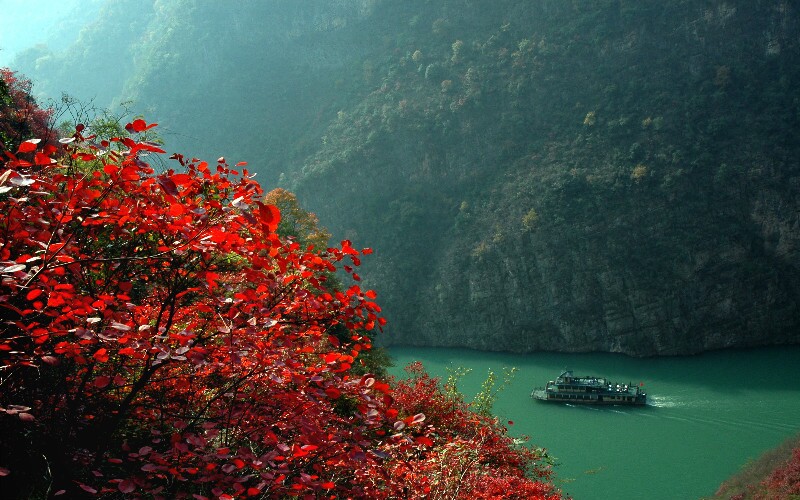 The Amazing Yangtze River — an Introduction for Travellers

China has stilled the Yangtze in the world's most flooded gorges.

The Yangtze stretches from a glacier on the border of Tibet to Shanghai. It's China's biggest river and the world's third longest river. China has harnessed the Yangtze for power and navigation with the world's biggest dam.

The Yangtze River is central to China and its history, and has a huge variety of tourist attractions, breathtaking scenery, and diverse culture along its length.

The winding Yangtze, if it were stretched straight, would stretch across the whole of China, from China to the UK, or from China to Alaska! No wonder the Chinese name for it is Chang Jiang, literally 'Long River'.

Men once arduously pushed boats with poles and pulled them with ropes up the Three Gorges for trade and travel.

The Yangtze River has been very strategic both militarily and commercially, dividing north and south China. The Yangtze both facilitated inland trade and cultural development and hindered north-south travel.

The Natural Boundary Between Kingdoms

The upper and middle reaches' deep gorges were perilous, and the lower reaches of the river were wide and prone to flood. >Unbridgeable until the last century, crossing by boat was the only way possible.

In Chinese chess, the Yangtze divides the board, representing one of China's most famous battles, the Battle of Red Cliffs (AD 206), which divided China's longest-lasting empire — the Han Dynasty.

Tourist Highlights of the Yangtze

The upper Yangtze reaches roar down canyons and valleys from the Tibetan Plateau to Sichuan Province. Ships can't navigate there.

Lijiang is the hub for the main Upper Reaches attractions.

At Lijiang, you can see the Yangtze in one of the world's deepest canyons, the spectacular Tiger Leaping Gorge, one of China's best hiking areas. While there, see the UNESCO recognized Naxi minority towns.

The First Bend of the Yangtze River has Naxi villages, river boats, and the historic crossing point of the Yangtze's upper reaches providing Tea Horse Road access to Tibet.

The Yangtze's middle reaches, between Chongqing and Yichang, are broad and placid and the most popular section for cruise ship touring.

For many centuries, Chinese artists and poets have praised the beauty of The Three Gorges. They have been painted by dozens of famous artists.

Now, the dam makes cruise ship travel easy, so you can enjoy the gorges comfortably.

Most of Yangtze cruise ships ply the Three Gorges and include a tour of the dam. They stop at the Lesser Three Gorges, and for other scenic and cultural excursions by the river.

See How to Plan a Yangtze River Cruise.

Zhujiajiao has quaint scenery and is one of China's most popular water towns.

The Yangtze's lower reaches, including the prosperous delta region, have many interesting cities to tour: Wuhan, Nanjing, Hangzhou, Suzhou, and Shanghai.

Only Victoria Cruises sail the full distance from Shanghai to Chongqing.

Scenic water towns, threaded with canals, are popular places for sightseeing and relaxing.

Contact us to travel the Yangtze on your tailor-made China journey.

You could also start your personalized tour plan from our recommendation: