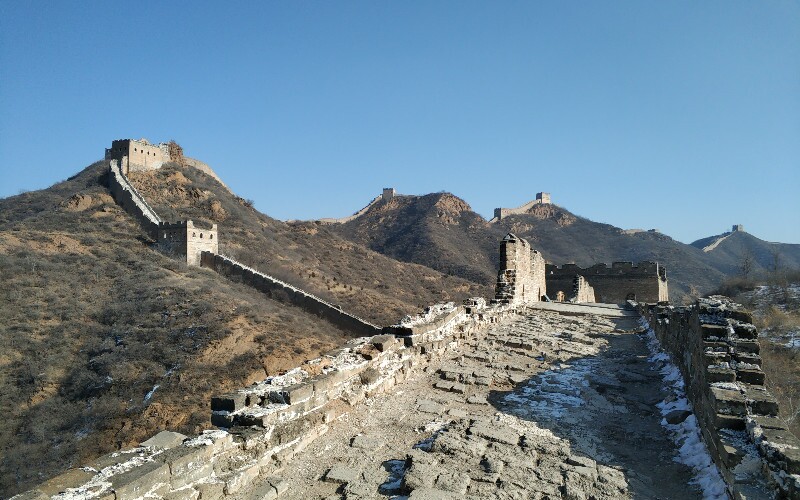 Meng Tian surveyed the geography and oversaw the construction of a Great Wall and forts along the border.

One of the Qin ruling court's main generals was Meng Tian. People are not sure when he was born, but it is said that his father was a Qin general. In 221, after the Qin Emperor and his court consolidated power over the territory of the other states, the Xiongnu were trying to push south.

In 221, the Qin Empire began, and the Xiongnu were a threat to the ruling court. In 214, the First Emperor sent Meng Tian to lead a big army of about a hundred thousand men to the north to drive them back. He succeeded in driving them back across a broad area.

Meng Tian's main accomplishments were driving back the Xiongnu and overseeing the construction of the first Great Wall, and then after his emperor died, he was killed by the main ruler in the Qin court.

The Xiongnu are a mysterious people because historians know little about them. They do not clearly know their ethnic origins or what tribe was the leading tribe. They were a threat to the Qin Empire and also a threat to another nomadic people called the Yuezhi who controlled the area to the northwest.

The Qin army was the best army in the region. The Qin ruling court spent decades building up a strong military complex with good roads for fast troop transportation and the most advanced weapons. They had mounted soldiers with advanced crossbows and iron swords that could cut through the bronze swords of the time. As part of the defensive strategy against them, Meng Tian surveyed the geography and oversaw the construction of a Great Wall and forts along the border. He used laborers numbering hundreds of thousands. The boundary they choose for the Great Wall that demarcated the land of the empire and the northern nomads was often the boundary of successive empires and kingdoms.

The defensive works were said to extend over 10,000 li or more than 4,000 kilometers. In this way, the southeastern areas were added to the empire.

The First Emperor was named Qin Shihuang. When he died, the two highest officials named Li Si and Zhao Gao hid the news of his death so that they could install his son as the next emperor because they thought he would be controllable. This means that they wanted to be the top ruler instead of Qin Shihuang's son.

They stated fighting among themselves because only one person could be the supreme ruler, so Qin Shihuang's relatives and many high officials were murdered. Zhao Gao killed Li Si. Meng Tian's death was brought about through the plotting of Zhao Gao. He was put in prison and was forced to commit suicide, and his family was killed as well. The Qin Empire ended soon after this.

China History 10 Fun Facts Every Tourist Should Know About Confucius