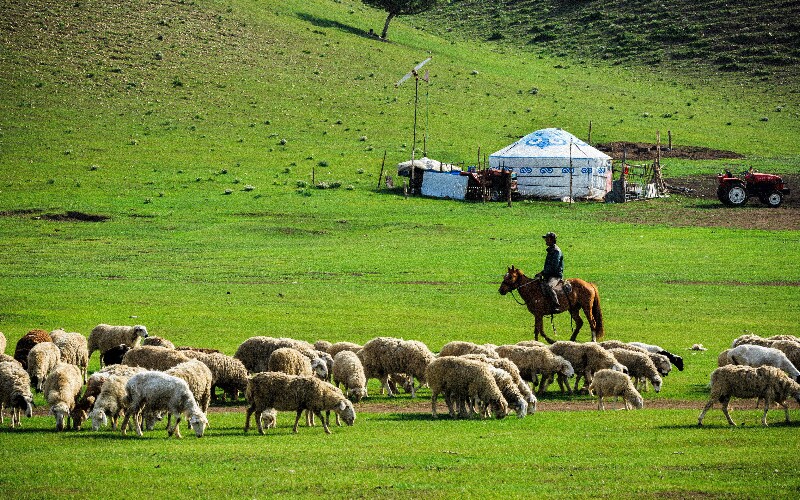 10 Facts About the Yuan Dynasty

The Mausoleum of Genghis Khan in Erdos in Inner Mongolia

The Yuan Empire (1279–1368), as part of the Mongol Empire, was China's biggest. The Yuan Dynasty was amazing for its size, humble beginnings, paper money, largest armadas, technology, monumental over-spending, and huge natural disasters. These 10 top facts draw out the highlights.

1) The Yuan Empire was founded by an illiterate nomad named Genghis Khan.

Genghis Khan (1162–1227) first subdued the Mongol tribes and other tribes under his command, and then he sent his people on a quest to conquer the world.

He trained his army, generals, and sons to be be victorious against the much more populous and scientifically advanced empires to the south and east. He directed his family to continue his attacks after he died.

2) The Mongols' campaign to create the Yuan Empire lasted 70 years!

The Mongols wiped out the Western Xia people and culture, but these mounds still remain.

The Mongols were persistent. Genghis Khan died in 1227 while destroying the Western Xia Empire.

His son Ogedei conquered the Jin Empire, and his grandson Kublai Khan finally conquered all the Song Empire in 1279. Their campaign for conquest of the region that is now modern China lasted 70 years!

See the ruins of Western Xia: Some of their remaining ruins can be seen at the Mausoleum of the Western Xia Dynasty.

Kublai Khan (1215–1294) ordered 3 million people to extend the Grand Canal (the longest canal in the world) to reach his capital in Beijing in the 1280s through hill country that earlier dynasties didn't dig through.

This gave Beijing direct inland access to southern cities and the Yangtze River basin for the first time, and helped the northern territory and the whole empire prosper.

4) Kublai's empire was the first to use paper money as the main currency.

In the year 1273, Kublai Khan issued paper banknotes that was backed by the government called chao. This was a big innovation in the banking and monetary system. Paper currency had been issued and used during the Song Dynasty era, but the Yuan Empire was the first in the world to use paper currency as the predominant circulating medium.

Europeans were astonished when Marco Polo described the money. For a while, paper currency helped increase trade with the rest of the world and facilitated prosperity.

5) Kublai's huge armadas were both wrecked by typhoons.

Kublai Khan sent two armadas to invade Japan, but Japan was favored by its bad weather.

He sent a fleet in 1274 that had 23,000 soldiers on 900 ships. Two storms wreaked havoc. The first storm sank 200 craft, and after failing to establish a base after several small battles, the army turned back, and a typhoon sank most of the ships.

Kublai sent a force of 140,000 and 3,500 ships seven years later. It was one of the largest armadas ever assembled. Another typhoon sank most of the ships. About 100,000 soldiers were killed or captured on land.

6) China once officially stretched to Europe!

Kublai's rule was not acknowledged by the Mongols who controlled western Asia. But the rule of his son, Emperor Chengzong, was accepted in 1309 by the three western Mongol empires who controlled territory as far west as Hungary.

Excluding the western domains, the Yuan controlled land stretched from far north of Mongolia to parts of Vietnam and from the Pacific Ocean to Central Asia. It was the largest of the dynastic empires that have existed in the region and probably the most powerful.

The Jingdezhen blue and white porcelain was innovated during the Yuan era.

There was major innovation of the white and blue Jingdezhen porcelain. They made better navigational compasses and invented firearms, exploding gunpowder-filled shell bombs, and exploding grenades hurled by slings.

A Yuan astrologer made the most accurate calendar up to that time, and they may have been first to use decimal numbers.

8) The Yuan mis-spent themselves out of power!

At the end of Kublai's life, the Yuan defeats against the Japanese and costly campaigns against countries to the south, alongside the court's large-scale construction projects, had drained the treasury.

Kublai's successors continued over-spending, over-printing paper money, and using much of their easy wealth for decadent living, while the people starved.

The rulers lost touch with their Mongol roots and the populace, and settled into Chinese imperial life. The hyperinflation impoverished the lower classes, who became rebellious.

From the 1320s onwards and especially after 1340, people in the countryside suffered from frequent natural disasters such as droughts and unusually cold weather from the onset of the Little Ice Age:

10) "Omens" urged the ethnic Chinese to out the Mongols!

The Yuan Dynasty didn't deal with the famine and flooding, and the people turned against it. Natural disasters and poverty left the people desperate and rebellious.

Rebellion leaders claimed that Yuan misrule had upset Heaven, and that the natural disasters were omens of loss of the Mandate of Heaven. The people rose up, encouraged that they were doing Heaven's work. Many rebellions started between 1351 and 1367, until Zhu Yuanzhang's large rebel army captured Beijing in 1368, and the Ming Empire began.

Discover More About Mongolians in China

Many descendants of the Yuan Mongol people still live in yurts in the grasslands of Inner Mongolia and Mongolia. Favorite tourist activities include visiting the plains to stay overnight in yurts, sightsee, and ride horses.

Beijing tours: Beijing was the capital of the Yuan Dynasty and continued as China's capital for most of the next 800 years. Discover the enduring charm of the 'big capital' with China Highlights.

Silk Road tours: The Mongol control of the Silk Road northern land route to Central Asia gave the them a major source of wealth. It is still a popular travel route for sightseeing. We offer a number of customizable itineraries.

We specialize in custom-making China tours to suit your interests, time frame, and budget. If you can't see exactly what you want, you can customize your tour or use our tailor-made service.