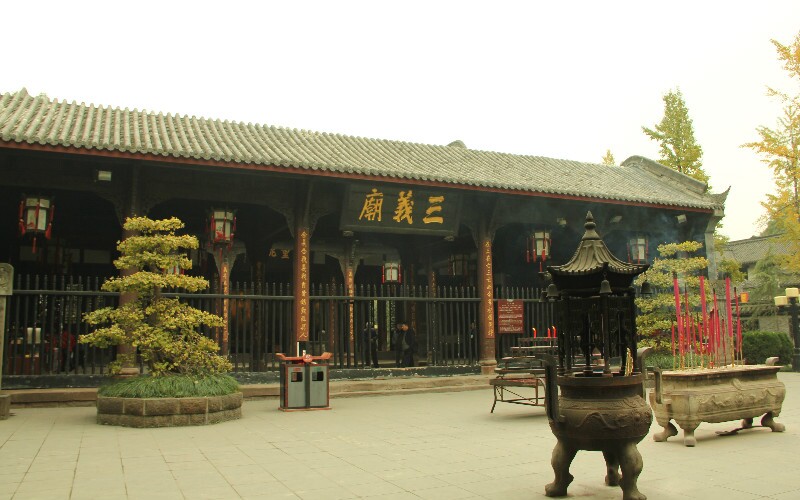 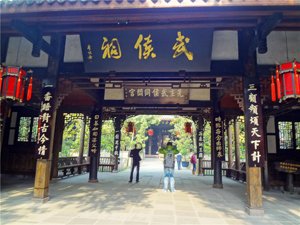 The Wuhou Temple is built to memorize Zhuge Liang, the distinguished statesman and strategist during the Three Kingdom Period.

Like Quan Yu and Cao Cao, Zhuge Liang is famous in China's history. He was one of the key rulers in the kingdom of Shu Han that was founded by Liu Bei when the Eastern Han Empire (AD 25-220) fell in 220.

He had the responsibility for plotting strategy in the dangerous era on behalf of Liu Bei and his son. He was known to be very clever in war and was also known as an inventor, though a lot of his purported inventions may be simply myths or fictional stories such as the stone maze that the fictional novel The Romance of the Three Kingdoms describes.

As the Han Empire disintegrated, he plotted strategy to make Shu Han a kingdom that survived for 43 years against stronger enemies.

The best place to learn the life of Zhu Ge Liang is Chengdu, the capital of the Suhan State, which Zhu Ge liang served most of his lifetime. The Wuhou Temple in Chengdu is dedicated to Zhu Ge Liang.

He was born in a turbulent time in 181 in Shandong Province. After he was born, a large-scale rebellion of the Yellow Turbans and the Five Pecks of Rice army ravaged the country. Then, when he was 14, Cao Cao invaded Shandong. His family was forced to flee.

This was a time of natural disasters, regional conflicts, and political crisis. There were frequent assassinations and open conflicts between rival ruling groups of the dynastic court. In Hubei, he farmed during the day and studied at night. It is said that he developed friendships with the local educated people.

In 207, he met Liu Bei. Liu Bei's base of power was in the region of the southwest around Sichuan. They were threatened by Cao Cao who held a large area north of the Yangtze River. Liu Bei and Zhuge Liang planned an alliance between Liu Bei and a ruler named Sun Quan who controlled a lot of territory in the southeast. In 208, at the Battle of Red Cliffs, the allied armies of Liu Bei and Sun Quan defeated Cao Cao's army.

Due to this victory, both of the southern regions became kingdoms when the Eastern Han Dynasty ended. In the year 220, the empire was divided between the three rival regional leaders. Cao Cao (155–220 CE) controlled the area north of the Yangtze River; Liu Bei (161-223) controlled an inland area including Sichuan in the southwest; and Sun Quan (182-252) controlled the southeast.

The north was called Cao Wei (曹魏), the southwest was called Shu Han (蜀漢), and the southeast was called Dong Wu (東吳) that means Eastern Wu. The Han Empire broke into three economic geographical regions that were separated by the natural boundaries of the Yangtze River and the central mountains where the Three Gorges are. It is said that Zhuge Liang understood the geographical division of the region.

In the southwest, the Shu Han had a small population of only a million people. But they had a natural defensive stronghold because travel by boat going upriver past the Three Gorges area was difficult. The river's passage could be defended against invading armies. Their territory was also very fertile. However, the other states were bigger and more populous. Dong Wu had about twice the population, and Cao Wei had four times their population.

In 221, Liu Bei in Shu Han named himself the Emperor of the Han Empire. In the same year, Sun Quan took the title of the King of Wu. Liu Bei declared war on Dong Wu. At the Battle of Yiling, Liu Bei was defeated by Sun Quan's army, and he was forced to retreat back to Shu Han where he died.

After the death of Liu Bei, Liu Bei's son Liu Shan took power in Shu Han. Zhuge Liang became the Prime Minister under Liu Bei. They made peace with Sun Quan. This stabilized the political situation between them. In order to make sure that the Nanmen people who lived in the south would not attack them, Zhuge Liang and Liu Shan fought the Nanmen. Once they surrendered, they added Nanmen to their army. Shu Han was then prepared to attack northwards.

In 227, Zhuge Liang sent an army against Cao Wei even though Wei had a much bigger population. His five campaigns failed, and in 234, he led his last northern offensive. During the campaign, he died of an illness at the age of 54.

Romance of the Three Kingdoms

The Romance of the Three Kingdoms is a popular fictional novel that is said to be written by Luo Guan Zhong at the end of the Yuan Dynasty period (1279-1368). This novel is one of China's four greatest classic novels. Zhuge Liang's character has a prominent role in the book as does Liu Bei and his adversary Cao Cao.

In the novel, Zhuge Liang is portrayed as accomplishing exceptionally clever stratagems to stymie or defeat his adversaries. He also has magical powers. For example, in the part of the book about a stone maze, Liu Bei fled his pursuer named Lu Xun.

Lu Xun finds scattered piles of stones that Zhuge Liang had constructed there as a trap. When he goes in, there are freakish natural phenomena, and he can't get out. Then an old man appears and leads him out.