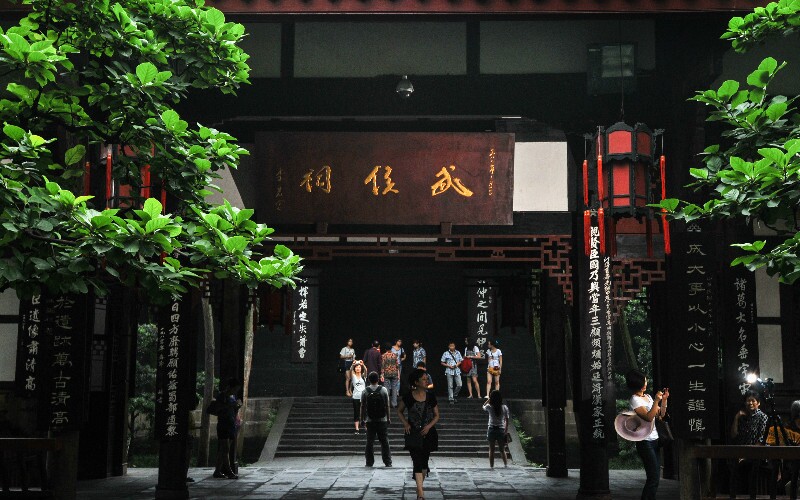 The Wuhou Temple (The Temple of Marquis Wu) in Chengdu's south suburb is the most famous and influential of the temples. It is named after Zhuge Liang, who lived from 181 until 234 AD.

He is one of China's famous historic figures, and he was a renowned minister and military strategist for Emperor Liu Bei (161-223) of the Shu Kingdom during the Three Kingdoms period in China. The temple is also dedicated to Emperor Liu Bei.

It was built during the Qing dynasty in 1672. Because Zhuge Liang was granted the title of "Wuxiang Hou" (Marquis Wuxiang) in his lifetime, this temple is known as the Wuhou Memorial Temple. The temple is one of Chengdu's major attractions and contains numerous statues to Emperor Liu Bei, Zhuge Liang and other officials of the Shu Kingdom, and there are ancient inscriptions and tablets that are famous in China.

The temple is located in the southern suburb of Chengdu. Chengdu is the capital of Sichuan Province.;

To appreciate this temple complex, you need to know some about its history. During the Three Kingdoms period of China from the year 220 until 280, China was divided into three empires that were warring to conquer each other: the Wu, Wei and Shu Kingdoms.

The area around the ancient city of Chengdu was a part of the Kingdom of Shu. Liu Bei was the Shu Kingdom's first emperor, and he needed Zhuge Liange to help him govern. The Shu Kingdom was finally defeated.

But several hundred years later, a very famous poet named Dufu (712-770) of the Tang dynasty wrote a poem in which he said that Zhuge Liang's shrine was in a glade of cypress trees. But the shrine's location isn't known.

Features of the Temple

The memorial in large and is a nice place to wander around it. It covers 37,000 square meters of paths and woods. The temple complex is interesting architecturally and steeped in history, and the park has old cypress trees.

The main body of the temple is simple in style, but dignified. It is divided into five sections, running south to north: the Gate, the Second Gate, the Hall of Liu Bei, the Corridor, and the Wuhou Temple (the Hall of Zhuge Liang). Inside, clay sculptures of the Shu Emperor and his ministers stand together. There are 47 statues of Liu Bei, Zhuge Liang, and other officials of the Kingdom.

The temple houses many inscribed stone tablets. Many of the sayings and poems written on these tablets are well known. The most valuable and famous tablet was set up in 805 AD. It is 144 inches high and 37 inches wide. It is called the Tablet of Triple Success. It is called this because the text was originally penned by a famous official named Pei Du, then stylized by Liu Gongchuo who was one of China's most famous calligraphers, and then his calligraphy was carved in the tablet by a noted engraver named Lu Jian. It is some of China's finest ancient literature and craftsmanship.

Getting There: Take Metro Line 3 and get off at Gaoshengqiao. And then walk eastwards along Wuhouci Avenue for 3-5 minutes to find the temple.