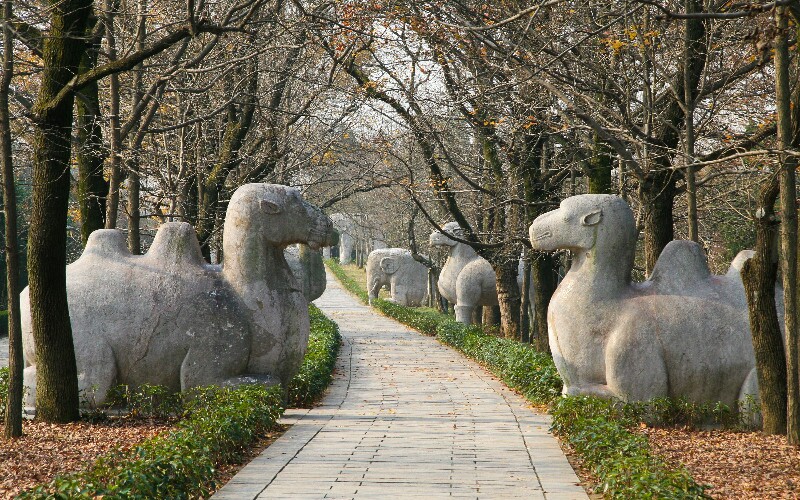 Zhu Yuanzhang, also known as Emperor Hongwu (ruled 1368–1398), was the founder of the Ming Dynasty (1368–1644). He was born a peasant, becamea monk,then a rebel leader, and finally became the first emperor of a new dynasty.

Zhu Yuanzhang grew up as a peasant. He was born in 1328. It is said that he was the youngest of seven or eight brothers. Due to poverty, several of his brothers were given away.

In 1344, when he was 16, the Yellow River flooded his home. Then his family died of disease.

He took shelter in a Buddhist monastery that also ran out of money, and he was forced to leave and beg for food. But he returned to the monastery when he was 24, and he learned to read and write there. Then the monastery where he took refuge was destroyed by Yuan troops.

Zhu Yuanzhang first joined a local rebel group. Then they joined a larger Red Turban army that had Zoroastrian and Buddhist beliefs. Zoroastrianism was a Western religion that had spread through Central Asia before Islam spread.

He then became the leader of the large Red Turban rebel army before he was 30.

In 1356, Zhu’s army conquered Nanjing. This was an important city that was strategically located so that he could control part of the Yangtze River and the region south of it. He made Nanjing his capital.

Over the next 10 years, he defeated all the other powerful rival armies. In 1368, he attacked the Yuan empire capital of Dadu (Beijing) and gained control of it. The Yuan court fled northwards, but the Yunnan area remained under Yuan rule until 1380.

During his 30-year reign, Zhu Yuanzhang instituted major policy initiatives. Some of his policies became permanent Ming policies, and he reversed some of his own policies when he was old.

To suppress the merchants and prevent pirate attacks, Zhu decreed a maritime embargo policy during his reign.

He wanted to make sure that eunuchs had no ruling power because eunuchs had become involved in internal politics and were responsible for a lot of the court’s decadence.

To limit their power and ensure the centralization of authority, eunuchs were not allowed to engage in official affairs and had to be illiterate.

Emperor Hongwu staffed his bureaucracy with officials who passed the Neo-Confucian imperial examinations. These officials were dependent on the court for their position so that they might prove to be more loyal. They were generally very intelligent and well educated.

After Zhu Yuanzhang emerged as the rebel general, he became more and more suspicious. He set up a private guard military institution, which was known as the Embroidered Uniform Guard. It served as Zhu’s secret police to help him spy on his subjects.

Emperor Hongwu also issued paper currency. But he was ill grounded in economy and it is said that he handed out too much paper money during his lifetime causing inflation.

Hongwu grew up as a peasant, and maybe he championed their plight since he knew firsthand that they were often reduced to slavery and starvation by the rich and the officials.

He instituted public work projects and he tried to distribute land to the peasants. During the middle part of his reign, Hongwu made an edict that those who brought fallow land under cultivation could keep it as their property without being taxed.

By the end of his reign, cultivated land had increased substantially. The peasants prospered because they sold their produce to the growing cities. During his reign, the population increased quickly.

Emperor Hongwu grew up as a peasant and he knew only too well that peasants were often reduced to slavery and exploitation by the rich and officials.

He tried to weaken the merchant class and to force them to pay high taxes, and he even relocated a number of them. In 1371, Emperor Hongwu issued a sea ban policy.

The End of His Reign

It is said that in 1380, a thunderbolt hit his palace, and he stopped the killings and massacres for some time because he was afraid that Heaven would punish him.

He reigned for 30 years and died when he was 70. When he died, his physicians and concubines were put to death on his instructions.