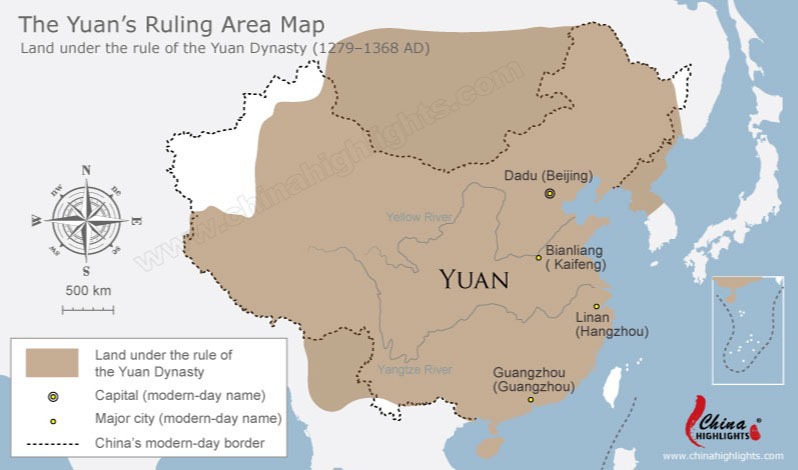 Founded by Kublai Khan, leader of the Mongolian Borjigin clan, the Yuan Dynasty era lasted for 97 years, from 1271 to 1368. The Yuan Dynasty was China's first foreign-led dynasty, in between the Chinese Song and Ming dynasties.

Facts about the Yuan Dynasty

The Mongol Empire — Foundation of the Yuan Dynasty

In 1206, Genghis Khan united the Mongol tribes and established the Mongol Empire, and then began to conquer the Western Xia, Jin, and Liao in today’s northern China. With two large westward expeditions by his successors, the Mongol Empire had already occupied vast swathes of the Eurasian continent, including north China, northeast China, Tibet, China’s current western region, Central Asia, West Asia, and Eastern Europe by 1259.

The Establishment of Yuan Dynasty

The Yuan Dynasty came from Mongolia.

In 1259, the Mongol ruler Möngke Khan suddenly died while attacking the Southern Song.

In 1260, his two younger brothers, Kublai Khan and Ariq Böke fought a four-year civil war for dominion, and finally, Kublai Khan won. This caused a division in the Mongol Empire.

Because Kublai Khan appointed Han people to govern and promoted Han law, he displeased most of the Mongolian nobles.

In 1271, Kublai Khan established the Yuan Dynasty in the north of China, which coexisted with the Southern Song Dynasty (1127–1279) for eight years. At that time the Mongol Empire was divided into the Yuan Dynasty territory and four other khanates in central and western Asia.

After Kublai Khan took the throne, he continued to launch attacks against the Southern Song. Finally, the Southern Song was destroyed in 1279, and the Yuan Dynasty unified Central Plains with China’s then southern territory.

The Yuan Dynasty ended more than 300 years of division and reunified China. The unification made Yuan Dynasty economic prosperity and strengthened the process of national integration. Many achievements were made especial in technology and culture.

Yuan drama and novels developed. The Romance of the Three Kingdoms and Water Margin (two of the four Chinese literature classics) were written during the Yuan Dynasty.

Islam further developed in China. The number of Muslims surged during the Yuan Dynasty. Due to the westward conquests and increased connectivity of the Mongolia Empire, a large number of Persians and Arabs came to China. Muslim administrators and merchants took local wives and brought up their descendants as Muslims.

Literati painting flourished. Literati expressed their feelings of anger against national oppression or corrupt politics in their landscape paintings and flower and tree paintings.

The Yuan Dynasty adopted the provincial system, which developed in the Ming and Qing Dynasties, and finally influenced the administrative system of modern China. The Yuan Dynasty set up 10 provinces throughout the country governed by a central authority.

Shipping in the Yuan Dynasty era was well developed. Quanzhou Port, along with Alexandria in Egypt at that time, was one of the world's two largest commercial ports. The number of trading countries increased from 60 in the Song Dynasty to more than 140.

The Fall of the Yuan Dynasty — Why it Happened

In order to make the regime more stable, the Yuan rulers constantly tried to launch wars of aggression against neighboring countries.

The costly wars and great defeats were financed largely with Yuan paper money and, to reinforce their monetary control, they outlawed the use of gold and silver as currency.

Faced with the devaluation of paper money to the level of waste paper, the Yuan government nevertheless continued to force people to use their paper money. The tax burden on the people was also increased by more than 20 times to meet financial expenses!

In 1341, the bubonic plague pandemic known as the Black Death began to sweep the empire. The epidemic ravaged the empire and millions of people died in Hebei Province alone.

In 1344, the Yellow River shifted its course (yet again). This caused a massive flood that impoverished an important and populous region at the center of the empire. The river had flooded on two other occasions during the previous couple of decades.

The Resistance of the Han — Zhu Yuanzhang

Mongol rulers established a class structure with Genghis Khan's clan at the top, Mongols next, Muslims and other foreigners who were installed in official positions next, and the Han people at the bottom.

In the face of unequal treatment, heavy taxes, famines, and the government’s incompetence and cruelty, in 1351, a rebellion started called the Red Turban Rebellion.

Between 1356 and 1367, an important leader of the Red Turban Rebellion, Zhu Yuanzhang, defeated all the other powerful rival armies. In 1368, he attacked the Yuan empire capital of Dadu (Beijing) and gained control of it, and the Yuan court fled northwards.

1. Who was the first emperor of the Yuan Dynasty, and who was the last?

Kublai Khan was the first emperor of Yuan Dynasty and also the most remembered one. The Yuan Dynasty has 15 emperors. The last emperor was Emperor Shundi. The Red Turban Rebellion broke out during his reign (1333–68).

2. What happened to the Yuan Dynasty after it was defeated by Zhu Yuanzhang?

After being defeated by Zhu Yuanzhang, the Yuan royal family retreated to the Mongol grasslands and formed a nomadic regime called the Northern Yuan, coexisting with the Ming Dynasty. In 1402, they changed its name to Mongolia.

3. What was the Yuan Dynasty’s religion?

The religious environment of the Yuan Dynasty era was very tolerant. Although Tibetan Buddhism was their main religion, Islam, Daoism, Christianity, and Judaism all developed in China during the era.

Inner Mongolian tours: The capital of the Yuan Dynasty was in Inner Mongolia before it moved its capital to Beijing.

Beijing tours: Beijing (then called Dadu —'Big Capital') was the capital of the Yuan Dynasty and has continued to be China's capital for most of the following 800 years. Discover the enduring charm of the 'big capital' with China Highlights.

Silk Road tours: Their control of the Silk Road's northern land route to Central Asia gave the Mongols a major source of income and manpower. It is still a popular travel route for sightseeing. We offer a number of packages that highlight the sights along the historic land route.