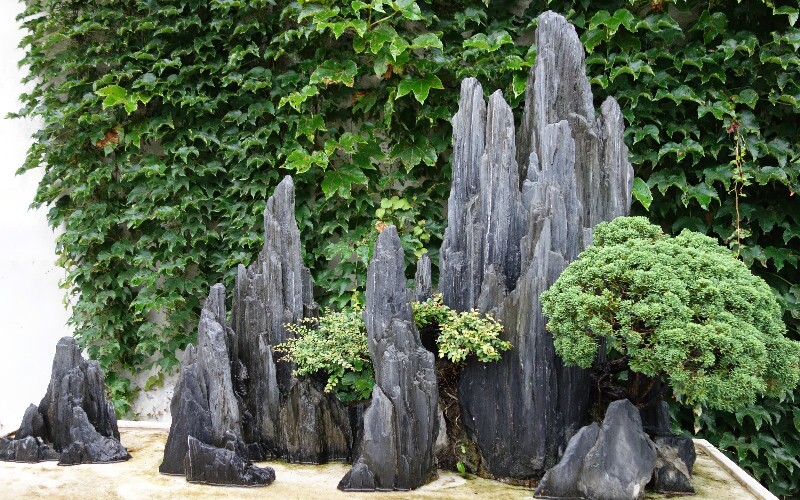 What is a Bonsai?

Beautiful bonsai of a banyan tree

Chinese Bonsai is the art of designing a miniature tree in a shallow pot or container. Bonsai (which translates to 'tree in a pot') is also known as 'pun-sai' and 'penjing' (the word 'Pen' means container or pot and the word 'jing' means scenery). Chinese Bonsai, inspired by nature, originated in China around 1300 years ago. Originally Bonsai was practiced only by the elite of ancient China. The miniatures trees were considered a luxury and were given as gifts. Around 1100 AD Buddhist monks brought the Bonsai to Japan and the art was adopted by the Japanese. It was not until the early 1900’s that Bonsai spread to the rest of the world.

Bonsai is often viewed as an object for meditation. The designing of the Bonsai tree is contemplative, a Zen practice. Chinese style meditation encourages liberation of the mind; encouraging it to flow in its own natural way. Creating Bonsai, arranging rocks in the miniature landscape, clipping and the adding of new elements is a process of active meditation. Something new may be discovered, and having flowed naturally out of the mind it is harmonious and lifts the spirit.

The purpose of Bonsai is not just to re-create nature in a pot, but to actually capture the spirit. The Chinese see the universe as having two sides of cosmic energy; this is called the yin and the yang. In a Bonsai tree, this is depicted through drama, rhythm and balance. Overall unity is important, therefore, many considerations have to be made. These include the type of container, the placement of the Bonsai tree, the species of the tree, the size, shape and color of the tree as well as other details such as the rocks which also have to be chosen just so.

Famous Bonsai producers in China include the Shanghai Botanic Gardens whose mission is preventing plant extinction and educating people. With over 150 Bonsai gardens, Suzhou is believed to have the loveliest Bonsai gardens in China. One of Suzhou’s many gardens, the Humble Administrators Garden, is listed as a World Heritage Site. The Hangzhou Flower Nursery in Zhejiang is famous for its two-and-a-half acre Bonsai garden that includes 3,500 Bonsai plants.

Bonsais are usually viewed alone, meaning there are no other plants, decorations or clutter near them. Many homes in China have a special place (shelf, table or alcove) in which they display their Bonsai. A Bonsai can be displayed with an object that compliments it, however, something like a painting or a scroll that is hung at a higher viewpoint. A well-chosen rock can set a mood, a stand set up just for the Bonsai can make a strong statement and accent plants, such as grasses, can act like a bamboo grove. Viewing platforms are often changed with the season for different scenes.

Bonsai plants need regular care just like other plants. Watering, fertilizing, trimming and the occasional re-potting (every three years or when the roots are bound) will ensure that the Bonsai is healthy and lives long. The art of Bonsai takes patience and diligence but with proper care, a Bonsai will repay the owner many times over.