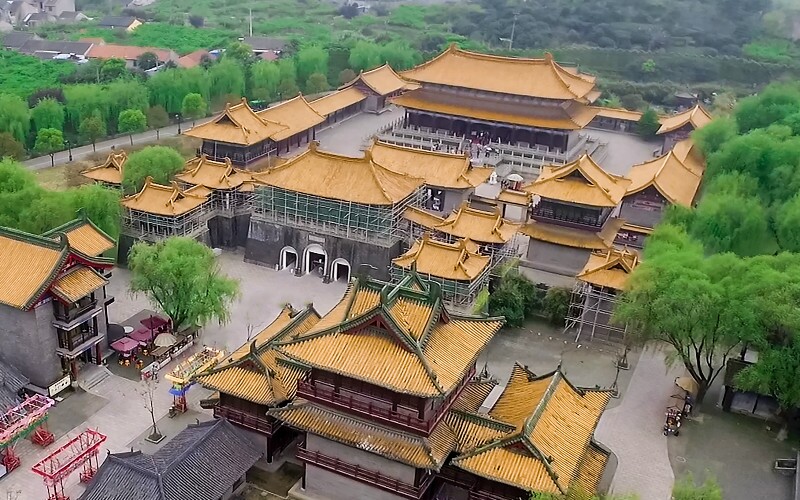 The Three Kingdom City was built as background by the CCTV for shooting the TV series of Romance of Three Kingdoms. It is a recreation of the panorama of the chaotic Three Kingdoms Period in Chinese history.

Covering an area of 35 hectares, there are large-scale numerous Han-style buildings in the city, including King Wu Palace, Nectar Temple, water village of Cao Camp, seven star altar, signal fire platform, wheel-tower gate (outer gate of government official) and more than 20 ancient warships  Moreover, the scene of "Oath of Brotherhood in the Peach Garden", arena, the Eight-Diagram Formation are added and entertainment items such as borrowing arrows with straw boats, amusement on ancient boats, bathing place at the shore of the lake, horse racing, singing and dancing performances newly developed in the scenic area.

The whole scenic area of Three Kingdoms City shows a majestic and spectacular vision and has profound connotations. When you walk around the city, every wheel-tower gate and every brick are as if telling one thrilling story after another in troubled times to the tourists. The Three Kingdoms City is a double-dwelling city which centers on the production of television and film and also pays attention to the tourist function, thus attracting multitudes of tourists to the scenic area.

Geographical Location:It is located in the southwest suburbs of Wuxi City.

How to get there:Take bus Route 820 directly to the scenic area.

Recommended time for a visit：One day