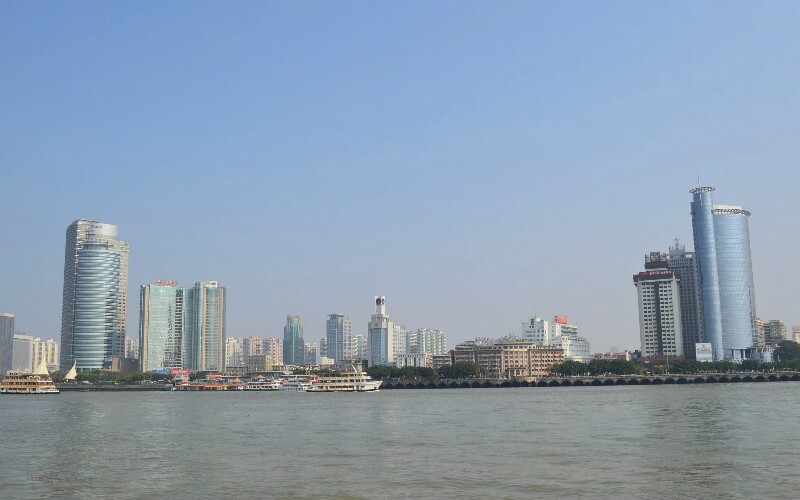 Kinmen, pronounced “Jīnmén” in Chinese Mandarin and meaning 'Golden Gate' was first named in 1387 by a Ming dynasty Emperor to reflect its importance as strategic point. This island protected the key Chinese port of Xiamen City, and was militarised in the late 1300s against pirate attacks.

Progressing through the centuries, the Islands of Kinmen have changed hands, firstly from Ming to Qing dynasties (1663), then later falling to occupation by Japan in the Second Sino-Japanese war of 1337. Following their liberation by Chinese national forces in 1945, the Chinese Civil War erupted and the island has since be claimed by both China and Taiwan since their separation in 1949.

The island is currently controlled by the Taiwan government since failed assaults by mainland PLA forces in 1954-1955 and 1958. Tensions have fortunately since cooled and the Islands of Kinmen are once again a popular gateway to "Taiwan" via ferry and prime sightseeing areas.

The unique and often beautifully painted Wind Lion Gods of Kinmen are quite something to behold, and the chances are you’ll stumble into more than one by chance. These white granite statues are dotted around the ancient villages of Kinmen and were traditionally created in the hopes of bringing good luck, fertility and other benefits to the Kinmen villagers.

Often marked on guide maps, locating these colorful creatures can be a great way to hike around the island. Alternatively if pressed for time, you can simply visit the new Wind Lion God Park located near the ShangYi Airport where all 63 official statues have been recreated for easy viewing.

Additionally, if you can find every original Wind Lion God on the island and bring photo proof to the park they’ll happily give you a reward for your efforts…

Leisurely wandering along one of Kinmen’s many beaches can be the best part of visiting the naturally blessed archipelago. The fine sands and verdant local forests blend richly with the crumbling military fortifications to provide a brilliant backdrop when enjoying the beach.

This small but excellent museum is located in the scenic Zhongzheng park of Jinhu. The relatively well-translated exhibits recreate the atmosphere of the intense period of conflict between the Nationalist and Communist forces in the 1950s, making the museum a must see for any historian.

Additionally there is also a Virtual War facility within the museum where you can more fully experience the war atmosphere over three minute screenings.

In a similar military vein, any history enthusiast should definitely check out the Zhaishan Navy Tunnels. Blasted from the granite bedrock of Kinmen in the 1960s, these extensive tunnels stretch over 357m and were designed to shelter the ROC (Taiwanese) ships from mainland artillery fire during the civil war.

These impressive structures stretch from deep within the island all the way to the sea, and are certainly worth a visit. Serious enthusiasts should also view the Siwei tunnel on Lesser Kinmen; at 790m long this structure dwarfs the more local Zhaishan tunnels, though a ferry is required from Shuitou port to get to the official tunnel entrance.

A beautifully restored example of Fujian traditional Chinese architecture, Kinmen Cultural Village is a great place to while away an afternoon. The colourful village contains around twenty well-preserved traditional houses, boasting detailed decorations and furniture of the time; ideal for DIY exploration. In addition to this, the village also hosts multiple cheap and tasty restaurants, quaint cafés and two of Kinmen’s most acclaimed antique stores for the souvenir hunter. All this, while maintaining a surprisingly peaceful and commerce-free atmosphere.

This elegant stone tower, rising from a collection of traditional buildings, was previously the highest building in Kinmen. Originally built to fend off raiding pirates, the tower and surrounding architecture is a curious mix of eastern and western styles.

The towers original architects were Chinese merchants who had succeeded overseas and as a consequence, included western nuances to show off their wealth and experience. A free local museum and souvenir shop are also highly rated by visitors making the tower complex one of Kinmens better attractions.

A beautiful and relaxing park area with the hidden treasure of an underground howitzer base dug deep into the bedrock of the island. Artistically lit twisting tunnels contrast with huge steel artillery pieces, well preserved equipment and a dedicated museum (獅山炮陳地). Lion Mountain is definitely worth a visit for the historian, sightseer or traveler simply looking to unwind somewhere tranquil.

An iconic traditional tower, boasting twin cannons and housing a cultural museum telling the turbulent story of Kinmen’s history. The three-story structure offers great views from the upper balcony and an interesting account of the challenges faced by the disputed territory.

A good quality museum dedicated to retelling the battle of 1949. The exhibits include many war paintings in addition to preserved military machines of the time such as tanks and armored transports.

While in the area, the local villages of Nanshan and Beishan(南山/北山) are worth a quick visit. A cursory venture can find a surprising number of buildings still bearing the signs of war, with bullet holes or shrapnel markings.

A thankfully obsolete relic of the Chinese Civil War, this imposing structure is now open to the public during daylight hours.

The three-sided building is painted in the war camouflage of the time and flanked by up to ten M41 Walker Bulldog tanks, in excellent condition. The alignment of the tanks, with six units aimed north-west out to the sea, serve as symbolic display of defiance to the communist mainland and an enduring reminder of the conflict, now six decades past.

Large flocks of migratory birds are common in the Kinmen winter, nesting in many of the natural water bodies throughout the islands. Birdwatching enthusiasts and hikers should check out the Shuangli Wetlands for beautiful scenery and abundant wildlife. Information on the migratory species and the Kinmen environment is available on site.

Via Bus - Buses are available at all major towns and many villages, they are however infrequent, so other transport in recommended.

Via Taxi - Taxis are common in the city center and most towns, but may take a while to find elsewhere. A taxi from Shuitou port on arrival should cost you 250 NT$ to Jincheng city center and 200 NT$ on the return journey.

Via Bicycle or Scooter - By far the most recommend option. Renting a moped is a cheap (~NT$550/day) and fun way to see the island with no restrictions on where you can go and when. Scooter hire is available at Shang Yi airport and in many of Greater Kinmen’s towns, bicycle hire is common throughout the islands.

Delicious street food and cheap snack shops are everywhere in downtown Kincheng. Favorites include fried chicken cutlets and oyster balls in addition to peanut candy (貢糖), a popular local snack and souvenir which comes in many flavors.

Kaoliang liquor (高粱酒), a strong spirit similar to Chinese baiju and not for the faint of heart! This potent brew comes in concentrations of 38-58% and is unique to Kinmen. Definitely worth a sip before leaving the island and (if palatable), souvenir bottles can be found all over Greater Kinmen.

The Kinmen Islands are also famous for their steel cleavers, which are traditionally of excellent quality. Rumored to still be forged from the abundant source of artillery shells fired into the beaches in the 1950s, these steel knives are iconic of Kinmen and make a great piece of memorabilia.

Cleaver quality has unfortunately somewhat decreased in recent years (perhaps due to a waning supply of ordinance), however a few knife-forgers are still living up to the practice. Most popular among these is Maestro Wu’s Knives; a quality manufacturer offering tours of the forging process at the island factory.

A trip to the scenic Kinmen Islands fits in perfectly with a Xiamen tour.

To arrange a personalized tour of the Kinmen Islands, tailored to your travel interests, please see our China Highlights trip customization webpage.

xiamen How to Plan a 5-Day Xiamen Tour

xiamen 10 Top Things to Do in Xiamen