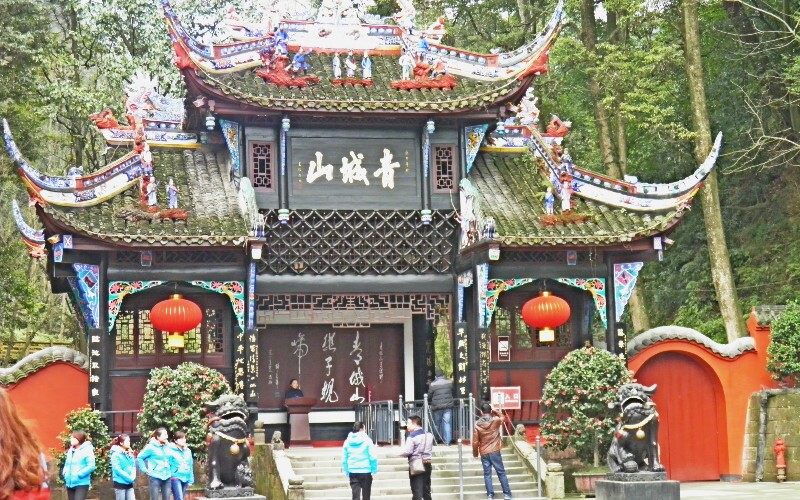 Mount Qingcheng is a famous Taoist mountain, one of the places where Taoism originated. The mountain became UNESCO World Heritage List in 2000, and featured in the Kung Fu Panda movies of 2011 and 2016.

The Qingcheng Range — The "Wall of Hills" Protecting Panda Valley

The Mount Qingcheng range towers above the Chengdu Plain, and the Min River flows down one of its slopes, creating a scenic area that covers 200 square kilometers.

The mountain range has 36 peaks, and its tallest peak is Laoxiao Ding, at an elevation of 1,260 meters above sea level. The peaks stand in a circle like an ancient wall protecting a city. Trees grow luxuriantly on the mountains, creating greenery all year round, and giving it the name Qingcheng Shan — ‘green city wall mountains’.

Mount Qingcheng has a beautiful peak near the city, and another notable peak sits behind it. These peaks are called "Front Mountain" and "Back Mountain".

Front Mountain has long been a major travel highlight in the Chengdu area because of its numerous ancient Taoist and Buddhist temples and historic sites. It was once a religious pilgrimage destination, and the scenery is beautiful.

Fifteen kilometers behind Front Mountain is Back Mountain, which the government recently opened for hikers. A few temples and historical sites are there, but it is mainly a nature reserve with peaceful streams, quiet forests, and a grand peak.

Access: Tourists can take buses or taxis from Front Mountain to Back Mountain. Hiking up the mountain takes about four hours, and hiking down takes about three hours.

Mount Qingcheng is a famous Taoist mountain because it is one of the places where the Taoist religion originated. A Taoist teacher named Zhang came to the mountain and preached during the Eastern Han Dynasty period (25–220).

Since then, over the last two millennia, dozens of other temples were built on the mountain.

Tianshi Cave is one of the main attractions since it is where Zhang is said to have preached.

The sunrise, the misty "sea of clouds", and the Shengdeng are beautiful sights.

If you are walking up the mountain, Jianfugong Temple, which is under Zhangren Peak, is a major highlight and the starting point for a tour of the mountain.

The temple was first built during the Tang Dynasty, about the year 730 AD, and it has been repaired and rebuilt many times since. Now, only two temples and three courtyards exist. One of the temples has three different areas for Taoist teachers and gods.

Yuanyun Pavilion and a clear brook are in front of the temple. Behind it are scenic sights such as Chicheng Rock, Ruquan Spring, Shuixin Pavilion and Dressing Table.

There is also a famous couplet about the temple written during the Qing Dynasty (1644–1912) that has 394 Chinese characters.

The surrounding grey-green forest provides refreshing shade while walking in the area.

Shangqinggong Temple is one of the most famous Taoist temples, and it sits near the top of Mount Qingcheng. A structure was first built during the Jin Dynasty (265–420), while the existing temple was completed during the reign of the Tongzhi Emperor (1856–75) of the Qing Dynasty.

The main buildings are the gate, the main temple where Taishanglaojun is enshrined, a side hall, and the Yuhuang building. The main temple houses an image of Taishanglaojun, and treasured wood boards are carved with the full texts of the Taoist classic of The Virtue of the Tao and Huangdi Yinfujing.

Behind Shanqinggong Temple are steps that go up 100 meters to the top of Mount Qingcheng, where a covered observation platform allows visitors to see the sunrise and the clouds. If you are there at night, you can see the stars. The area is beautiful when it rains and when it snows in winter.

The Inspiration for the Kung Fu Panda Movies

However, Kung Fu Panda 2 is a 3D movie, which required more detail than 2D Kung Fu Panda 1. So DreamWorks staff came all the way to China to make the movie more authentic. The gate of Mount Qingcheng was stealthily grafted in the Valley of Peace.

And also in Kung Fu Panda 3, when Po reunites with his biological father Li Shan and his fellow pandas, we see Panda Village, which hides in the Qingcheng Mountains like a utopia.

The producers of Kung Fu Panda 3 came to Mount Qingcheng in order to envisage the scenes of native panda habitat in the movie. Even the moss on the roof is inspired by what DreamWorks staff saw at Mount Qingcheng.

Do you want to explore the picturesque "Panda Village" — a real village on Mount Qingcheng that inspired the Kung Fu Panda animation? See our popular Chengdu itineraries for inspiration:

Not what you are looking for? We are more than happy to create a tour for you based on your interests and requirements.