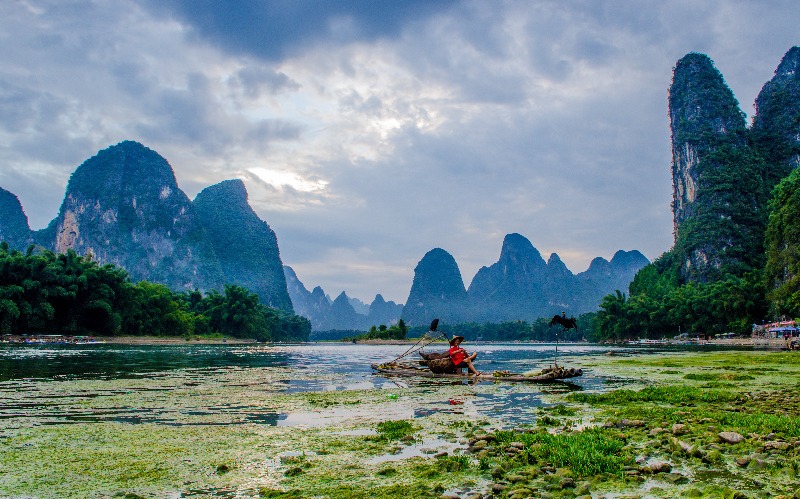 Yangshuo Railway Station was officially opened to the public on January 24, 2016. It only serves high-speed trains, and is a small intermediate station on the Guangzhou-Guiyang high-speed rail line.

The station is located among the hills 6 km (4 miles) east of Xingping Town, not in Yangshuo town.

The small ancient town of Xingping has a history of 1,700 years. Settled on the banks of the world-known Li River, Xingping boasts the most beautiful section of the Li River, and its scenery is printed on the back of 20 yuan banknote. Nearby attractions worth visiting also include Nine Horse Fresco Hill and Yellow Cloth Shoal.

The station is about 34 km (21 miles) from Yangshuo town center (i.e. West Street), so it's convenient for Xingping, but not for West Street.

Yangshuo Railway Station covers an area of 10,000 square meters, and can serve up to 1,500 passengers at one time. The waiting hall is on the second floor, with 1,200 seats. Its VIP waiting lounge has a separate (nicer) washroom.

There are 10 ticket windows at the station, and 5 automatic ticket machines.

17 trains a day stop at Yangshuo Station. Most are on the Guangzhou-Guiyang HSR Line, but some come from Nanning, through Liuzhou and Guilin.

The best trains for Yangshuo Station from Guilin leave from the inconveniently located Guilin North and Guilin West stations, about 40 or 50 minutes respectively from the city center.

From Guiyang and the Minority Townships

If you are touring Guizhou and its minority areas you may want to go direct to Yangshuo Station...

The traditional route from Yunnan (Lijiang, Kunming, etc.) to Guilin required a train change in Nanning following an all-night train from Kunming. If you are following this route you may like to know you can now go direct to Yangshuo Station from Nanning, missing out Guilin. (The Kunming–Guiyang–Guilin route is now quicker, though, since the Gui–Guang HSR opened.)

The bus journey from Yangshuo Station (Xingping) to Yangshuo town takes about an hour (20 yuan), and still requires 15 minutes in a golf cart to get to West Street from the "Yangshuo-to-Xingping Bus Station". So, if you want to go to Xingping, the bullet train is a good option, but to go to Yangshuo town a 1½-hour bus is still the best option from Guilin City center.

Many cities, like Guilin, have more than one station. Be sure you're booking the right tickets. You could book tickets at any train station, city ticket window, or online with the Chinese railway website. See How to Buy Tickets in China.