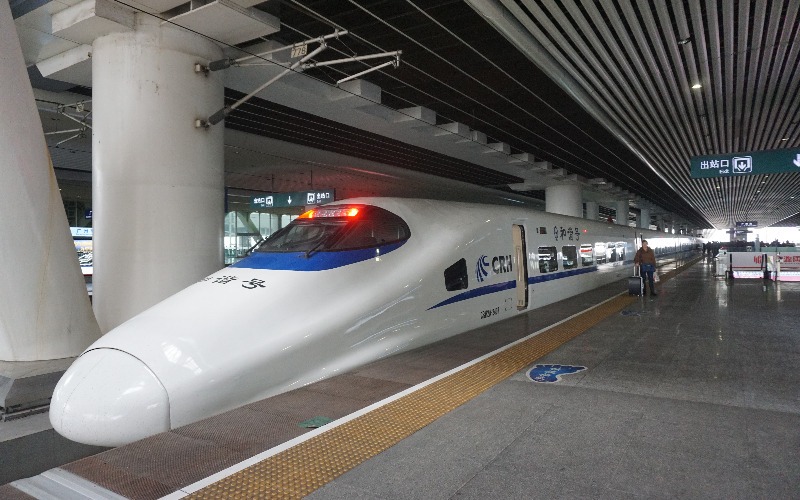 The Guangzhou South Station is a busy high speed train station that tourists and travelers can use to reach key places in China. It is one of the six biggest bullet train hubs in the country and useful for long distance travel to key places in China and for travel around southern Guangzhou.

It is useful for tourists and business people to travel quickly to and from the Futian financial district in Shenzhen to places in southern Guangzhou such as the Canton Trade Fair and Chimelong Resorts. It is also useful going to popular tourist places such as Macau, Beijing, Shanghai, Xi'an, and Guilin/Yangshuo.

But not as central: The problem with Guangzhou South however is that it takes longer to reach it from central Guangzhou where most tourists and business people want to go.

These popular train travel routes from Guangzhou South will give you some travel ideas for planning trips around China:

G-class bullet train such as the ones to Beijing, Shanghai, Guilin, and Shenzhen

Efficient between Guangzhou and Beijing: Considering the speed, convenience, sightseeing, flexibility, and ticket prices, taking the bullet train to Beijing can be the most efficient, enjoyable, and comfortable way for a tourist to go. If you miss your train, you can simply wait for the next train. So there is less stress about being on time.

Tour: We can do the travel planning and transportation arrangements to Guilin for you. Our company is based here. See Guilin and Yangshuo in 4-days>>

Guangzhou South – Macau: Here is quick way to get from Guangzhou to Macau and Zhuhai and for going to/from Chimelong Resort or the Canton Fair from there.

Fast and cheap: D trains get to the Gongbei Border Crossing in about 80 minutes. The Zhuhai Railway Station is at the Zhuhai Gongbei Port. Once there, follow the sign boards and crowds and walk to the Macau crossing building. Unless it is crowded, crossing takes only a few minutes. Have your passports ready. On the other side, you'll find both free hotel shuttles that will take you all over and a large underground public bus station. Bus 5 goes to the Senado Plaza.

Frequent: There are about 38 daily D-series trains leaving for Zhuhai every 25 minutes from 6:30 to 22:45. The ticket fares are about 70 RMB for second class seat to 90 RMB for first class seat.

Those going to the Canton Trade Fair or Chimelong Resort/Safari Park might find it convenient since it can now be accessed directly from the Shenzhen Futian financial district.

It is also convenient for going to places in Bao'an such as Bao'an Airport. See Shenzhen North Station to Guangzhou bullet train>>

Less convenient to/from Hong Kong and Luohu: The problem with Guangzhou South for those coming and going from Hong Kong is that it takes longer to reach Futian Station or Shenzhen North from southern Shenzhen. For those travelers, the Shenzhen Station's fast train to Guangzhou East is more useful.

Note about the train classes: The bullet trains from this station are G and D fast trains designed to travel about 350 kph or 250 kph respectively. In practice, speeds vary from line to line.

Bullet trains: Of the city's four bullet train stations, Guangzhou East Station's C-class train is the best for quick access to/from the Tianhe and central Guangzhou area and the southern part of Shenzhen and Hong Kong.

The station sprawls and is huge, but if you have questions, go to one of the counters or ask the staff. If you are new to the station, allow about 15 extra minutes for orientation. There are a lot of English-speaking staff who are used to helping foreigners.

Lead time: It is recommended that you arrive at the station about 50 minutes before departure time if you have tickets and want to get on the exact train and about an 70 minutes before if you want to get your tickets there. This will give you time to relax and take things leisurely.

Taking a bullet train is easier than conventional trains. When it isn't busy, there are no lines for tickets. If you miss your train, you can board the next one, so there is less stress overall about being on time than with a flight. There is also far less pickpocketing and thievery than at Guangzhou East or Guangzhou Station.

Station layout: It is vast and one of the biggest in China. So before you go, get familiar with these simple details:

Floor 3 Has Most of the Waiting Areas and Facilities:

Ticket and luggage inspection: Once you have tickets, go up the escalators to the third floor's vast waiting room. You'll have to pass through the security procedures.

Bullet train waiting room: Once past security, there is a huge single room like at a big airport. There are seats arranged around each exit for each line, left luggage services, and restaurants. Bathrooms and convenient hot water dispensers are available around the huge hall too. Check your ticket and wait at the right exit to wait for boarding.

Luggage storage office: You can store luggage in the left luggage offices in the waiting room. There is an office in Waiting Area A close to the Business Class Waiting Room and another at Waiting Area B close to the Special Waiting Area. The charge is about 5 to 20 RMB per bag per day.

Information and help desk: Go here for questions and complaints. They also can provide first aid, wheelchairs, and etc.

Ticket alteration counter: If you miss your train, go to the northeast corner of the big waiting room, and they can accept your old ticket and reissue one for the next boarding, and wait for the next one that often leave within just minutes. You don't even have to leave the waiting room!

Taxi or subway is the best public transport unless you are used to riding Chinese buses. Otherwise, you might get on the wrong bus or miss your stop. Guangzhou has four train stations, and each has bullet train lines. Be sure about which one you are going to and explain it to your driver clearly.

Catch taxis at the taxi stand on the first floor. There are people all around the area on the look-out for unsuspecting foreigners and offering rides, baggage handling, etc, and they may do crimes like giving counterfeit money or scams. Also, they will probably charge you much more than do these at the exit.

Legit taxis will generally pull up to the door in this designated taxi area where there may also be police and/or guards watching.

Taxi arrivals: Taxis to the station go to the east side of the station on the second floor or to the west elevated drop-off area on the third floor.

Subway to Guangzhou's Other Railway Stations

To Guangzhou East Station (广州东站): Note that these lines get packed from about 7–9 am and 5–7 pm. The trip might take 45 minutes or more including transfer (7 RMB), and you might have to push your way on board. With baggage, this is more difficult.

To Guangzhou Station (广州站): Line 2 goes directly to Guangzhou Station, but trains to Shenzhen leave less frequently and the journey time is relatively significantly longer. It is the same price to Luohu though.

Metro Lines 2 and 7 to the Main Attractions

To Zhujiang New City: The subway station is next to the CTF Finance Tower and the Guangzhou IFC Tower that are two of the tallest in the world.

You could enjoy a Pearl River Night Cruise and see these buildings at night.

To Chen Ancestral Academy: It is one of the top historical sites. Our Guangzhou and Shenzhen historical and cultural tour provides private transport and you can modify the itinerary to go to other places such as Chimelong.

To Chimelong Resort: It is the top Guangzhou attraction. The new Line 7 may be finished by 2017, and it provides quick transport. The route using Line 2 is circuitous, and it might be better to take a bus from the station there instead.

You could book tickets in the station, at the other train stations, or at many other ticket selling locations in the city. When you are trying to get a ticket, make clear to the ticket seller what station you want to use, and check to make sure the ticket is correct. Foreigners who don't speak Chinese or are unfamiliar with the process might prefer using a tour agency. You'll need your passport. See How to Buy Tickets in China

You can count on us for booking tickets. In 2015 alone, we helped over 10,000 customers obtain their tickets and facilitate their trip in China. We are available 24/7 and will have your train tickets delivered by express mail to your appointed address or hotel.

Let us do the planning and facilitate transport: See our China Train Travel Tours