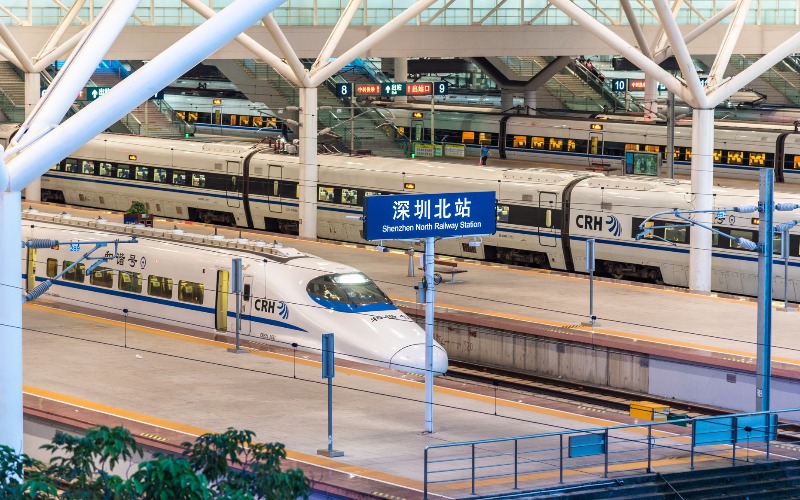 Shenzhen North Station is a modern station built for bullet trains and the subway. There are also some regular train lines. You can expect the world's fastest and most efficient train services and facilities.

Usefulness: High-speed trains from Shenzhen to Guangzhou and Hong Kong depart from Shenzhen North Station. It also serves long-distance bullet trains north towards Beijing, Wuhan, Changsha and other cities, and west to Guilin, Nanning, and Guiyang.

There is English signage and some English-speaking staff readily available to help foreigners get tickets and find the departure waiting hall.

It is recommended that you arrive at the station about an hour before departure time if you have tickets and about an hour and a half before if you intend to get a ticket there since you might have to wait in a line on busy days.

Once you have your tickets, go to the entrance/security check area where they will also check your tickets/documents. Please allow sufficient time to perform the departure procedures and check your baggage. Then enter the waiting hall.

Shenzhen North Station has a large waiting hall, with several boarding gates spread along two sides of the hall. In some cases, the boarding gate information is printed on your ticket. You can also find which boarding gate is for your train on LED screens.

You can ask staff members or other passengers for help in finding your boarding gate. Show them your ticket, and below is a Chinese phrase that you can show them:

Waiting hall facilities: There are bathrooms and hot water dispensers. There is a nursing room for mothers and babies.

See more on How to Get On/Off a Train and 7 Things to Know Before Riding a Train.

The second floor (F2): The east square has Local bus and taxi departure areas. The central building has bullet train platforms. The west square plaza has taxi and automobile parking.

The first floor (F1): The east square has local bus departure and taxi departure. The central building has the arrivals hall. The west square plaza has private vehicle parking.

The basement floor (B1F): The east square area has Subway Line 5 (Huanzhong Line). The central building has tracks for the Pinghu-Nanshan Railway. It is a conventional railroad, and there are no platforms for it.

Facilities and Services at the Station

Luggage storage: For store your luggage temporarily, passengers can go to 3F of east square to the luggage deposit desk by the side of the ticket hall. Prices start from 10-20 RMB/piece for one day. Overnight costs extra.

Luggage porters: If your baggage is too heavy to carry by yourself, you can find a "red cap" (staff members wearing red caps or red jackets) luggage porter to help you take it on your train. 10 RMB/piece.

Hotels, restaurants, and shops: These can be easily found near the station, especially in the east and south.

Generally, unless you know the city bus routes, the best way to go to and from the station is by taxi or subway. If you are unused to Chinese buses, you could get on the wrong bus or off at the wrong stop.

Be sure you are clear about which of the six Shenzhen stations you are going to.

Passengers can get taxis in front of the station. About 11,000 taxis in the city makes riding cabs convenient. Be aware that some drivers or people in fake taxis wait especially for tourists to scam you by overcharging or giving counterfeit money.

Subway Transportation From Shenzhen North to Other Railway Stations

Subway lines link Shenzhen North with Shenzhen West Station, Shenzhen Station, and Futian Station. Other than taxi, using the subway is the quickest and most convenient transportation.

This station is useful for riding long distance conventional trains.

Futian Station Station is important since it is on the future bullet train line to Beijing and Hong Kong (2018) and a major metro hub. It is the second largest metro/train station in the world. As of 2016, there are bullet trains running between it and Guangzhou South.

Shenzhen Bao’an International Airport, in northwest Shenzhen, is 36 km by road west from Shenzhen North Station. There is a direct bus to Bao’an Airport from Shenzhen North’s west square every 30 minutes from 07:00 to 02:00. It is about a 40-minute journey and will cost you 20–24 yuan.

Futian Checkpoint Port (福田口岸) is the easiest option with Shenzhen metro service as well as Hong Kong metro service on the other side.

Taxi: You can also take a taxi to the Futian Port. It will take you about 21 minutes and RMB 50.

By metro and bus: This is the cheapest way. First get to Futian or Luohu Port (see above), and then take the East Rail Line to Sheung Shui Station. Walk to Sheung Shui Square and take the A43 bus to the airport. The journey may take about 1½ hours.

See the popular train travel routes (departing from Shenzhen North Station) below to get some travel ideas for planning trips in China.

Overnight sleeper trains go to Shanghai, Wuhan, Xi'an, and other far flung destinations. These are slower and less expensive than bullet trains. These go to more cities than do the bullet trains.

You could book tickets in the station, at the other train stations, or at many other ticket selling locations in the city such as Sunshine Hotel (深圳罗湖区嘉宾路1号阳光酒) or Jieda Custom Broker (深圳盐田区政府文体中心2086号). Be clear about which train station you want to use: Shenzhen North is one of 6 in the city and one of five with bullet train lines.

Foreigners who don't speak Chinese or are unfamiliar with the process might prefer using a tour agency. See How to Buy Tickets in China>>

Station's Ticket Office: 63 ticket windows are on the third floor (F3). Open from 6:30 am to 11:30 pm, 7 days a week. The many windows ensure that there are no long waiting lines. You can go there in person to buy tickets with your valid passport. Or you can book tickets online, and then collect the tickets there.

You can count on us for booking tickets. In 2015 alone, we helped over 10,000 customers obtain their tickets and greatly facilitated their trip in China. We are available 24/7 and will have your train tickets delivered by express mail to your appointed address or hotel. For booking, go to https://www.chinahighlights.com/china-trains/, choose your destinations, and click on ‘Go.’ We will do the rest of the work!