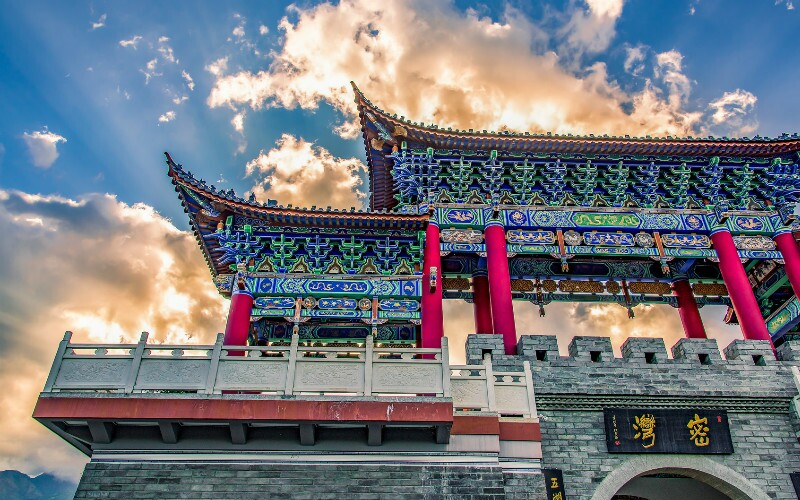 One of the 25 or so minority groups in Yunnan Province is the Bai people. The history of this small minority is very interesting. The little town of Xizhou (the name means 'Happy Town'), once a trade/academic hub, is a now a quiet town with a population of about 32,000 people. It is 18 kilometers (11 miles) north of the ancient city of Dali.

Before 1949, Xizhou Town was the main center for Bai commerce, and many families were extremely rich. The best examples of Qing Dynasty era (1644–1912) Bai architecture can be found there.

By visiting this small town, you gain a better understanding of the history of this ingenious people and an appreciation of a culture that has been important in Chinese history.

The Features of Bai Houses

Many of the houses in Xizhou Town are beautifully constructed and decorated and are some of the best examples of traditional Qing Dynasty (1644-1911) architecture in China.

They have a distinctive Bai touch, with more decorations including colorful pictures, gardens, more use of marble decorations, upturned eaves, and brighter colors.

Bai people generally decorate the gate to their gardens and houses. A traditionally-styled Bai house has a wall called the 'shining wall'. When the sun sets, the sunlight shines on the wall and then reflects into the yard, making the whole yard bright, hence its name.

Yan Family Compound (严家大院), Yang Family Compound (杨家大院), and Mansion of General Yin (尹辅成府) are typical Bai residences displaying the high artistic and architecture skills of the Bai people. These private mansions are opened to visit, but the host will charge for the visit. The open time is usually from 8am to 6pm.

Why are Houses So Well Preserved in Xizhou Town?

One of the reasons that the architecture in Xizhou is so well preserved is that the Japanese didn't invade this area. It was part of the Nationalist stronghold in southwestern China. There was even an American radar station located there that can still be seen.

The wealthy families living there paid attention to architectural detail and maintenance of their houses. Building craftsmen from Xizhou Town were famous in the region and travelled to Vietnam, Myanmar, and throughout southwestern China to build and decorate houses. The quality has stood the test of time.

Bai business families doing business throughout China built their homes richly and decoratively inXizhou. The Bai people have sought to preserve their houses and traditions. During the Cultural Revolution, an army garrison protected this town.

Shopping and Food in Xizhou Town

There is a small square in the center of the town surrounded by shops. Good souvenirs of dyed cloth or marble crafts and art may be bought there. The quality is good, but you have to bargain to get a lower price.

Xizhou baba is a must-try snack there. It is a popular local pancake which is available in sweet and savory flavors.

If you prefer a quiet environment and countryside scenery, Xizhou Town could be an ideal choice. Here are some hotels for your reference:

See Where to Stay in Dali — 7 Best Boutique Hotels to learn more. Contact us to plan a hassle-free Dali trip.

The History of Xizhou Town

Xizhou Town lies in the fertile strip of land between beautiful Erhai Lake and the Cangshan Mountains.

In this area, protected by the lake and the mountain, the Nanzhao Kingdom (738–902) and Dali Kingdom (937–1253) had the capital of their extensive territories.

These kingdoms were accomplished in architecture and engineering as can be seen from the Three Pagodas, still standing between Xizhou Town and Dali Old Town, and other sites nearby.

Later, during the Ming Dynasty (1368–1644), Xizhou Town prospered on the southern silk road, and the area's tea and marble products were traded all over Asia.

Bai merchants traveled all over Asia. Through the long era of trade in tea, horses, marble, and other goods between this part of China, Tibet, and Burma, Xizhou was an enclave for prosperous merchants, officials, and scholars.

Bai families emphasized academics, and during the Ming Dynasty scholars who passed the national examinations were publicly honored by having their names written in the public square at the center of town.

Republic and Modern Eras — "Cambridge of the East"

After the end of the Qing Dynasty in 1912, some of the wealthy families sent their children to study overseas. Many Bai businessmen became very rich. After the Japanese invasion in 1945, Xizhou was a haven for professors and Chinese intellectuals.

Xizhou Town was home to professors and scholars, and Huazhong University, which was a group of three schools, was relocated there. Two of China's most famous cultural figures, the writer Lao She and artist Xu Beihong, lived there. Xizhou was once even called "Cambridge of the East".

The scholars and businessman living there preserved and developed a reservoir of wealth, capitalism, nationalism, and scholarship that was important for the Chinese people both in China and overseas after the war.

The academic achievements of the people from this town during the past hundreds of years are remarkable. It is said that hundreds of people who were born in Xizhou have been professors in universities around the world.

With its blue water and fascinating islands, temples, and villages, no visit to Xizhou Town is complete without a trip on or around the large adjacent lake called Lake Erhai. There are a number of interesting villages in the area where travelers can stop and wander through narrow alleyways and check out rural Bai culture up close.

Only about 16 kilometers (10 miles) south are three of the most ancient, best-preserved, and tallest pagodas in China called the Three Pagodas. The oldest is 1,150 years old.

Tour Xizhou Town with Us

If you would like to include Xizhou Town in your Dali tour, feel free to contact us. Our tours are customizable, and we are ready to create a trip based on your requirements and interests. Here are our most popular Dali tour plans for your reference:

Or contact us to create a Dali tour according to your requirements.