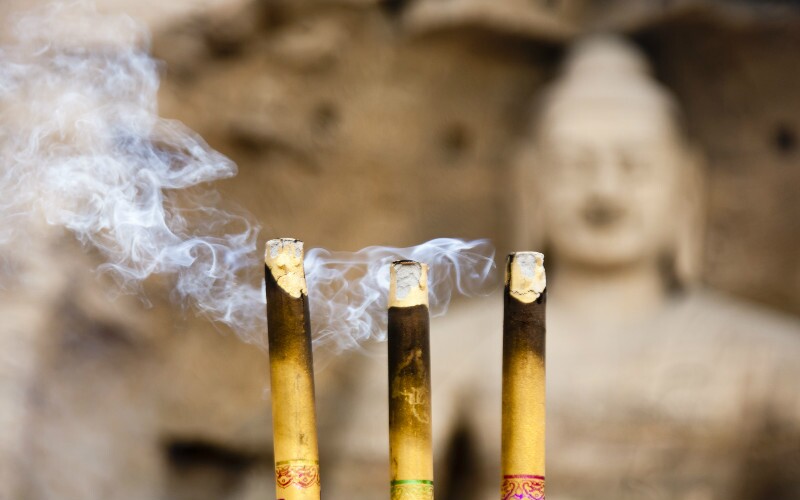 The Yungang Grottoes (Yungang Caves) are located at the southern foot of Wuzhou Mountain, about 16 kilometers (10 miles) west of Datong City, Shanxi Province, China. Dating back 1,500 years, the Yungang Grottoes represent China's superb Buddhist artistic achievements from the 5th to the 6th century.

Highlights of the Yungang Grottoes

Caves 5 and 6, in the middle part of the Yungang Grottoes, are adjoining caves excavated between 465 and 494 A.D. and the most impressive among the grottoes.

Inside Cave 5 is a 17-meter-tall Buddhist statue, the largest statue in the Yungang Grottoes.

Inside Cave 6, besides large Buddhist statues, there are 33 relief sculptures depicting Sakyamuni's biography from his birth to Buddhahood. There are more than 120 stone pagodas in Yungang. The highest pagoda with nine floors is also located in Cave 6. Cave 6 is one of the most representative of the Yungang Grottoes, with its grand scale, richness of carvings, and refined techniques displayed.

In Cave 7, there is a group of sculptures that are particularly eye-catching: six quiet and elegant Westerners, as bright and beautiful as saints, are known as the Yungang Six Beauties. They are masterpieces of carving, integrating oriental elements into Western region statues. Cave 7's roof is reminiscent of the Sistine Chapel, though it predates it by exactly a millennium.

The inscriptions on the statues in Cave 11, with a total of 337 words (characters), are the earliest and most wordy written inscriptions in the Yungang Grottoes.

Cave 12 is commonly known as the 'Music Cave'. The shapes of the musical instrument and performer sculptures in the cave, as well as the composition of the groups, embodies the style and social music system of the court of the Northern Wei Dynasty (386–534). They are precious materials for studying the history of ancient Chinese music.

The 'Five Magnificent Caves' are beautifully carved and colorful. They are a precious resource for studying the history, art, music, dance, calligraphy, and architecture of the Northern Wei Dynasty and one of the most important parts of the Yungang Grottoes.

Created in the years 460–470, Caves 16–20 were the first group of caves to be cut out in Yungang. They are called the 'Tanyao Five Caves' because they were formed under the management of the famous monk Tanyao. The center of each cave was endowed with a huge carved Buddha statue, symbolizing five of the emperors of the Northern Wei Dynasty.

The Giant Buddha in Cave 20 is the symbol of the Yungang Grottoes.

The 'Tanyao Five Caves' were the first crowning achievement in the history of Chinese Buddhist art, with their strict layout and harmonious style.

The Giant Buddha in Cave 20

The Yungang Grottoes were first carved out of the sandstone cliffs of Wuzhou Mountain in 460 AD during the Northern Wei Dynasty (386–534). The main construction spanned about 60 years, and they were mostly complete in 524 AD.

How to Visit the Yungang Grottoes

There are many amazing caves in the Yungang Grottoes. It is not possible for you to explore all of them in a day trip. Usually, a visitor's time in the caves is about half a day. Make sure you do not miss the highlights of the Yungang Grottoes in the limited time. Tour with us and your private guide will suggest the best travel route for you according to your interests.

The Layout of the Yungang Grottoes

The Yungang Grottoes are almost always visited together with other attractions in Datong, such as the Hanging Monastery and Nine-Dragon Screen Wall. Contact us and we will customize a Datong tour including the Yungang Grottoes for you.

Best Times to Visit the Yungang Grottoes and Datong

The Yungang Grottoes could be visited all year around, but normally from April to October is the best period to see the grottoes and visit other attractions around Datong.

Datong has a temperate continental monsoon climate with distinct seasons, low rainfall, a short summer, and a long freezing winter.

Datong's summer (June–August) weather is mild, the average temperature range is 17-28°C (62–82°F), and rainfall is concentrated in the summer. Datong's summer is relatively cool and comfortable, so Datong is a good summer destination.

In spring/autumn, (April–May/September–October), the temperature rapidly rises/drops and changes often, the average temperature range is 3–23°C (37–73°F), and it is often clear and sunny.

Whenever you want to travel, just contact us and we will tailor a trip for you.

The Yungang Caves are a holy land for Buddhists, so please be respectful and do not make any loud noises during the trip. Smoking is forbidden in the Yungang Grottoes area, as is UAV (drone) flying.

Yungang is in the loess plateau area, so it experiences big winds and silt-storms, especially from March to June. It is recommended to bring a hat and scarf that's appropriate to the season.

Yungang is dry in summer and the sun's ultraviolet rays are strong. Please drink more water and prepare sunscreen.

In addition, there is a big temperature difference between morning and night in Datong. Please prepare a jacket etc. appropriate to the temperatures above even if you travel in summer time.

There are many cultural creations on sale in Yungang Grottoes Scenic Area and you can buy some souvenirs if you wish.

How to Get to the Yungang Grottoes

The Yungang Grottoes are about 50 minutes' driving west of Datong city center. If you want to get to the Yungang Grottoes, you have to get to Datong first. You can take a flight to Datong Yungang Airport from 25 China cities including Beijing, Xi'an, Shanghai, Chengdu, Hangzhou, Chongqing, Xiamen, Yinchuan, and Urumqi.

After arrival, you could take a taxi from Datong to the Yungang Grottoes. Or contact us and we'd be happy to arrange a comfortable transfer and well-guided Yungang Grottoes visit for you.

Discover More About Datong on a China Tour

Datong, a city between Beijing and Xi'an (and easy to combine with them on a China tour), played an important role in imperial China. See our customizable 4-Day Essence of Datong and Pingyao Tour itinerary for ways to get more out of your time there.

For a tailor-made Datong/China tour, please do not hesitate to tell us your interests and requirements.