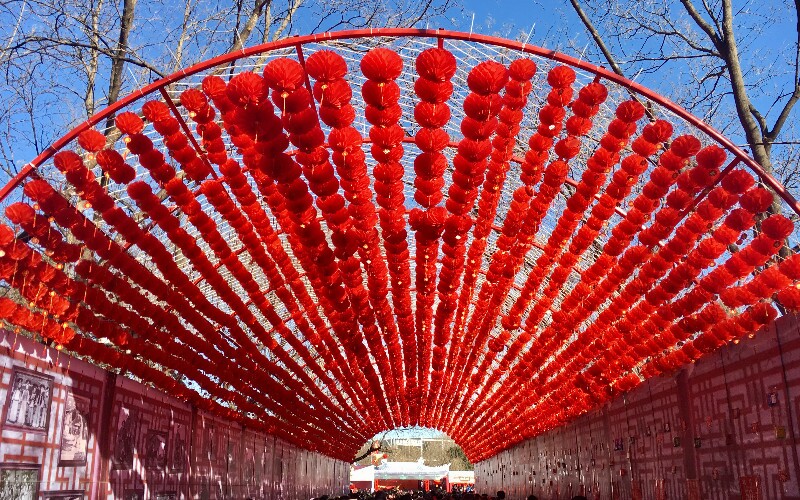 Lion dances are a popular Chinese New Year activity that may be seen at temple fairs.

Many people go to Beijing's traditional temple fairs during the Spring Festival (Chinese New Year) for ritual praying, entertainment, snacks, and buying crafts. They are a great opportunity to experience local culture and traditions.

Below is a list of the 10 best temple fairs in Beijing. (Dates and times are approximate based on previous years. Contact us for confirmation.)

Located just south of Tian’anmen Square, Changdian Temple Fair is one of the eminent fairs in the city. It's got the essential mix of food, vendors, and performances to give you the authentic fair experience.

There you'll find all kinds of stands selling art, calligraphy, tea, and other goods, while food vendors push carts through the crowds selling numerous local favorites.

For visitors who want to have an authentic northern Chinese festival experience, the Changdian Temple Fair is a vibrant, energetic celebration that welcomes Chinese and foreigners alike.

The fair has many stages filled with a variety of traditional and modern entertainers. A Chinese lion dance takes place in the streets during the festival. Also there are hundreds of booths selling food, handicrafts and antiques. The fair area is contained in one area. This is a great place to try a great variety of snacks from different regions of China, with a wide range of food booths.

Temple of the Earth at Chinese New Year

Ditan Temple Fair is one of the most popular and long-standing fairs in Beijing. About one million people visit it each year during the Spring Festival.

There are reenactments of worship ceremonies of the Qing Dynasty (1636–1911) to the god of earth. Besides the ceremonies, there are a wide range of folk performances and activities such as puppet shows, traditional art exhibitions, dragon and lion dances, and acrobatic shows...

Reenactment of the Qing-Style Sacred Ceremony

The scared ceremony is a unique performance at the fair. It aims to replicate the proceedings carried out in the Qing Dynasty to pray for peace and prosperity of the nation.

At 10 a.m. daily, the audience can participate in performances on the first to fifth days of this year of the Monkey (February 8–12). Two visitors will be randomly chosen on a daily basis to take up the role of the emperor presiding over officials performing the sacred rituals.

It is said that of all the temple fairs in Beijing, the temple fair at the Temple of Earth has the best snacks. Every year numerous vendors will sell more than a hundred types of Chinese snacks, especially Beijing local snacks. Some of China’s most-honored brands can be found there.

There will be groups of both local and regional artists at the fair, putting on carefully rehearsed performances.

Traditional wood carvings, incense sachets, silk embroidery works, and other handcraft articles can be found in the Chinese handcrafts section. There will be live handcraft during the fair. The audience can observe the meticulous procedure of creating an elegant art piece.

Dongyue Temple Fair had started as early as the Yuan Dynasty (1206 – 1368). The culture of "Fu" has been the essence of this fair. Many activities are centered on the "Fu" culture. Visitors can pray for good fortune at the altar, walk on the "Fu" road, or hang a "Fu" card to invite "Fu" for the coming year. Colorful folk performances, artwork displays, and snacks are also available.

Temple fairs are popular activities in many parts of China during the Chinese Lunar New Year celebration (Spring Festival). Happiness is celebrated at the Dongyue Temple Fair, one of the oldest temple fairs in Beijing.

The dates of the temple fair fluctuate with the Chinese lunar calendar, falling in late January or February. The fair always starts with a blessing ceremony, since the fair’s theme is about seeking blessings. Attendees pray for good fortune for the coming year.

The temple and grounds around it are decorated with the character 福 (fu), which means 'blessing' in Mandarin. People can buy fu cards to take blessing home with them. Since the temple is now a folk customs museum, an extensive array of activities centered on this theme take place.

The temple covers 60,000 square meters with more than 600 rooms and halls. The temple was affiliated with Taoism during its days as a religious center. Its name Dongyue is used for the god of Mount Tai.

Converted to a folk customs museum in 1995, Dongyue Temple is located at 141  Chaoyangmenwai Avenue, Chaoyang District, a short walk from the Chaoyangmen subway stop on Line 2.

At Wuxiancaishen Temple Fair, five brothers are deified as gods of wealth for their success hunting and prosperity.

At Wuxiancaishen Temple (五显财神庙, 'Five Prominent Wealth Gods Temple')  there are five gods of wealth enshrined and worshiped. It is an important activity for many old natives of Beijing to come to the temple to pray every year from the second day to the sixth day of the first lunar month.

Early on the morning of the second day of the first lunar month, people usually go to the God of Wealth Temple. They burn incense to pray for good fortune in the next year.

After worshiping you can also taste some local Beijing snacks in the temple.

According to historical records, the five  gods of wealth were five brothers with the surname Chai. The five brothers were hunters, and they always gave away the leftover meat of the wild animals they hunted to poor people, and they usually gathered herbs to cure wounds and treat illnesses for people. They were so admired by people that they were named immortals after they passed away, and were called 'the five prominent gods of wealth'.

Visit Wuxiancaishen Temple as part of a China Highlights Beijing tour, especially recommended if you are traveling around Chinese New Year.

Baiyun Temple Fair has an enduring popularity with locals who come here to throw coins at a stone monkey and a bell to invoke a blessing.

Visitors can attend many folk activities, enjoy the local snacks, purchase folk handicrafts and appreciate exhibitions of paintings. It attracts millions of visitors from all corners of the world each time.

Initially serving as an important fair for the Taoists, Baiyun Temple Fair is now celebrated by the locals, whose highlights include the following activities:

The legend went that the highly-learned Taoist Qiu Chuji (a legendary figure in Taoism) would descend to earth and release people with an affinity from suffering on the 19th of the first lunar month each year. As a result, pilgrims from all corners of the world vie with one another to pay a visit to the temple to pray for good luck and fortune, and they call it Meeting the Immortal.

Throwing Coins through a Hole

There's a wood coin of one foot in diameter hanging at the entrance of Han Cave inside the Mountain Gate, which is painted golden with a bronze ring in the center. The visitors are encouraged to throw coins at the ring, and those who hit it are considered to be lucky in the coming year.

Walking through the arched mountain gate, visitors will see a stone monkey before their eyes. It's said that those who touch it will avoid illness and evil spirits in the coming year.

Yuanjun Hall is an ideal place for infertile women to pray for babies from the Lady Queen Mother, and those who pray sincerely will have a baby in the coming year, according to the traditional belief of Taoism.

In addition to the activities above, it's a good idea to try riding a donkey or sitting in a bridal sedan chair to travel around the fair. Not only can visitors taste local snacks such as steamed dumplings, fried bean curd and millet pastes during the fair, but they can also appreciate the traditional Peking opera, lion dancing, dragon dancing, stilt walking and kung fu show, and over 1,000 riddles which are waiting to be figured out by visitors.

For those who are interested in the traditional Chinese calligraphy, it is highly recommended to purchase writing brushes, ink sticks, paper and ink stones.

If you are interested in visiting Beijing to participate in Baiyun Temple Fair, why not combine it with one of China Highlights' most popular Beijing tours. Or contact us and let us design your own Beijing tour based on your requirements.

Want to experience a more subdued, authentic temple experience? Escape the crowds in the city center and take a bus out to Hongluo Temple in Huairou district. Take part in prayer meetings and connect with Buddhist culture, or enjoy the dance troupes and traditional snacks in the scenic temple courtyard.

Old Summer Palace Temple Fair has a long history. In the Ming and Qing dynasties, especially during the flourishing reign of Emperor Qianlong (1735–96), apart from granting banquets and rewards to the dukes and ministers by the emperor, various kinds of celebratory activities would also be held in the palace, such as light operas, wrestling, equestrianism, acrobatics and fire performances.

With the theme of "experiencing royal life" and on the basis of traditional temple fairs, it is a distinctive temple fair in Beijing. Displaying the unique culture of the royal family and Manchu people, there are decorations of palace lanterns, dragon columns and dragon flags.

Lotus Pond Temple Fair officially launches activities from the second day of the first month of the lunar calendar. On the early morning of that day, the majority of the people who go to Mammon Temple to pray are on bikes, except for the tycoons and high officials. They wear silk cotton-padded gowns, with mandarin jackets or sleeveless jackets on the outside and small felt hats on their heads.

At around one mile away from Mammon Temple, booths selling incense, red candles and joss papers are ubiquitous on the roadside. The first thing to do after stepping into the temple is to worship Mammon. With incense smoke and lit candles all around, a melodious bell also peals out in the temple.

Grand View Garden, known as Daguanyuan in Mandarin, is a garden straight out of the pages of “A Dream of Red Mansions”, a classic Chinese novel. It also is the site of one of many Beijing festivals that are part of Spring Festival celebrations.

Grand View Garden was created in the 1980s, with features based on the the 18th century novel. The TV series “A Dream of Red Mansion” was filmed there, amidst the artificial ponds, carefully landscaped gardens and palaces that cover 32 acres. The Beijing Red Mansion Culture and Art Museum is located on the grounds.

A variety of activities take place during the festival. Visitors should go early so they won't miss the big parade, a scene from the novel, that starts the day. The parade is led by Yuanchun, who is returning home after becoming an imperial concubine.

Entertainment inside the garden includes singers, dancers and acrobats taking the stage. Hungry visitors can munch on a variety of snacks as well as play Chinese-style carnival games.

The festival is a popular event, drawing large crowds. It's a good idea to go early to see everything before it gets too packed.

Da Guan Yuan is located at 12 Nancaiyuan Street, Xicheng District, in southwest Beijing. Buses 474, 122, and 84 stop at Daguanyuan, while Te 12 stops there and at Daguanyuan Ximen (the 'west gate').

See Temple Fairs at Chinese New Year in Beijing with Us

Include a temple fair in a Beijing tour with China Highlights around Chinese New Year for a truly memorable cultural experience.