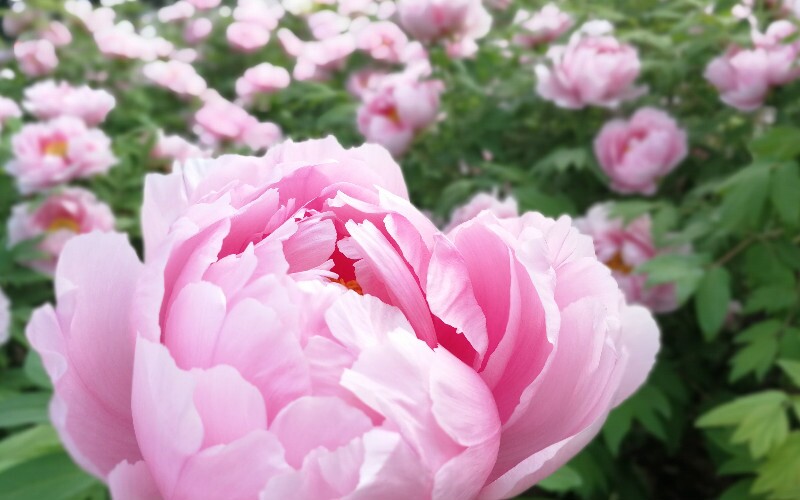 Luoyang Peony Festival is very popular among Chinese tourists and peony enthusiasts the world over. Each year from mid-April to mid-May, the peonies are in full bloom, generally reaching their peak during the period April 15th-25th, which is the date set for the annual festival. During the peoy fair, gardens are awash with colorful flowers mostly reds mixed with whites, yellows and purples set against a background of thick, vibrant, dark green leaves, like a myriad of precious stones set in bright, shiny rings. In addition, there are various folk performances staged in the gardens.

Luoyang City is located in west Henan Province in Central China. Besides seeing peonies, famous tourist attractions include White Horse Temple and Longmen Grottoes. Luoyang City is only 1 hour by train to Zhengzhou City, where the world famous Shaolin Temple is located. Luoyang City is by train 4 hours from Beijing (Great Wall of China), 8.5 hours from Shanghai (The Bund) or 4.5 hours from Xi'an (Terrocotta Army). Flights are also available between these cities.

The main venue of the annual Luoyang Peony Festival is Luoyang National Peony Garden, located in the town of Mongshan on the outskirts of Luoyang. China highlights has listed the following gardens to see the peonies. Luoyang National Peony Garden is one of the oldest gardens to grow and reproduce peonies in China. It is divided into North Garden and South Garden. There are over 1 million peony trees of 1,200 different kinds. The peony blooming here is highly reputed for its big flower, flamboyant color, numerous species and lasting florescence.

Getting there: take bus No. 51 Bloom Date: The initial bloom stage for peonies growing here is around April 9th every year; the middle bloom stage is from April 14th to 20th and the late bloom stage can extend to early May.

Getting there: take bus No.56 or 58 and get off at White Horse Temple Station. Xiyuan Park was built on the site of Xiyuan Ruins, the palace of Emperor Yangdi during the Sui Dynasty. The park accentuates a theme of "watch peonies and appreciate bonsais" and launches many special tour activities related to the theme. Inside the park different kinds of peonies and oddly shaped bonsais are integrated into an exotic world of peony garden work.

Blooming date: early peonies and peony bonsais will be in bloom at the beginning of April. Usually the full bloom stage is around April 16th every year. The late peonies can flower in early May. The garden is located in the west of Museum of Ancient Tombs is a peony viewing garden with a long history and a rich peony culture. Visitors can watch rare peonies of over 200 kinds in bloom at the park. Besides, Luoyang National Garden is famous for its 150-year-old “Changsouhong” (red peony) and 120-year-old "Changsouzi" (purple peony).

Getting there: take bus No.83 and get off at the intersection of Wangcheng Avenue The park covering 50,000 square meters gained its name from its location on Wangcheng Ruins, the site of the Capital City of Zhou Dynasty (11th century BC-221BC). It served as the venue for the first Luoyang Peony Festival and as the main venue for the proceeding Peony Festivals every year. Inside the park there is one of the biggest zoos in Henan Province. Visitors are able to view over 10,000 peony trees of 858 different kinds with various colors in bloom.

Blooming date: peony bonsais in the greenhouse will be in bloom in early April; nearly all kinds of peonies will be in full bloom from April 9th to 25th; the rest late species usually flower during the May Day holiday (May 1-7). Luoyang International Peony Garden grows more than 600,000 peony trees with 600 different kinds. The flowering date is usually 3-7days later than other peony gardens because the climate is colder there. However, this peony garden is highly reputed for its big flower, long flowering date and flamboyant colors. In addition to the display of rare peonies from home and abroad, the garden also holds a large exhibition of Chinese herbaceous peony.

Blooming date: some kinds of peonies grown in the greenhouse will first bloom from April 5th to 10th; 50 or so kinds of rare peonies will be in full bloom from April 11th to 20th; another 400 species usually flower from April 21st to May 10th.

Special flowers: the garden has developed a kind of peony which can flower 5 to 6 different species of peonies in one tree.

Getting there: take bus No. 27 or 83 and get off at International Peony Garden China National Flower Garden is located at the south bank of Luohe River between Luoyang Bridge and Mudan Bridge. Over 200,000 peony trees of 600 different kinds are grown in the garden.

Blooming Date: The common flowering date is around April 12th; mid-term flowering period is from April 15th to 20th; some late peonies usually flower from April 21st to early May.

Other Events: folk culture performances will be held during the flower fair. Blooming Date: The early flowering date is from April 3rd to 8th; most peonies will be in full bloom from April 9th to 25th; late peonies usually flower from April 26st to May 5st. Luoyang Tulip Garden grows over 500 different kinds of peonies of various colors and over 1 million tulips of 80 kinds.

Blooming Date: Some kinds of peonies such as Luoyang Red, Meiwang Red and Ziban, are usually blooming from April 3rd to 10th; some peonies like Roufen, Banyahu Red will be in full bloom from April 11th to 25th; late peonies usually flower from April 26st to May 7st. Luopu Park is the biggest park in Luoyang City. About 20,000 peony trees of 50 different kinds are grown along the Mudan Bridge (Peony Bridge) at the middle part of the garden. The highlight of this garden is the vast area of colorful peony garden, which displays peonies of all the nine color systems, including red, pink, purple, yellow, white, blue, green, black and compound colors.

Blooming date: more than 5,000 peony trees will first bloom in early April; almost all peonies are in full bloom from April 10th to 18th; some peonies can also flower during the May Day holiday (May 1-7).